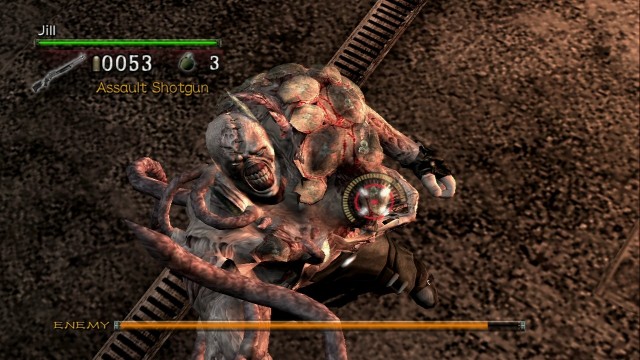 When Cap’n Abner gets PR regarding anything Resident Evil, he more or less forwards it directly to me. I suppose I’m this crew’s in-house RE expert, if not the franchise’s biggest fan in these parts. So when he offered me review codes for the new PSN-exclusive HD remasters of the Umbrella Chronicles and Darkside Chronicles light gun games, I of course graciously accepted them. Well, not quite. Because at first I thought they were Move-only titles, and I balked since I don’t have Move. But I looked over the press and the ad copy in the PSN description and it stated that you could use a standard controller.

Now, mind you, I played and more less enjoyed these games on the Wii so my experience with them was mostly low-definition and with a Wiimote acting as an ersatz firearm. The first impression I had of the new editions were good because the HD remastering is well done and everything looks nice and crisp. The RE atmosphere shines through, and as fan affairs these are fun games with lots of classic franchise elements re-contextualized to work as an arcade style, on-rails light gun game with some neat depth- upgradable weapons, melee counters, huge boss fights, and lots of secrets.

If you’re not familiar with the Chronciles concept, both of the games take you on a guided tour through familiar settings as you blast away at familiar faces with familiar characters ranging including Chris, Jill, Leon, and freakin’ Jack Krauser. Umbrella Chronicles covers ground from Zero, the original RE, and the third game. Darkside Chronicles features material from the second game and Code Veronica as well as some new areas bridging the gap between three and four.

Unfortunately, the second impression I had was that the games are well-nigh unplayable with a standard controller. Anyone suggesting otherwise is either engaging in some wishful thinking, PR, or has extremely low standards of acceptable control. Just to reiterate- these are light gun games. Do not use a controller, regardless of the suggestion that you “can”. Between the nature of on-rails light gun games, the shaky camera, reload animations, and other aspects of the gameplay, using a standard controller with a thumbstick moving a cursor around the screen completely takes all of the fun out of the game- and in fact makes certain parts almost literally unplayable.

I suppose it’s possible to get through them if you play on easy, but even at that difficulty and with the aim assist on it’s a painful exercise in watching your cursor flitter all over the screen with incredible imprecision. Good luck racking up headshots and hitting the various blink-and-you’ll-miss-them props and targets that yield bonuses, ammo, and other goodies. You’ve got to play these games with Move. Seriously, if you don’t have Move, don’t bother. If you do have Move…why do you have Move?

So this is something of a silly review. I’ve played these games and I like them, I think if you have Move then these are good buy at $25 for the pair. But if you don’t have Sony’s motion controller, then these games are completely pointless for even the most dedicated RE fan.