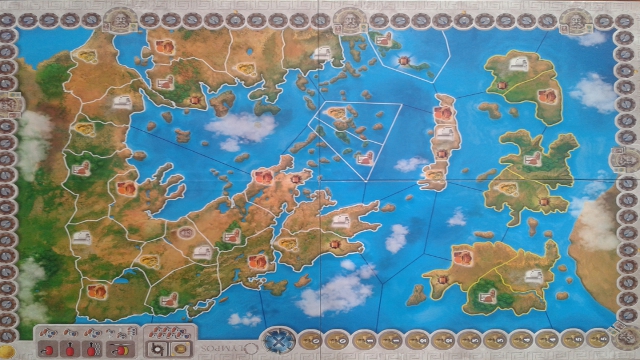 Boardgamers, as a rule, have “go to” games. These are the games that can be slapped on the table on almost any game night without objection. My list of “go to” games isn’t terribly long and it can take a while to break into the coveted spot of, “I will never sell or trade this game, ever.”

Railroad Tycoon/Railways of Europe, Shogun, Blood Bowl 3rd Edition, Fire & Axe, Age of Empires III, Cosmic Encounter, Chaos in the Old World, Cyclades, King of Tokyo, Brief History of the World, Battlestar Galactica, The World Cup Game, and maybe a few two-player games like Twilight Struggle, Hannibal, and Warriors of God round out the list but that’s about it.

Of the over 200 games I have in my basement (and this is after the Great Selling Purge of 2012 that went down a few months back) the above games comprise my “do not touch” list. I play, and enjoy, a lot of games but the above list make up my core even if I don’t get to play them as often as I’d like. (I really need to play some Hannibal come to think of it…)

Neuroshima Hex was removed from the list due to the iPad app. I doubt I ever play the actual boardgame again because of it. I suspect the same will happen to the C&C games Matt’s been reviewing here lately. I own them all…and they sit and collect dust. The thought of playing Nightfall or Ascension on the table …never again.

The best thing I can say about Olympos is that it’s teetering on gaining entrance to this exclusive club.

It combines some of the things I like about Eurogames but adds that all important direct conflict element, is far from being a multiplayer solitaire game, adds a factor of randomness that ensures a slightly different game every time you play it, and an easy and smooth playtime that fits snuggly in less than two hours after you are familiar with how it all works. It also clicks with three players, which can be the number of death for a lot of games.

In Olympos, you play a fledgling civilization attempting to settle the Greek mainland and its islands – and if you continue south the famed areas of Atlantis. By acquiring various technologies such as mapmaking, hoplites, medicine, and so on, and possibility even building a Wonder, you grab land, gather up various resources, and collect the ever popular victory point. (There is no VP track here so you never really know who is winning.)

There is a track, though. In fact is it the Time Track that drives the game. Unlike most games, Olympos allows for a non-specific number of actions per turn and each action you perform costs a specific amount of “time”. Slapping down one of your settler discs north of Greece in preparation to move inland costs two units of time; kicking out a rival settler costs time; discovering a new technology costs a lot of time. (Seven units in most cases.) Each unit of time you use on a turn moves your time marker further along the Time Track. Most importantly, there is no set turn order – everything is based on your position on the track so you can take as many turns as you like as long as your marker is behind everyone else’s. Conversely, if you do too much on a turn it’s going to be a while before you get to go again and by the time that happens the landscape of the game may have changed significantly.

Also scattered along the Time Track are the Greek God triggers. The first marker to pass or land on a trigger summons one of the Greek Gods to either punish those you haven’t researched religious techs or reward those who have. So there is a strategy involved in racing to the God triggers while also not getting too far ahead lest you sit and watch everyone else perform actions for 15 minutes. There is a juggling act in how to manipulate that Time Track and until you learn how to use it you are likely to lose a lot of games of Olympos.

Olympos is all about timing.

Everything in the game centers on time – even combat. Attacking a rival settlement (ie. a colored disc of a rival player) is simple. The attacker always wins. Period. It’s just a question of how long it takes. If both civs have an equal number of military techs researched it takes two time units. Weaker civs will burn three time units to take a settlement. On the other hand if my civ has researched the phalanx for instance, and my opponent has no military techs then it just takes one time unit to conquer his land, thus giving me the resource of that land as well as the territory itself (which earns VPs at the end of the game).

It took me a while to wrap my head around the fact that the attacker will always root out the defender but retaking land is as easy as walking right back and snatching it – it all depends on how long it takes as to whether or not it’s worth it. Plus, the defender earns as a token reward for getting kicked out, a “pause time” token which allows you to perform actions for less time. It’s a wonderful mechanic.

The techs you research do all sorts of interesting things – much of it devoted to the Time Track. Military techs save you time when conquering; techs like cavalry and mapmaking allow for quicker land and sea movement, medicine allows new settler placement at the cost of one time unit rather than two. Other techs earn you victory points at game’s end such as poetry and philosophy. Other discoveries such as Hellenism and art reward you with religious symbols that protect you from the wrath of the gods.

The techs/discoveries are placed on a separate board at the start of the game. They are randomly placed along various sections so that each game the resource demand to discover them changes. So one game astronomy might require two marble units and the next it might require gold. This is key because the map itself changes from game to game as one player will, at the start of each game, “cross out” a handful of lands making them uninhabitable. So what was prime real estate in your first game might be unusable in your next. In my last game of Olympos the start player basically crossed out all of Atlantis which made boat travel almost unnecessary thus making mapmaking and astronomy weak discoveries. 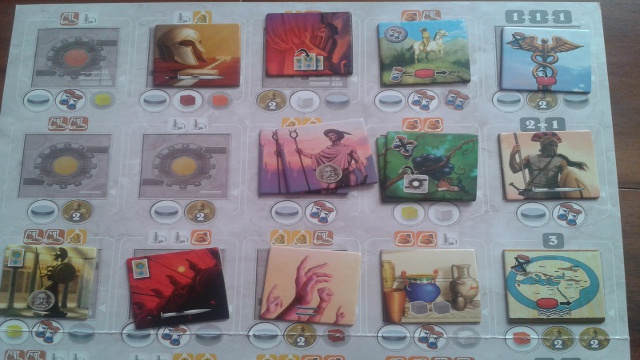 What makes Olympos such a wonderful game is that while at its heart it’s a straight Euro, there is enough direct conflict from the screwage that can occur on the time track to the swooping in and stealing of precious resources that you are likely to end a game of Olympos downright mad at someone at the table. I have yet to play a game of Olympos that did not result in at least one player saying to another, “That was a real dick move.”

There are a few barriers to entry though. While mechanically this is a very simple game, there are a lot of moving parts and its use of symbols is everywhere and it can be needlessly confusing to learn. Also, with the number of techs/discoveries it’s a daunting task to figure out how to play the game effectively. It’s easy enough to move, research, etc. but to be good at Olympos will require multiple plays in order to understand not only how best to use the time track but also how which items to discover – and when.

This is also a game that can slow down if you have someone prone to analysis paralysis. When you get down to it this is a game not about building a civilization but about land grabbing and using as little time to do it. I have seen players study the boards (the main board and the tech board) for a long time trying to find the “best” move.

Designer Philippe Keyaerts is best known for the Days of Wonder hit Small World, but I would, without question, rather play Olympos. It hits that sweet spot of being a Euro/Wargamre hybrid with enough of a random element to avoid getting stale.