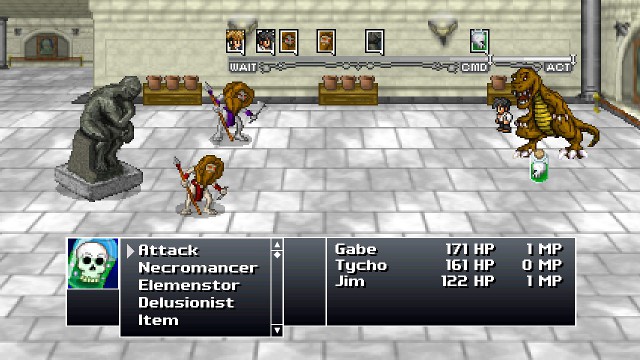 Penny Arcade’s first two Precipice games were quasi-real time affairs, animated and written in the style of the popular webcomic, Penny Arcade wit and all. For the third game, Cthulhu Saves the World developer Zeboyd took the property in a less graphical, more turn based direction, but kept the series’ trademark sense of humor. That sense of humor will go a long way towards determining how much you enjoy the game. If you’re not a fan of the comic, the straightforward nature won’t draw you away from other RPGs any time soon. On the other hand, if you find yourself repeatedly hitting F5 every M-W-F for the latest strip and post, Rain-Slick 3 is a nice mix of wacky humor and solid RPG mechanics. 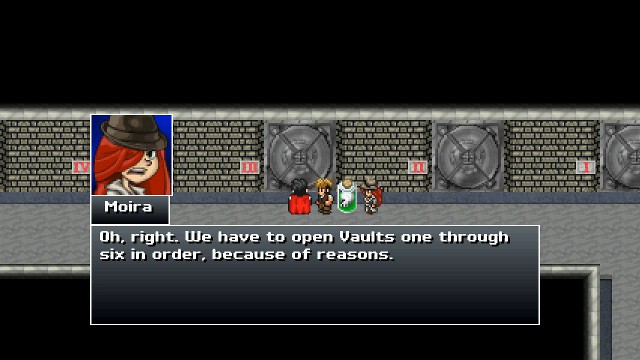 I should note that I find myself firmly in the latter camp, so take that into consideration when reading this review. I should also point out that while I really enjoy the comics, I go to the site three times a week for Jerry Holkins’ posts. In fact, many the time have I gone, read the post, re-read the post, wished I could write like that and then left before even reading the strip. Holkins wrote Rain-Slick 3, as with the other games, and between the game’s dialog, the excellent characterizations of haughty genius Tycho and punch-happy idiot Gabe, and the hilarious enemy names and descriptions, I laughed out loud plenty of times. What can I say? I’m a sucker for a good Optimus Mime joke.

Rain-Slick 3 is an RPG in that your characters have different classes, they level up and you take turns in battles, but if you’re looking at a deep adventure filled with tons of side quests and optional activities, this ain’t it. The plot moves you along pretty briskly as Tycho, Gabe, Tycho’s PI ex-wife Moira and mystical skull-in-a-jar Jim work towards preventing an apocalypse of Lovecraftian proportions. The mime cultists and filthy hobos of the previous games make a return, as does Dr. Raven Darktalon Blood. Obviously, if you’re coming in cold, you’re going to be a little confused, even with the game setting up events, but as this is the third game in the series, it’s not unreasonable for it to expect that the player knows what’s going on. 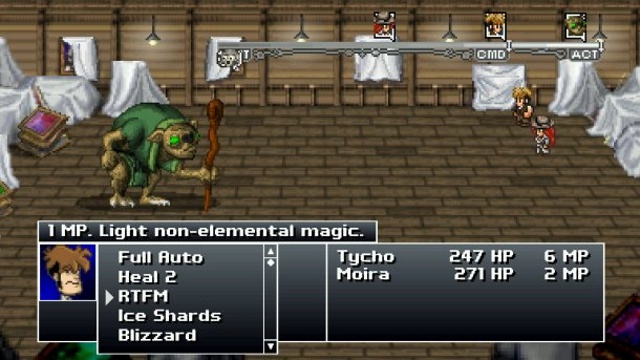 The game uses a combination of Final Fantasy class and occupation combinations and Grandia style action bar queuing to help you punch your way through an army of monsters and filthy mimes. Each character can take on two additional occupations, drawing from as eclectic a group of jobs as you’ll ever find. The Crabomancer specializes in defense, the Masochist can injure enemies at the expense of their own hit points, the Diva does damage at the expense of their team’s health, the Gardener can plant gardens that continuously dole out damage, health or magic points and the Apocalyptic can call forth prophecies that rain down fire, ice and poison once it comes up on the action bar. With three classes per character and four characters to manage, there are more combinations that you can possibly go through, but thankfully the experience system makes playing around with the various occupations a breeze. Any unequipped occupation levels up, albeit at a slightly lower rate than equipped occupations, which means you can always switch up your occupation and not feel like you’re going to go into a fight with an underpowered crew.

This is a good thing as the game is more than happy to throw large groups of monsters at you, each with hit points that range in the thousands, sometimes tens of thousands. Early on, you can pretty easily blaze through fights with minimal planning, but late game, managing your party as well as the action bar becomes critical. As you queue up party actions and your enemies do the same, party member and enemy portraits show up on the action bar. Once the portrait moves all the way to the right, the action is completed, be it a friendly skeleton attack, a Deep Crow attack, or your garden disgorging its army of angry bees. Managing attacks that interrupt enemy attacks and knock them further down the action bar not only keeps your team from being damaged, but also allows your team to get some licks in before they get a face full of broodlord, um, fist? Mandible? 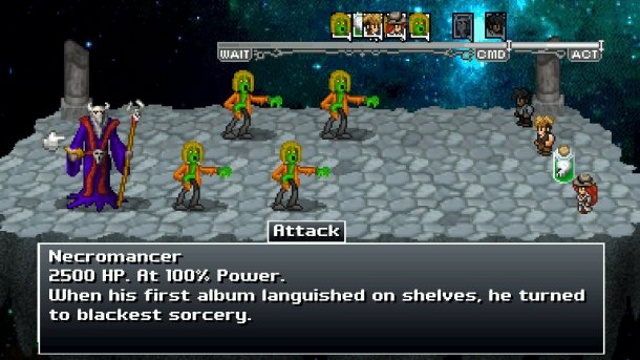 With a lack of side quests, the game feels like what it is, one battle after another, interspersed with hilarious bits of dialog and Gabe acting like an idiot. Thankfully, that’s more than enough for me as the various classes and occupations offered up enough variety to keep me interested over the length of the game. Maybe if it was 30 hours long, rather than six or seven I’d feel differently, but it wasn’t, so I don’t. The game is funny, the combat system is interesting, the classes varied and I got a kick out of seeing which Penny Arcade employee was going to show up next. I don’t know if Zeboyd’s games are all this funny, but if they’re all this solid, I have a new developer to keep an eye on. That right there is well worth the price of admission.