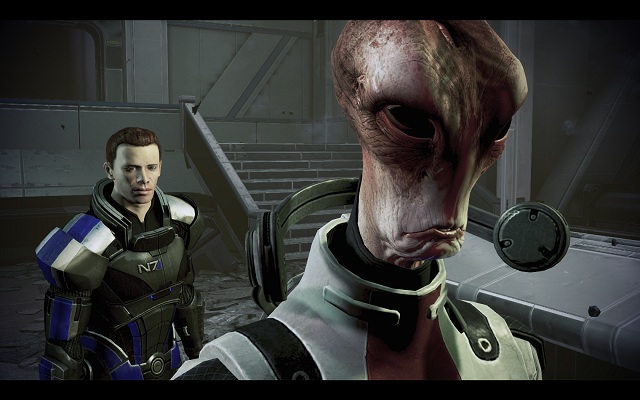 Since the release of the “Extended Cut” DLC a couple of weeks ago, I have been studiously replaying Mass Effect 3. Yes, I realize I can just re-do the ending from my first trip through the game, and I have (the very last bits anyway), but I’ve been looking for an excuse to bring forward my renegade Femshep from Mass Effects 1 and 2 and this gave me that excuse. This post isn’t about the ending, however. You’ve heard all about that already and have your own opinion. This post is about Mordin Solus, whose storyline in Mass 3 I just wrapped up for the second time.

The Solus resolution struck me on a couple of fronts. One, he’s one of the more engaging characters in the Mass Effect universe. He’s an intriguing character in Mass Effect 2 and is even better here. What makes him such an interesting case study in Mass Effect 3, however, isn’t just that he’s a great character, it’s that his story can have such radically different results based on decisions you made across all three Mass Effect games. (Yes, all three.) More impressive than that is the fact that each of the three radically different outcomes I’m aware of, are universally well done. Mordin Solus is the face of everything the Mass Effect series is capable of getting right.

In the rest of this post thar be spoilers. Ye been warned…

The climax to Mordin’s story takes place on Tuchanka, the Krogan homeworld. The humans need Turian fleet support to defend Earth, the Turians require Krogan aid on their own homeworld. The Krogan, as a condition for their aid, want cured the Genophage, a bio-weapon inflicted on them in the past that prevents them from reproducing in massive numbers. Solus, a Salarian scientist who’s worked on preserving the Genophage, has made the cure his mission. Throwing an added wrinkle into the mix is the Salarian government, who will withhold their own aid in the main fight against the Reapers if you do allow the Genophage to be cured. As Sheperd, it’s up to you to decide if you want to allow the cure to be sabotaged or distributed via a large tower on Tuchanka that is very near to collapse.

The fate of Mordin Solus can, at its simplest, be broken down into three big outcomes, though there are numerous smaller variations too:

The first time I played through this sequence I helped Mordin distribute the cure. The portrayal of his sacrifice, going to the top of the unstable tower to prevent the Salarian sabotage from succeeding, was among the two most poignant moments in the game. When Mordin enters the elevator, turns to face Sheperd and says with genuine conviction and warmth, “Anyone else might have gotten it wrong,” I get chills.

It’s a noble end to a noble character. The Krogan are cured and will be able to resume making babies, presuming the galaxy survives the Reaper threat. They’ll also lend their aid to the Turians, freeing the Turians to aid Earth. It’s a win-win-lose situation, however, because it also means Sheperd loses the support of the Salarian government. As Sheperd, you have to ask yourself, are all your so-called “principles” worth it if not getting Salarian aid means defeat at the hands of the Reapers.

(Note: the actual numbers, in terms of breaking down war assets, are a bit more complicated than I describe them here. I’m basing this on what knowledge Sheperd has at the moment he/she is making decisions. If you want a more specific breakdown of the actual consequences, check out the “Aftermath” section on this page of the ME3 Wiki.)

If you play out the Renegade path, Mordin discovers the Salarian sabotage of the Genophage cure, also realizing that you are complicit in it. He isn’t shocked by this revelation, just sad. At that point you can try to talk him out of going up the tower, but excepting some very specific circumstances, he won’t listen to you. From there you can only let him proceed or shoot him. If you shoot him, he still goes to the top of the tower, but doesn’t have the strength to drag himself to the control console before he dies. What’s wonderful about this choice is that if you’re really playing Sheperd as the renegade, and not as pure evil, there’s ample reason to shoot him. Throughout the series it’s easy to play Sheperd as pro-genophage. The Krogan are a very real threat. Support of the Salarian government can also be viewed as critical to the cause. If you sabotage the cure you get the aid of the Krogan (who don’t know the cure is sabotaged) and the Salarian. That’s a Machiavellan power-play that’s all too easy to see Sheperd willing to make. The only question is, are you willing to kill one of the good guys to make it happen?

Compared to the Paragon sequence above, there are two brilliantly powerful lines from Mordin here. One, when he uncharacteristically shouts “I MADE A MISTAKE!” in regards to preserving the Genophage and then destroying Maelon’s research into a cure. Mordin is not a guy who makes mistakes. To hear the emotion when he’s force to admit this realization, out loud, is a stirring moment. It’s followed-up a moment later when he also uses the line “Anyone else might have gotten it wrong.” It’s the same line as in the Paragon scenario, but it’s a completely different context and delivery and the contrast is stunning. This isn’t bravery mixed with humorous resignation. This is anger and betrayal justifying precisely why he has to do things himself.

The fallout if you do this, which isn’t shown here, is also amazingly well done. The cure fails, but the Krogan have no idea. As Sheperd you look Wrex right in the face as he expresses his gratitude to you and his admiration of Mordin. When you return to the Normandy there’s an additional dialog with Garrus in which he, too, expresses his respect for Mordin’s sacrifice and you have no choice but to make like his was a noble sacrifice, all the while knowing you murdered him in cold blood.

It’s also an incredible moment because there’s an argument to made you’ve done the *right* thing. Leaders in a war have to make sacrifices. At what point do the ends justify the means? Role playing a Sheperd who will do anything for the cause ought to make these choices easy, but they were anything but. I knew what the Sheperd envisioned in my mind would be willing to do. But what was I, as the player, willing to do? It was genuinely hard to make the choice to pull the trigger, but the payoff in the story made it entirely worthwhile. I felt genuine remorse in the aftermath of the murder, but better than that, I could see that same bitter remorse reflected in my character on the screen.

READ ALSO:  A Story about Stories

The third scenario, in which you talk Mordin out of trying to stop the sabotage of the Genophage cure, is also striking in that it requires a very specific pattern of decisions on Sheperd’s part, reaching across all three games. In Mass 1 you have to have crossed and killed Wrex. In Mass 2 you have to have destroyed the cure research data of a corrupt Salarian scientist named Maelon. Doing so results in Eve’s death as Mordin attempts to finalize the cure. And in Mass 3 you have to keep secret the Salarian plan to sabotage the cure, right up until the end. If you do all that, and have a high Renegade rating, you can talk Mordin out of stopping the sabotage because the Krogan, without Wrex or Eve to guide them, are far too inclined to seek revenge for the existence of the Genophage in the first place. Even Mordin must acknowledge the cure is too risky. Mordin lives and becomes a war asset, the Krogan aid the Turians, and you get Salarian aid. This, in terms of pure war assets, is actually the best possible outcome and easily the hardest to achieve.

When I think about how Mass Effect 3 ended, I’m not disappointed because the story took turns I couldn’t accept. I don’t like it because there’s not nearly enough of this. It’s a whole game devoted to the collection of assets for the final battle, but the battle itself is not notably altered based on your success in collecting said assets. The battle (not just the resolution) is not in any way a cumulative result of your decisions in Mass 3, let alone all three games. Mordin Solus’s story, conversely, is a blissful example of where Mass Effect 3 gets everything right. This is Bioware at their absolute best. Choices you’ve made through all three games come together in the final moments of a pivotal part of the story and, no matter what you do, the story executes on them flawlessly, each path pulling different emotional strings appropriate to the actions you’ve taken.

And just because no post on Mordin is complete without it…

21 thoughts to “Mordin Solus: Where Mass Effect 3 Gets Everything Right”