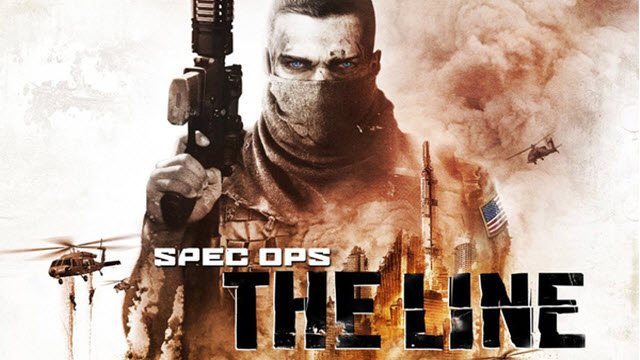 You might have heard some critics comparing Spec Ops: The Line to Francis Ford Coppola’s surrealist war-horror masterpiece, Apocalypse Now. It’s not an invalid or misguided comparison and the game is at least loosely homage to Conrad’s Heart of Darkness, the inspirational material for both that film and this game. There’s been a lot of talk about the game’s more sophisticated, psychological depiction of wartime violence and the moral toll of conflict. That too is not invalid or misguided, because it’s definitely there by intent. There are some genuinely chilling and truly horrific beats throughout the game’s six hour linear story progression as well as some compelling subtexts and an amazing setting that itself questions what gains are to be made in fighting for democracy and capitalism in the Middle East.

Nolan North- who I’m convinced is actually the name of every character he voices other the Penguin- and a pair of fellow Delta Force operatives are sent into a post-catastrophe Dubai to look for survivors of a massive, apocalyptic sandstorm that has literally buried the city’s incredible- and incredibly ostentatious- architecture. It’s fascinating, even in a video game environment, to wander the wreckage of this oil money-funded metropolitan monument to mercantilism. Abandoned supercars litter the streets. Signage for jewelry stores and designer boutiques clash with threatening graffiti and charred corpses. There is a surrealist bent that is well-appreciated. Walk over a sand dune and suddenly you’re on the ledge of a skyscraper overlooking ruins. It’s a paradise of profit laid waste by the red wrath of God.

READ ALSO:  Can You Handle Dustforce?

Like the Kurtz character in Apocalypse Now and Heart of Darkness, there’s also a military hero that’s gone rogue and has holed up in the city’s tallest building. Apparently the American 33rd division has done so with him, practically taking over the ruined city. The CIA is involved. Civilians that have not been evacuated are in the crossfire. It’s a surprisingly complicated, detailed story that almost makes you forget that the game is a by-the-numbers, completely uninteresting third person shooter that induces headshot fatigue less than halfway through its runtime.

There’s no need to enumerate mechanics, control methods, AI and whether or not the graphics look good. You’ve played this game, from the pop-and-shoot gunplay to the rudimentary turret sequence where you’ve got to defend a guy doing something. It’s a competently made, completely uninspired and un-innovative example of its genre once you peer past the exceptional writing and attention to context. Regardless of its high-minded framing, it’s just as much a machine gun massacre as a Serious Sam game is.

While I was playing the game, wondering why it took so many shots to fell the bullet-sponge bad guys (which are more often American white people than the normal Evil Brown People that antagonize these kinds of games), I found myself questioning the validity and earnestness of the game’s message more than anything regarding war or morality. It’s edgy. But it’s not as if the intended message is a particularly profound one. I’m pretty sure that by now we all know that war, yeah, it’s real bad man. It makes people do some pretty crazy stuff. No new thematic ground is broken here.

READ ALSO:  Resonance Shall be My New Obsession

But what’s more damning are the limitations that participation imposes on conveying anti-war, anti-violence messaging in a video game. The medium itself forecloses on the creators’ authority to communicate the “war, yeah, it’s real bad man” message. You still get a friendly “ding” when you earn achievements and trophies for shooting people, and you’re rewarded with story progression for killing the bad guys. And of course there’s a full multiplayer suite that undoes any pretense or intention of not glorifying war and killing.

It’s hard to take the game seriously once you step back from some of its more effective moments, like the aftermath of a white phosphorous attack that should effectively end the “awesomeness” of impersonal slaughter-sequences like the ubiquitous AC130 gunship trope, and realize that it is just another middle-of-the-road shooter. This could have been a dramatically subversive, incredibly progressive game that puts the player in the physical and psychological aftermath of modern warfare and the mistakes that are often made in defense of freedom or other agendas masquerading as freedom. But it isn’t. It’s a mediocre action game that just happens to have had a better-than-average writing staff that thought they could elevate the subject matter to something closer to Coppola’s film or Conrad’s novel. But participation- the key differentiator in the spectatorship of games versus films or novels- undermines what they were trying to accomplish.

Regardless of the handful of binary moral decisions, bodies hanging from street lamps and the PTSD nightmare that closes the game, this is still one where a meter tracks your headshots and there’s plenty of cool, Michael Bay-class set-pieces and machismo on display. While some may walk away from this game haunted by some of the grisly imagery and questions of morality, I’m walking away from it haunted by the question if the medium of video games is incapable of effectively carrying messages about violence and war while rewarding players for playing along.

24 thoughts to “Spec Ops: The Line in Review”