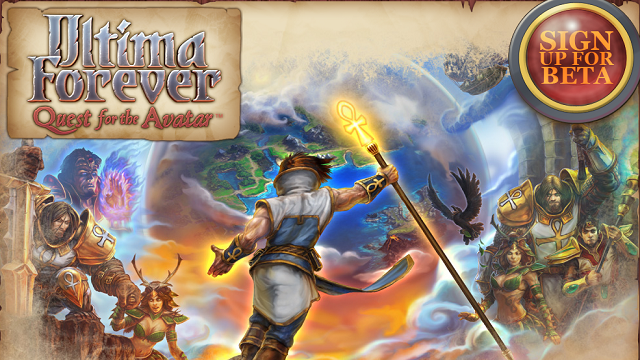 EDIT: I changed the title on this post after posting. Yes, I’m wholly dubious of the likelihood of this game appealing to me, but I’m sure there are some good people working on this project and they deserve to have it judged on what it actually is when it’s done.

Not to date myself, but I remember walking into the B. Dalton’s at the mall near my dad’s and seeing the Ultima IV box sitting on one of the shelves. Yes, B. Dalton’s once stocked video games. Yes, there used to be a chain of bookstores called B. Dalton’s. Yes, this will border on a “get offa my lawn” post. I loved the art on that box, by the way. Way cooler than the crowded image you see above. Sorry artist who drew that, I’m just a simple creature.

So… yeah. There it is. EA and Bioware/Mythic have announced a new, long-rumored Ultima title, Ultima Forever: Quest for the Avatar. (I see what you did there.) I’d say it’s something of a franchise reboot that begins with retelling Ultima 4: Quest of the Avatar, except it’s really probably not so much.

You see, I started playing games with the Sierra Quest stuff and Ultima. Ultima has been the single most influential gaming franchise in my life. I still have every boxed copy of the game from U4 to U9. I have the pewter ankh, the “silver” codex coin, the moonstone, and all the cloth maps. So, you’ll have to excuse me if I approach this one with a skeptical eye.

They’re saying it’s not an MMO, but it sure doesn’t sound single-player. It’s not a remake, but it is sort of telling Ultima 4’s story. It is free to play, but they’re really hoping you’ll spend money in the game. It will be available for PC and iPad. So there’s that. On the other hand, they’re talking about adventuring in parties of four and choosing only between mage and wizard character classes and using “action RPG” on the homepage and something about “Lady British” and then Todd’s head just sort of pops. Not even a pop with authority. More like the sound you can make yourself by putting your index finger against the inside of your cheek and snapping it back out again. It’s the sort of madness that makes me refer to myself in the third-person and not even care.

So here’s the thing, all snark aside, I’m willing to give this a fair shake. Ultima is about more than replicating everything that came before, but doing it with nicer graphics. You do have to build the game for modern audiences. I’m not a slave to the past. The past is still there and nothing takes that way. I’ve just never seen anything in the free to play medium that particularly interested me. I’m old school dammit. Take my money, without possibility of a return policy, and throw me to the wolves. If it’s good I’ll love you forever, or until you make something awful. If it’s awful, I probably won’t play your next game, even if it’s good. It’s all I know and this whole, well you can spend where you want, but we’re really not gonna bug you about it, we swear, model gives me the heebie-jeebies. And then you throw in this sort of cartoony Torchlight art, which is fine in Torchlight and all, but Ultima is for Very Serious People, and I just dunno.

In this interview with Massively, Bioware Creative Director Paul Barnett swears up and down that the game has the virtues, has the core story of the avatar, has Britannia and all its towns and loads of NPCs and the game will play to all Bioware’s strengths in story and character, although how strong Bioware still is in this regard is a bit dubious. They have… flashes, as we’ve recently discussed. But seriously, four player parties and two character classes? One of the great bits about Quest of the Avatar (seriously, making it “for the Avatar” bugs the ever loving shit out of me) is that there were eight cities, founded on eight virtues, defined by eight character classes, and you had to summon with you seven companions (plus yourself to make 8!) to embody the whole. Some of the promo art even shows the famous gypsy, but the whole point of that gypsy in those games was that she asked you questions that determined what your core virtue (philosophy) was and that determined what class you were placed into and which city you started in. The whole pieces of eight thing is pretty central, isn’t it?

Ultimately (bad, pun, BAD!), this game isn’t being sold to Ultima fans. We’re a tiny group anymore. We don’t matter. Seriously. We are irrelevent. But wouldn’t it be cool if this game were actually able to capture the spirit of those games in a way that crusty old players and modern players alike could delight in? Also, I think unicorns are nifty and I think the 113th congress will be a model of bipartisanship that brings us all together in universal harmony.

A guy can dream.

11 thoughts to “What to Make of Newly Announced Ultima Forever”