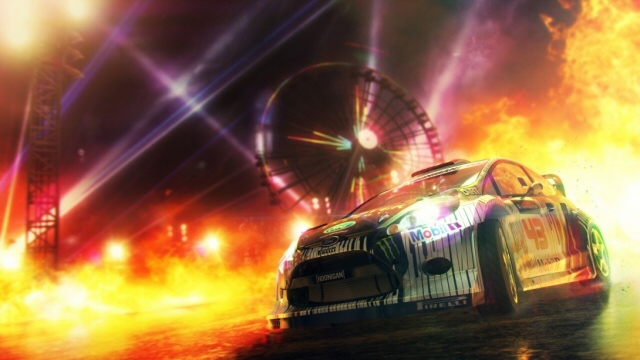 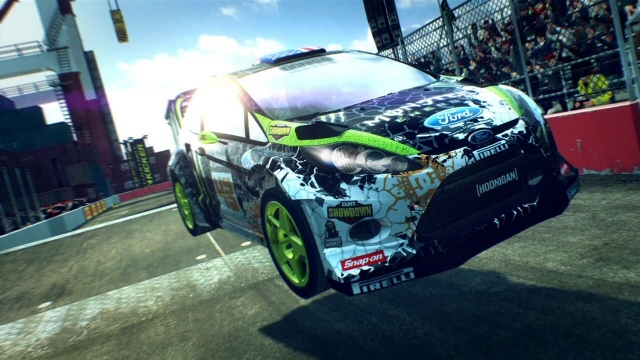 This is not what I expected. I’m not an expert on the DiRT series, but I do know that it is the descendent of Colin McRae Rally, that DiRT 3 made a big deal of proclaiming that “Rally is back,” and that dirt usually refers to an earthy material found to the side of paved streets. Silly me, thinking that DiRT Showdown might be an off-road racing game.

Traditional races involving laps and cornering skills are few and far between, and even those typically have hooks, such as the familiar Elimination mode. You can reasonably divide Showdown into three styles, each with its own set of vehicles; racing, demolition, and the technical maneuvers of gymkhana (eg performing hairpin drifts and 180s for points). Without a common theme, Showdown feels like a handful of prototypes polished to acceptable standards and lumped into a retail package. 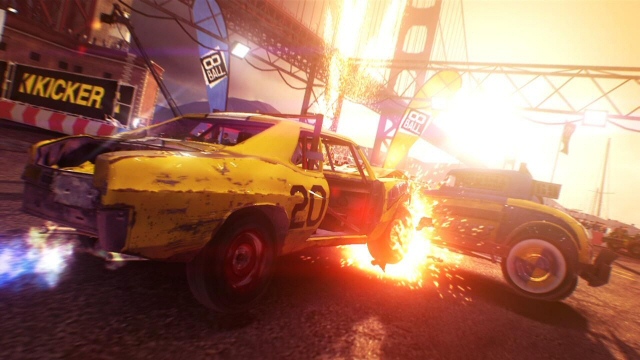 The menus are big and flashy, the soundtrack is studded with EDM stars, and the average event clocks in at less than two minutes. If you’re too busy bopping your head to the beat and being dazzled by the abundance of particle effects, maybe, just maybe, you might be too distracted to notice the lack of challenge or how useless the vehicle upgrades feel. I suppose it’s only appropriate that car customization is limited to pre-made liveries, and usually god-awfully tacky ones at that. Seriously, can’t I just paint my car blue?

Much of Showdown’s mechanics are poorly explained. Each event has its own set of rules that necessitates a brief, but still irksome, trip to the pause-screen. Even then, the actual rules for scoring (eg points for t-boning an opponent versus a head-on collision) are kept a mystery. It was only when I set out to write this review that I learned of the tuning options accessible in Advanced difficulty. Then again, the effectiveness of tuning is another topic for debate. 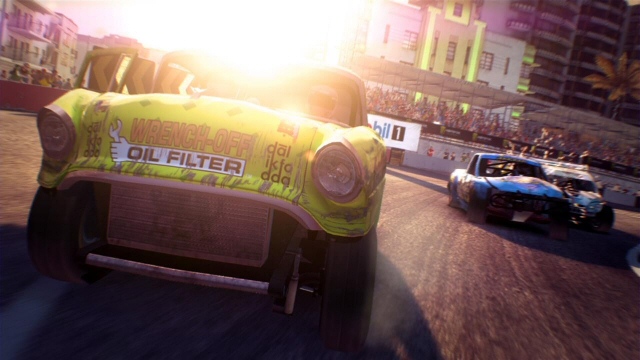 The physics of Showdown are weird. You can go from zero-to-drifting-donut around a pole in a marked section of a gymkhana event, while trying to drift in other sections usually sends you straight into the wall. Showdown’s guiding hand is so powerful that traditional emergency maneuvers – twisting the wheel to avoid a rollover, or a reverse-180 after being spun – end up being counter-productive.

Joyride was a hit in DiRT 3 and is sure to attract a following for Showdown. The two sandbox-style stages – an industrial complex and a shipping yard – each have maneuvers to perform and hidden packages to locate, but most people will probably get their kicks out of cruising around and coming up with their own challenges. I suppose this is the point where I might normally call Joyride a “selling point” or something like that, but two stages hardly constitute a new game, especially when one of them is a repeat.

Showdown lacks the punch of more focused racing titles. It has plenty of style, but unless you enjoy posting videos of your 360s and drifts on YouTube, there is very little substance. Like slapping a HFP body kit on a stock Civic, it looks sleek, but it won’t be crossing the finish line in first place.

3 thoughts to “DiRT Showdown in Review”