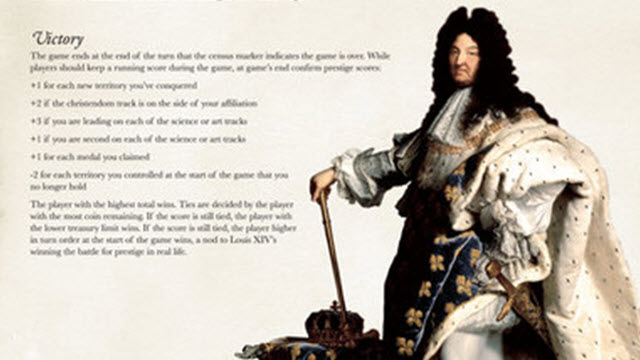 I’ve finally had to a chance to play Dirk Knemeyer’s Road to Enlightenment, and the good news is that all told it’s a pretty darn good game. It wouldn’t be proper for me to formally review it since Conquistador Games’ Director of Operations is none other than Bill Abner. You might could say that I’m in cahoots with him. He used to technically be my boss. There are all kinds of impropriety that would be bound up in my reviewing the game, which just shipped to Kickstarter bankrollers or whatever they’re called. I thought this game looked good enough to support, and the good news is that it’s not a disappointment.

But I am going to make an example out of the game to illustrate a larger point. Road to Enlightenment has one of the worst rulebooks I’ve read in recent memory. After reading through them one time, I had no idea what the core mechanic of the game was and it wasn’t even apparent that it was fundamentally a deckbuilding game. Basic game functions and processes were poorly explained to the point where it’s not clear how to play Vermeer, Newton, and Cromwell into one of the game-driving action stacks. Objectives were not clear. How to pay costs for cards wasn’t immediately evident and issues of timing were vague at best. Really important rules were crammed in an appendix of terms, stuck into call-out boxes, or hidden deep in paragraphs. Oh…so I can’t use the politics points on a Catholic card if I’m anti-Catholic? You mean there’s really not a turn marker, even though there’s a turn track or did I just miss something? Examples of play were sparse, and I came out of the rules scratching my head over them. Looking online for answers, I found rules questions and FAQs picking up the slack.

The trouble extended to actually playing the game with a table of five other seasoned game players. I had enough of an idea of how it would operate to get us going, but after literally going page by page through the rules and hitting the most significant points they all looked at me with that “what the hell are we supposed to do” thousand yard stare. That’s before they got dealt ten cards with a bunch of esoteric icons, numbers and text rules on them that they had never seen before. It was definitely a learning game to say the least, with questions and rules consultations at every turn foreclosing on anyone getting into the more interesting parts of the game. There are only about five pages of rules, which suggests both that there are about five too few. The game simply was not explained adequately by its rulebook.

Having read hundreds and hundreds of rulebooks in my time, I’ve seen more than a fair share of terribly written, formatted, organized, and explained rules. Road to Enlightenment isn’t nearly as bad as some of the rules I recall reading in the early 1990s, where designers and publishers seemed to be ephemerally suggesting how you should use the components in the box. It’s also a far cry from the confusing and complicated rulebooks that Nexus tucked into the first edition of War of the Ring and Marvel Heroes. It’s nowhere near the atrocity that was Return of the Heroes’ rulebook, presented as a conversation between characters. And we’re obviously not talking about an issue like with Magic Realm or Up Front, where it’s a very complex and detailed game that virtually requires you to learn how to play in stages.

But it is an example of why concise, clear, and well-organized writing is essential and why badly written rules are frustrating- especially when the design is good. When you’re writing a set of rules, you’re writing something that is going to be sent out into the wild and used to re-enact your game as it is intended to be played. More significantly, it is a document that game players are going to use to effectively complete the alchemical cycle of game creation by completing the design through play. With this in mind, there is no excuse for the rules to be the chief stumbling block or barrier to entry for players to experience the design. Card FAQs in a game like this should be expected, but FAQs practically required to comprehend the game at a basic level should not be.

You can’t assume anything about the reader. You have to understand that you’re giving the ingredients and the recipe for the cake but if it’s not clear if it calls for milk and pickles, then milk and pickles can and will find their way into what comes out of the oven. You’ve got respect the consumer and provide them with the best, most authoritative rules out of the box that they have purchased, not in an Internet fix-it-up file. By the time a table of six players plays the game and it bombs because of bad rules writing, it may be too late for the online FAQ. The rules are where players are introduced to a design and learn how to execute it, so don’t screw it up. That’s the TL;DR version and the moral of the story.

Like a lot of rules sets from first-time designers or smaller publishers, Road to Enlightenment feels like instructions that would make perfect, complete to sense to someone who has had the game explained to them or that has played it enough to fully comprehend its process and mechanics. But consumers purchasing this game are not those people, barring those who have had Mr. Knemeyer or our very own Bill Abner teach them how to play at the World Boardgaming Championship or elsewhere. This is why the rules FAQ is already available and growing, and it is something that could unfortunately jeopardize the success of the game in the marketplace as word gets around that the “rules are really bad”.

Getting the rules right- and I mean the writing part more than the design part- is obviously essential. But it’s also something that is a very tricky proposition that demands accessibility, proper formatting, examples, clarity, and completeness. Looking across the shelf at the rules writing at other companies provides some good examples. GMT’s often very complicated games have a uniformly impeccable, clean presentation using the traditional case-based numbering system that doesn’t necessarily make for good cover-to-cover reading, but the practicality of reference can’t be beat. And they usually include a more prose-oriented playbook with extended examples of play or a completely explained sample turn. All of the above can make their rules seem more difficult than they really are, so it’s sort of a trade-off.

Fantasy Flight Games used to have some of the worst rulebooks in the business. In recent years they’ve scaled back the text and improved their organization to the point where even their most complex games have concise rules, well-organized and thoroughly illustrated with an eye toward making it playable by someone who’s never picked up a hobby game before or a veteran. The problem with their rules is that they can’t seem to get QA issues and basic copyediting nailed down.

Mage Knight’s rules, although split between a play-through tutorial and a reference rulebook, serve the game well by making it actually quite easy to understand if you learn it as intended. I remember looking at the rules when I first got that game and thinking “oh no, this is going to be a burden”. But it wasn’t. Reading through the rules I was surprised at how well-written and executed they were, and how there was almost no confusion or vagary. The game needed this kind of entry point, and it contributed to my enjoyment of last year’s best release. If that game had a bad rulebook or if it weren’t so well-explained, I doubt it would have found the fanbase and acclaim that it has.

Road to Enlightenment presented me with a set of rules that gave me a feeling similar to what I get from reading a Phil Eklund game for the first time- complete confusion. But instead of feeling like the rules were over my head and rigorously academic, explaining a game with lots of very specific (and rationalized) detail, I felt like what should be a very easy game at a rules level was made much too difficult in the telling so to speak. Bad rules often portend bad things for a design, but there are also occasions when a little clean-up and some good old fashioned red pen editing are all that’s needed to tease out a great game buried beneath bad writing. A second edition rulebook- better written, better formatted, and better explained- is likely all Road to Enlightenment needs. Other games aren’t so lucky.