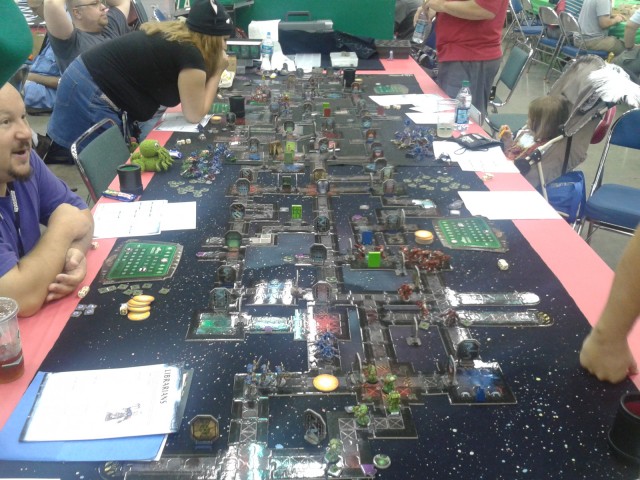 Everyone has different scenes, whether it’s a small gathering of friends, hanging at a coffee house with your laptop in tow, leeching free WiFi and enjoying overpriced and over-brewed Starbucks “coffee”. Perhaps you’re a gamer who loves a good LAN party? Perhaps you’re the gamer who parties on Friday and rolls D6s on Saturday? Whatever the case may be, we all have various scenes that we enjoy and scenes we don’t.

I enjoyed the scene at the WBC in Lancaster a few weeks ago. Sorta small, maybe 2,000 people, everyone mostly chilled out, there to play some games, see old friends, drink some beer and have fun. I’d bring a carload of buddies to WBC and we’d have a blast.

GenCon isn’t that. GenCon is the hobby’s version of E3: although not as big, not as glitzy, and with a lot more people dressed in costume and playing Magic: the Gathering. Of course unlike E3 the people in costume are getting PAID to do that. The people at Gencon do it because…OK I have to tell you I don’t have a freaking clue. We had 230 pound Wonder Woman. (Do not ask. My buddy Dan saw this and relayed the info to me.) We had cellulite Xena. (I saw this and truly, genuinely, wish I hadn’t.) We had a dude wearing a dark green velvet cape and a robin hood hat sporting a giant walking stick. There was the guy dressed in what looked like full on plate mail. There was another fellow who had on a fake Gandalf beard. That was it. I think he was wearing a Blue Oyster Cult T-shirt so it was a weird mix of ’70s rocker/stoner…with a fake beard. Didn’t get that look. Maybe he was being sarcastic gaming hipster? Finally, there was a guy dressed in what looked like Conan garb with very little covering his…stuff. Dude for the love of Crom put that shit away.

Now, don’t get me wrong: if you want to dress up at a con — godspeed; who am I to judge? Now, I personally wouldn’t flaunt my wares with a g-string if I hadn’t seen the opposite end of a sit-up in 20 years but to each their own. If you’re having a good time then that’s all that matters. My eyes will someday recover.

On the plus side, I saw an epic-sized game of Space Hulk being played.(Pictured)

The vendor area is a real mess. After a while every booth sort of blends in to each other and the only thing that really stands out is the ever present shadow of FFG — they are *everywhere* at GenCon. You can’t walk 20 feet on the floor without some sliver of it being devoted to FFG products. This is clearly “their show” and people flocked to its booth as Netrunner sold out in the time it takes to watch the opening credits for Big Bang Theory. The Star Wars: X-Wing Miniatures Game was being sold and Dan pointed out to me that you get a total of one X-Wing and two TIEs for like $45. My interest plummeted and he told me later he bought like two copies of the base game and an expansion. His willpower is legendary. The LINE to buy an FFG game was stunning. And wouldn’t you know it the only game I wanted to buy from FFG, Merchant of Venus, was on demo only. Not for sale. Great.

But unlike WBC, where open gaming is small enough to hear yourself think, a lot of the gaming/demo areas were LOUD, crowded and in no way conducive, for someone like me anyway, to playing games. Teaching Road to Enlightenment would have been next to impossible in the demo room.

In all, I’m glad I went. I bought a few games, made some contacts, met some very nice people (including Mike’s buddy Frank Branham who was demoing his new game Battle Beyond Space. (Barnes gives this an enthusiastic thumbs up btw.)

So I have been to GenCon. Next year I’ll likely be manning a booth so the experience will be decidedly different.