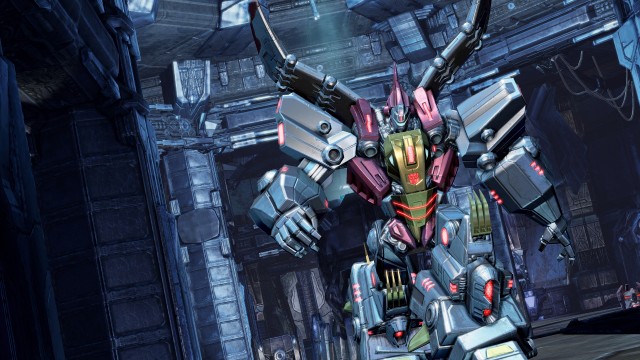 If I were having a conversation with my 10 year old self over why I feel somewhat let down by Transformers: Fall of Cybertron, I imagine it would be a somewhat awkward conversation.

“Do you get to be Optimus Prime?”

“Yeah, you get to be Optimus Prime.”

“THAT’S SO COOL. Do you get to be Megatron?”

“Yeah, you get to be Megatron. Bruticus, too.” 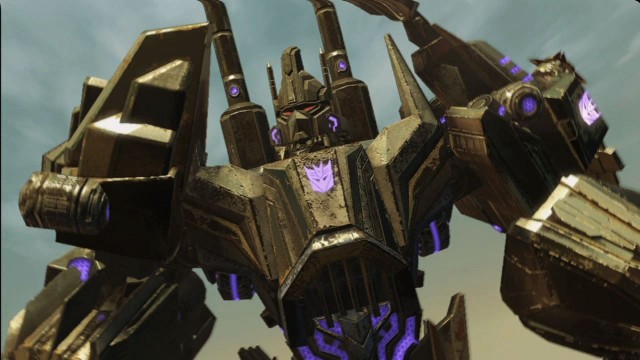 “He’s a big robot made from combining the five Combaticons.”

“THAT IS SO COOL. Can you transform any time you want?”

“Yeah, pretty much. Optimus is a truck thing, Jazz and Cliffjumper are race cars. Vortex is a chopper, Megatron is a tank.”

“I thought Megatron was a gun.”

In actuality, it’s not that complicated. Simply put, rather than try and craft meaningful narrative arc , High Moon instead chose to build a tale that’s really not much better than picking up an Optimus Prime figure and a Megatron figure, saying “I”m taking this arc!” “No you are not taking this arc!”, and then smashing them together and making ARRGGHHH noises. If that’s all you want from a Transformers game, Fall of Cybertron does an excellent job, and delivers a more focused effort than War for Cybertron.

Don’t get me wrong, there are plenty of things to like about the game. All of the various playable robots feel different and allow for different strategies for attacking the level. Jazz’s grapple hook let’s you bounce from ledge to ledge to line up that perfect shot. Megatron is all about brute force, with a devastating vehicle attack that allows him to pulverize waves of Autobots. Vortex and Starscream give plenty of opportunities for darting among the spires and peppering enemies with rockets and chaingun rounds. Grimlock and Bruticus are appropriately powerful, unleashing strings of melee attacks and shield bashes, carving a path of destruction across the landscape of Cyberton.

For most ‘bots, the ability to equip different primary and secondary weapons, either from purchasing them at Teletraan-1 “store” or finding them in ammo recreators, allows you to tailor your running and gunning however you see fit. I tended to stick with weapons that were appropriate for the character, but that’s just me. I’m sorry, but Megatron doesn’t have a sniper rifle on his arm, he has a cannon. The ammo recreators are a nice touch, allowing you to spend a little money to use a weapon until the end of the level, rather than having to wait until you find the blueprint and then pay to unlock it. Weapon upgrades are also welcome, rewarding players with pretty dang effective boomsticks should they decide to spend the coin. 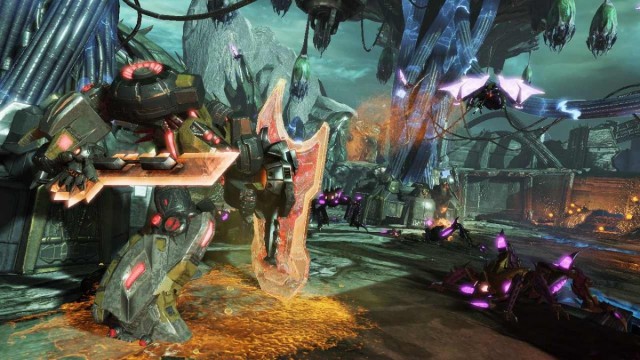 While I was initially disappointed in the removal of co-op from the game, upon playing it, I don’t miss it. High Moon may be good at building nice looking robots, but AI programming was not their strong suit and no co-op means no AI partners that don’t offer anything to the mix. Instead, through a nice mixture of level design and character switching, you get the feel of doing a mission with fellow ‘bots without having to worry about them getting stuck in a doorway. Jazz and Cliffjumper’s foray into one of Cybertron’s lost cities never feels like a solo affair, despite allowing you to play as one bot at a time. Similarly, the Combaticon’s mission to capture an Autobot transport ship feels like a mission undertaken by a team rather than five disparate characters. The final level is the best example of weaving together the actions of multiple bots, deftly switching from Autobot to Decepticon, and allowing the player to feel like they are part of a tremendous struggle, regardless of which side they’re on. It was easily the most thrilling level of the game and one of the best final levels I’ve played in recent memory.

So what’s the problem, then? For one, I’m not sure we need two games to tell the story of how the Autobots and Decepticons got off of Cybertron, especially seeing how the story here boils down to “Autobots fight Decepticons and then both factions leave.” Hardly thrilling stuff. Yes, there’s some stuff here that sets up how both sides get to Earth, and along with the main story there’s a side plot involving how Grimlock got turned into a Dinobot, but none of the various plot points come together in a satisfying whole. Megatron doesn’t seem particularly villainous, seemingly opposed to the Autobot’s retreat simply because they didn’t ask permission. Pissy, sure, but far from what I’d call evil. 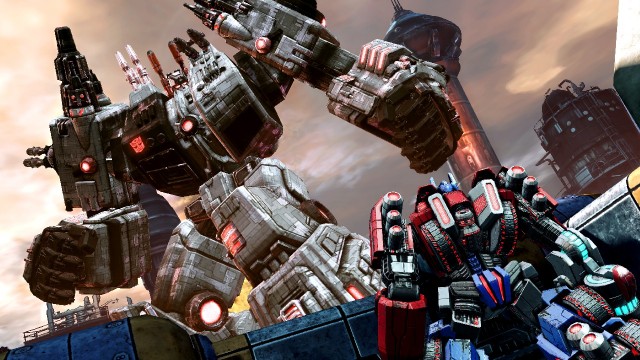 Second, the story is more a collection of character-based levels than a cohesive narrative. Worse, the characters don’t show any growth or movement. It’s like when you were a kid and you bought a Transformer and you read the back of the card and went, ok, Cliffjumper is brash and impulsive (two attributes that don’t exactly jive well with his cloaking special power, but whatever), got it. Every time you played with Cliffjumper, he would be brash and impulsive because you were a kid and that’s what you read and kids aren’t known for their need to craft satisfying character arcs. The problem is that the other mediums that the Transformers have been portrayed in, comics, various tv series, have taken the time to craft those arcs. So when I play a game that has Noble Optimus Prime and Cowardly Starscream and Brave Bumblebee, I feel like it’s not only a step backwards but a missed opportunity.

Don’t get me wrong, I know how this sounds. Nitpicking the story in a video game about a line of robots that only exist because Hasbro and Takara wanted to sell some toys is silly. I get it. Honestly, I’ve had a hard time parsing what about the game felt lacking to me, and I am worried that my issues with the game will obscure the fact that it’s a well paced, well implemented, very good looking and technically sound third person shooter. In the end though, I gotta be me and I’m a dude with an Autobot tattoo and several rooms full of transforming toys. I take this shit seriously.

For those not irked by the fact that Optimus calls Metroplex “old friend” only five hours after finding that Metroplex existed in the first place (I’m sorry, I’ll stop), there’s plenty of multiplayer madness to take part in once you’ve battled your way through the campaign. The class based multiplayer is largely untouched from the previous game, save for the removal of vehicle special abilities, the upping of earned experience for certain tasks and an extensive suite of customization options, most of which are earned through in game currency some of which are earned with old fashioned, real world currency. The customization looks interesting from the outset, but when you start to get into it, it’s not as cool as it would appear. Sure, putting a Shockwave head on your tank dude’s body is good for a hoot, but Shockwave’s head is the most distinctive part of him. Now your tank guy looks like a roided up Shockwave. 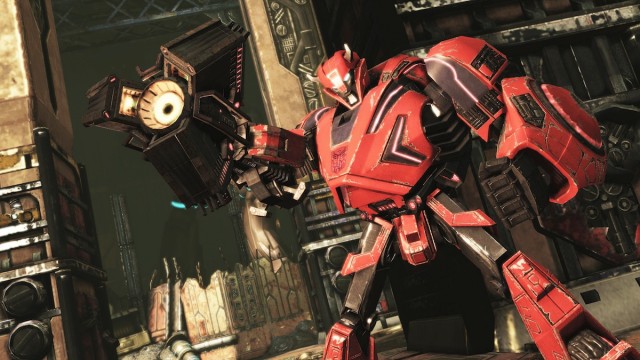 Escalation gets the most changes with the ability to set a starting difficulty level, three chances to get through the fifteen levels and a class based system of character options. The class system is a nice way to let players avoid spending money for heals and ammo, but it all but insures that you’re not going to get very far going it alone. Eventually you’re going to run out of ammo or health and killing guys only nets you so much. Horde mode is always better when played with other people, but the addition of classes makes utilizing a sound strategy a must and sound strategies and random Xbox Live players go together like Dinobots and Insecticons. In other words, get three other friends or hope for the best.

I hope that the game does well enough for Activision to commission another one, and that High Moon can find some creative freedom now that the shackles holding them to Cybertron have been broken. Sure, Hasbro will always have a hand in directing what the Autobots and Decepticons can get mixed up in, but maybe the ability to tell a story that is completely new to the Transformers mythos will be the creative allspark needed to allow High Moon to craft a game that holds up to the imagination of fans new to the franchise and those who can devote entire shelves to the various incarnations of one character.

14 thoughts to “Transformers: Fall of Cybertron in Review”