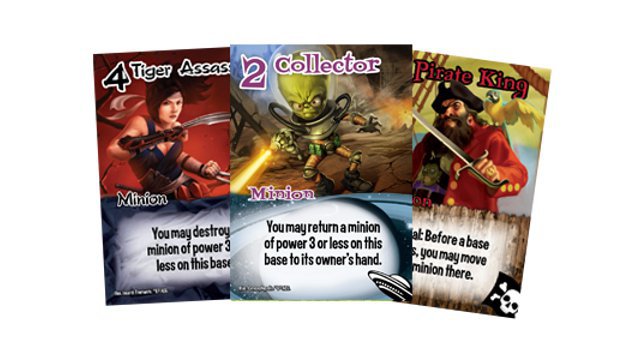 I have an inherent- and frankly personal- issue with Paul Peterson’s Smash Up, a new card game hot off the AEG presses. I despise the prevailing nerd humor idiom in which combining two “cool” things yields some supposedly funny juxtaposition. Smashing up Cthulhu with McDonald’s or Hello Kitty yields a bumper sticker with McCthulhu’s and Hello Cthulhu. They make T-shirts combining Doctor Who and Star Wars to make geeks giggle. Go to any given convention and you’ll see this kind of comedy, whether it’s something about ninja monkeys or- possibly the worst- Killer Bunnies in all of their dreadful, accursed variants.

Smash Up is more or less based either on this concept or at a very high level the power/race combining in Small World. Its “shufflebuilding” mechanic invites players to experience the would-be hilarity and mayhem precipitated by combining pirates and zombies or robots and dinosaurs. Players get to choose two from a menu of eight factions to build a forty card deck, and of course each has a particular flavor. The Ninjas have some stealthy, surprise tactics. Wizards have cards that increase their actions. Robots are plentiful. And the Dinosaurs have lasers. I won’t lower myself to dub them “friggin’”.

Like so many comedy card games, Smash Up isn’t funny if you’re over 15 or if you’ve got a bad sense of humor and have played the game more than once. Whether or not the game delivers on its promise of “total awesomeness” is up to you, but the good news is that it’s actually a pretty decent, simple card game where the players and gameplay provide the fun and the funny, even when the hardy-har-har novelty of Pirates in league with Dinosaurs wears off. Which for me, was a threshold of about a nanosecond.

It’s an abstracted area control game descended from Reiner Knizia’s Schotten-Totten, wherein players assign cards to contest control of base cards, which provide VPs and possible special actions to the players with the highest total card value. There’s a whiff of Blackjack as well, with the base cards featuring a breakpoint. Once the total value of cards played breaks it, the card is scored and points are assigned. Figuring out when to make a play and bust a breakpoint can lead to some interesting decision points.

But this isn’t really a game about decision points. It’s about playing cards- in both Minion and Action flavors- to screw with other players, kill their Robots and Aliens, and get yourself into advantageous positions. It’s smooth playing and simple, with players playing one minion and one action each turn and then drawing two. Card/rule conflicts are minimal, and with four players it’s a rambunctious 30 minutes that’s fun, light, and silly. It ain’t another King of Tokyo, but the tone and spirit are similar. There’s an IOS version in the works, but this is one where you really need eye contact and a table of rowdy friends. It plays four, and you should probably only play it with four.

There’s a lot to like about Smash Up, even if the comedy is DOA. It’s great for casual, off-the-cuff play, and it’s the kind of game you can have up and running within 10 minutes of breaking the shrink. The rulebook is outstanding- absolutely no BS, brief, and written with a modern tone. It’s just about as far away from a Don Greenwood rulebook as possible. With expansions on the way, the right kind of accessible gameplay, and humor that I just don’t get, this one could be a hit with the crowd that buys most of their games at the comics shop. In other words, it could be another Munchkin. Or Killer Bunnies.

One thought to “Cracked LCD- Smash Up in Review”