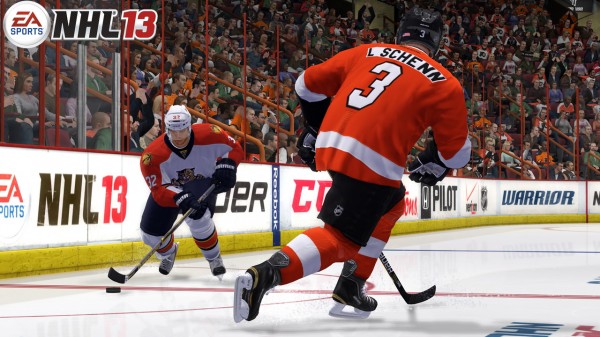 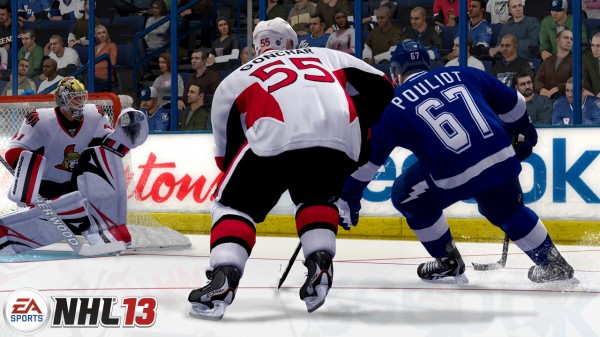 You have heard this all before.

“We rebuilt everything from the ground up!”

It’s the most common mantra when it comes to yearly sports games. Well, that and “we have added thousands of new animations!” which very well might be true but when in fact you may end up actually noticing maybe a dozen or so.

It’s the nature of the 12 month release cycle beast. You need a new hook to get both old and new players interested in what is essentially the same game you played or are still playing from last year.

NHL 13 is no different, really. In this case, however, the hook works.

If you’re a casual player of this franchise, many of the gameplay changes won’t smack you across the chops. However, more ardent fans of NHL will most certainly not only see but perhaps even struggle to get accustomed to the new skating model, which EA is dubbing as “True Performance Skating”. In this case, the “new from the ground up” thing may actually be true.

This is by far the most immediately significant change since EA added the right thumb skill stick. Skating is now physics based. This is according to EA; I have no idea if it’s true or not. I do know that some of the tricks you used to pull in NHL12 will not work anymore because the skating is so very different.

Zipping down the ice at full speed only to stop on a dime and deke the goalie?

Changing direction like an NBA point guard? Making tight turns without losing any speed? Making a perfect pass into the slot at full speed? Not unless you’re a puck magician.

This may sound like just a neat feature but in truth it’s a staggeringly important one. Getting the skating model down is a baseline feature that needs to be good otherwise you simply have an arcade hockey game not grounded in some sort of reality. The kicker is that it’s not until you play NHL 13 and then go back to NHL 12 that you see just how wildly different it is both in theory and in practice. The new model affects fatigue, shooting, penalties – basically the entire game because skating is the foundation of the sport. It especially changes defensive philosophy because freelancing is now a VERY dangerous tactic. Being forced to play positional hockey in a videogame is a first.

It’s not perfect – you’ll still see too many puck handling miracles from time to time and I swear there are times when I can feel that a CPU goal is coming minutes before it happens regardless of what I do. I have no way to prove this, but the AI build up is unmistakeable. The simple fact is that NHL 13’s gameplay does take the franchise up a notch, and this is a franchise that ever since it introduced the right stick shooting mechanic has been top of its class, crushing 2K to the point of submission.

You are still going to need to tinker with the gameplay sliders a bit – particularly the passing and receive sliders because tape to tape passing is alive and well in NHL 13, which is a shame, but at least you can mess with the settings to get a little less predictability. Still, no sports game makes you tightly grip your gamepad, use body-English or give an exasperated sigh when the opposing goalie makes another wicked save than the NHL franchise. It has a real penchant for causing some high stress moments – particularly when playing against a buddy in the same room.

There are two new modes: one is NHL Moments Live, which lets you recreate classic NHL moments to see if you can change history. I find these types of modes in sports games fabulous wastes of time.

GM Connected mode allows up to 750 players to play in a worldwide league – 750. There was a time when something like this would have made me pass out from the possibilities of playing in such a format, but fact is, I don’t have time for modes like this anymore. I fiddled with it and it’s clearly full of unlimited potential for a hockey geek, but I find myself continually going back to Ultimate Hockey Team.

For whatever reason, the card collecting mini game (something I usually hate in a videogame) totally clicks with me in NHL. It lets me sit down and play a few games, buy some new cards, and go about my day. That’s about all I have time for these days and HUT is a perfect way for me to play and the new interface changes to it are a welcome addition.

It is getting more difficult each season for EA to convince people to pony up $60 for a new sports game but when you consider the fundamental changes that NHL13 has added, going back to NHL 12 isn’t an option–and making the old version obsolete is about all you can ask for in a yearly update.