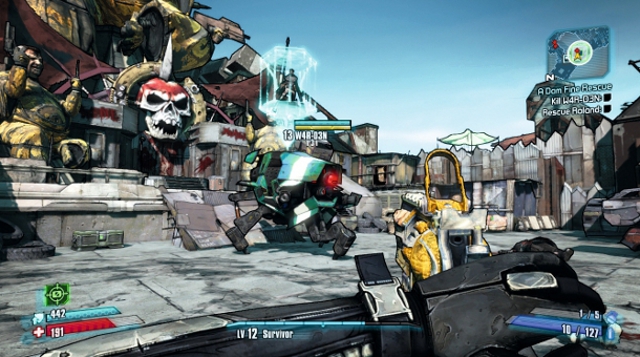 For a game that was one of my most anticipated of the year, I haven’t played Borderlands 2 for nearly as much as I would have liked. Alas, just as I got started getting into it, something else for review dropped into my lap and I had to devote some time to it. Such is the way of a game reviewer, you go where the money takes you. Wait, we’re not getting paid for this?

Get my agent on the phone! 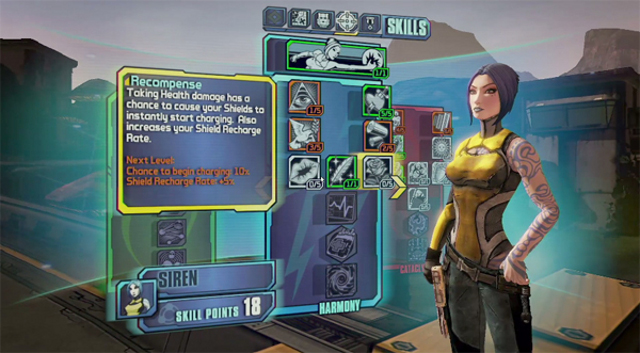 I played through all of Borderlands and all of the Borderlands DLC as a siren, switching over to other characters only long enough to get their respective achievements. I don’t know why I picked her in the first place, but being a female redhead with psychic powers and a propensity for SMGs certainly didn’t hurt. I mean, she’s Commander Shepard, just on Pandora. In practice, my use of the Lilith’s powers were, shall we say, less than effective. Oh sure, I killed plenty of dudes, but more often than not, I’d leave myself behind enemy lines with no way to pop off my power, instead having to shoot my way back to the safety of my co-op partner. This time around, Maya’s power, the phaselock, can be used on an enemy without exposing yourself to any more enemy fire than when shooting them normally. Not only that, but the various bonuses that can be built upon the ability (healing orbs, elemental damage, sucking in other enemies) makes it a powerful crowd control tool as well as a more easily planned tactical tool. It’s also a lot more effective when I don’t have a co-op partner to run back to, a situation I will no doubt find myself in as my time with the game progresses.

While I appreciated the weapon proficiency stats from the original game, as you got deep into the higher levels, those weapon skills felt more like a limitation than a boon. If you found a really awesome assault rifle, how did it compare to your SMG, knowing that your SMG proficiency was much, much higher? Those proficiencies are gone in Borderlands 2, so you’re free to use whatever weapon you want, or whatever weapon best fits the situation at hand. There still are some character specific weapon skills, Zer0’s sniper rifle skills for example, but for the most part, if you just picked up an awesome new shotgun and you want to use it, go on with your bad self. Give them psychos what for. 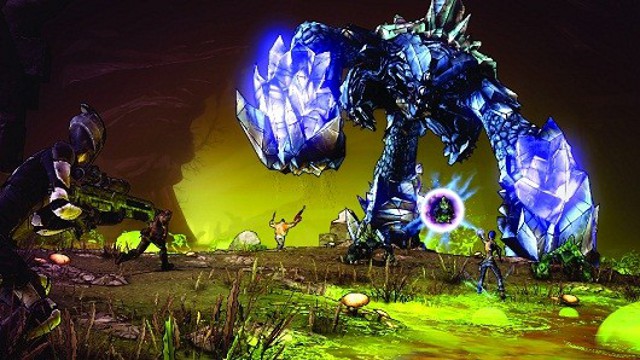 Weapon proficiencies have been replaced with badass points earned by completing skill challenges. I love, love, love games that reward you for not just playing, but for playing around. Look, I’m going to get the challenges for killing bad guys with SMGs and using phaselock and probably setting dudes on fire, as I gravitate towards weapons with fire damage. Tell me that I can get points for killing guys with sniper rifles or barrels, or melee attack or a bunch of other weapons and environmental items that I may not have looked at before, and I’ll try them too. Maybe I’ll find something I like that I wouldn’t have noticed before. Frost that cake of experimentation with a tasty buttercream of attribute progression and I’m one happy camper. Having these skills go up a percentage point, or half of one, at a time isn’t going to let you wade through crowds of higher level monsters with impunity, but when I start up another class from scratch, I’m sure I’ll appreciate the little bumps in skill. I also like the fact that you can turn said bumps off if you so desire. Not sure why you’d want to do that, but it’s your game, do whatever makes you happy.

I’ve only heard his voice over the radio, and seen him him in the opening movie, but I already like Handsome Jack more than any enemy encountered in the original game. Granted, I couldn’t tell you who the main enemy was in the original game, but that’s beside the point. Jack gives you someone to focus your ire on, and his taunting words drives you forward through the main quest. Jack and I also share an affinity for gem encrusted ponies, so there’s that too. 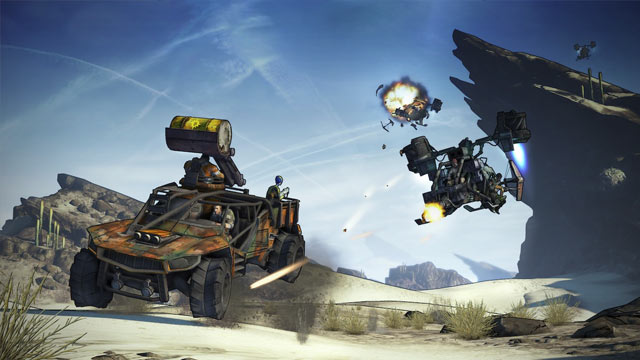 Maybe this stuff was in the last game, but there seems to be a lot more in the way of inventory management this time around. Trading weapons with co-op partners is no longer an exercise in vomiting up your gear and making your partners stare at the ground for ten minutes. You can go into a trade screen and trade weapons for weapons or weapons for money or whatever. Granted, true co-op partners give away guns, they don’t sell them, but if you want to merc your friends over a corrosive sniper rifle, I guess that’s your business. Being able to stash unwanted weapons away for other characters is also a welcome addition. Lord knows you’ll need it.

Look, I get that you’re not going to give a level one character a rocket launcher that shoots acid-spewing kittens, but for the love of Roland, can I please find something other than a pistol? Here a pistol, there a pistol, everywhere a pistol, pistol. Seriously, it’s getting pretty old. I’m not looking for pearlescent weapons at this point, but seeing how the bandits I’m killing are armed with weapons that are far, far more powerful than my cruddy little popguns, it’s not entirely out of the question to ask for an assault rifle or an SMG. I’m hoping that once I get to Sanctuary, the loot river will begin flowing because if not, Mama’s gonna be unhappy. And when Mama’s unhappy, ain’t nobody happy. 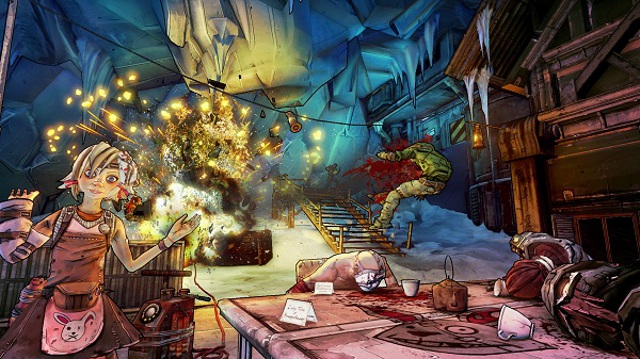 Borderlands 2 quests can be long, both in time spent and distance traveled. If you need to quit your game prior to completing the quest, when you come back you’ll be at the entrance of the last level you entered and you’ll have to do everything all over again. “But”, you say, “who cares, when more fighting means more loot and more experience?” That’s true, but if in attempting the quest and failing, you go up a level or two, the experience gained by killing dudes all over again is downright piddly. The weapons probably won’t be that much better either, not to mention the money spent on ammo used to kill people you’ve already killed. I know that this was also the case in Borderlands, but these quests seem longer and tougher, especially solo, so it’s more of an issue this time around than the last time. Note, this does not include if you complete the quest but just haven’t turned it in. This is only if you haven’t completed the quest objective.

I know that this isn’t the game’s fault, but when you consider how much time I spent playing Borderlands, including all of the DLC, I spent much more time as an unstoppable killing machine than as a gun fumbling newbie. When you burst into flame upon killing someone, can run like a jackrabbit, do increased damage, have increased reload speed and increased weapon speed, that’s a hard thing to give up. It certainly doesn’t help that those abilities fueled a lot of my behaviors, behaviors I have retained for Borderlands 2 only without the abilities to support them. I know that this isn’t the game’s fault, but hot damn, it is taking some serious getting used to. I used to be Death, destroyer of worlds and now I’m a lady with a disco ball. No wonder the enemies all run right at me. I can’t hit the broad side of a barn. 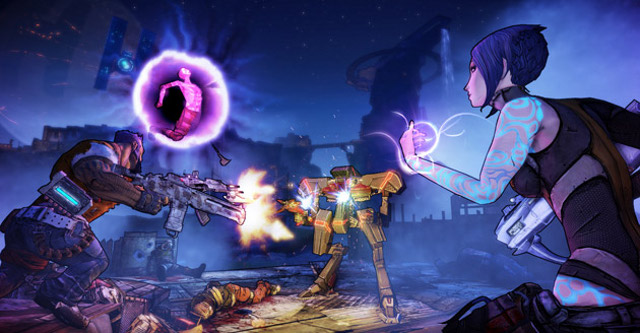 I’m looking forward to spending some time with the game when I can sit down and really dig into things. Hopefully that will be tonight. My overall impressions of the game are positive, despite my complaints and I think that spending more time with the game, especially in co-op, will go a long way towards addressing my issues. Before I know it, I’ll be back to tearing up the battlefield and playing a chorus of destruction on the strings of my SMG, or shotgun, or assault rifle. You know, whatever works.

14 thoughts to “The Good and Bad of Borderlands 2”