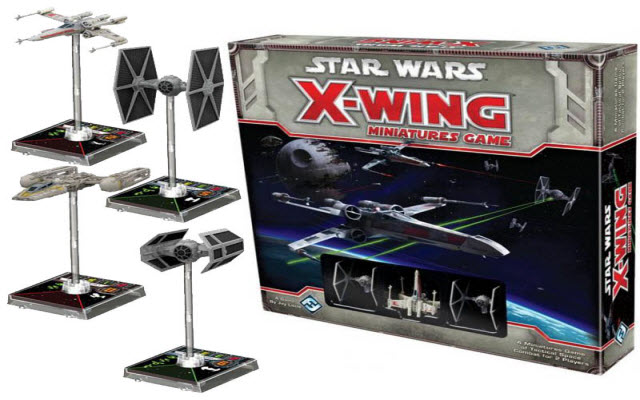 The highest praise that I can give to Fantasy Flight Games’ new X-Wing miniatures game is that it makes Star Wars awesome again. It sloughs off decades of garbage with the Star Wars brand slapped on it. This is a game where Jar-Jar Binks never existed and the Clone Wars are just a cryptic reference. X-Wing, as the title suggests, gets back specifically to the really awesome faux-World War II fighter jockey stuff that I particularly loved when I was a kid. It is the spaceship dogfight game that I have wanted my whole life, writ in a modern, masterfully streamlined set of rules that all but step politely out of the way of the fun and cinematic action.

It is not a Wings of War ripoff. It uses some of the great design from that game along with ideas from the old Crimson Skies game, an obscure Euro called Techno Witches, and other games in its genre as a jump-off point to arrive at one of the least fussy, least messy tabletop miniatures games that I’ve ever played. The commitment level is low, requiring no paint, no assembly, and only a couple of ships to get going. Anyone can jump right in and pilot a flight of TIEs, barrel-rolling and blasting through asteroid fields and trying to get an angle on an enemy Y-Wing.

Any reviewer of X-Wing that attempts to rewrite the rulebook to explain the game is missing the point. This isn’t a game about which rules simulate which aspects of a subject matter that is essentially farcical to begin with. It’s not about how accurately it models or represents anything, and it’s not about the kinds of minutiae and millimeters that bog down other miniatures games. It’s a game about feeling. As soft-headed as that may sound, what works about this game above all else is how it feels to play- and how it captures the essence of the timeless, Manichean duel between X-Wing and TIE fighter, Rebel and Empire.

You don’t get to premeasure your programmed, dial-selected movement, so the maneuver you pick may cause you to bank right into an asteroid or wind up going over or under another craft in a very subtle abstraction of 3D space. There is a sense of movement and momentum. You have to be able to anticipate, know your ship’s limitations, and know when to risk making a difficult maneuver that incurs a stress token, thereby cancelling your ability to do a barrel roll or acquire a target lock-on for that turn until you recover. You’ve got to use the Force.

Combat is a straight-up shoot-out. I love a contested die roll. Red attack number indicates how many dice you throw, green is what the defender rolls. In one roll you’ve got concussion missiles streaming toward a target while it desperately tries to evade. Pick a focus action for the round and you can use the special eye icon as an extra hit or evasion. If a hit is scored, either shields are reduced or the damaged ship takes a card to count against its hull. Critical hits require that the damage card be played face-up, providing a sense of narrative told by ammo explosions, blinded pilots, or other impairments.

As in most miniatures games, building a force is part of the game. It’s point-based, with 100 point games representing a tournament-class battle. By using a system that puts the pilots and ship stats on cards and identifying tokens separate from the miniatures, each miniatures can represent anything from a Rookie X-wing jock to Wedge Antilles. Ships can also take on secondary weapons and skill cards including proton torpedoes, droids, and special tactics that modify actions or provide unique abilities.

The miniatures are awesome. One of the important things about this game to me is that it crosses that gap between game and toy and speaks to that part of me that still wants to play with toy X-Wings and TIE fighters. The implementation across the board is fantastic, with ship-specific dials for selecting movement and standardized information presentation throughout the game. The rules take about five minutes to explain to a new player before a first game and they’re memorized by the second. One odd component note- there are no pictures of any characters in the game barring one close-up of Darth Vader. FFG’s licensing arrangement with Lucasfilm may not allow them to show Biggs, Luke, and other characters, but at least it’s an opportunity for the publisher to showcase some exciting, all-new Star Wars artwork that’s exclusive to the game. No movie stills, not really a problem.

There is, unfortunately, a two ton Hutt in the room and that is the cost of the game. The core set ships with two TIEs, an X-Wing and all of the maneuver templates, dice, and markers you need and it retails at $40. I think this is a ludicrous price point for a starter, especially since it doesn’t even contain a paper map to use as a play surface. Online it can be had for $25, which is much more reasonable but it makes me question whether or not FFG is setting its retail prices intentionally higher than they should be to accommodate the deep discounters. Expansion ships retail at $15 each and come with a dial, tokens, pilot cards, and a base. These can be had for $10 online.

The game is completely playable for two out of a core set, but anyone that gets into the game should expect to immediately want to spend $100 or more on expansion ships or additional core sets. This isn’t entirely out of line with common market prices for miniatures games- but there is definitely a sense of sticker shock in the board gaming community. With more ships already inbound including the first medium-sized ones, this is a game where the sky is the limit as to how much you can spend on it.

But it’s also one where the sky’s the limit on where it can go. Scenario design, further development, fan add-ons, and competitive play are going to happen and are happening right now. It has the makings of a blockbuster, and between the FFG and Star Wars brands it’s definitely finding a player base regardless of the price. This is a Cadillac game and you can really get what you pay for out of it. I can attest that I’ve already played it more than any other game I’ve purchased this year, and I’m already certain that it will be played frequently on my tables for some time to come.