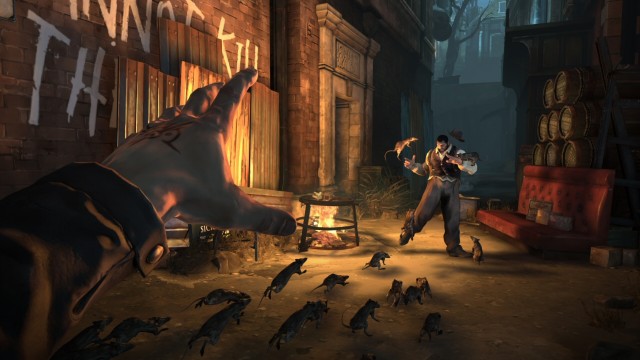 If you’re like anything like I am, with each passing year you think “it sure would be nice if someone would develop adventure-based FPS games again like they did in the late 1990s and early 2000s.” I’m thinking great games like Thief, System Shock 2, and No One Lives Forever- classic titles that were much more than just rote shooters despite the behind-the-eyes perspective. These were games that had a sense of focused narrative occurring in meticulous, handcrafted settings paired with a great deal of player agency, allowing for a specific story to be told with the detail filled in by core gameplay. Games like this are rare, but when we get a really great one it turns out to be a Bioshock. Or even a Metro 2033.

With this is in mind and with only a couple of hours of play to back up my claim, I’m already prepared to induct Dishonored into this esteemed fraternity of Really Great Narrative FPS Games.

It’s been quite a while since I’ve played a big budget, high profile game that really floored me and made me feel like I was playing the next great video game. The long spring and summer drought this year very nearly broke my spirit. I was beginning to think this generation didn’t have another truly great game left in it, especially not one with a new IP and without a 3 or a 4 appended to the title.

But from the very beginning of Dishonored, which sets up a simple plot without Michael Bay-class cutscenes, QTEs, or a bunch of bombastic AAA hullaballoo, I could feel that not-familiar-enough feeling of falling in love with a game and in particular its visuals, informed largely by a painterly illustration style evocative of artists like Maxfield Parrish. Then there are the slightly grotesque, almost caricature-like faces that evoke European comic artists. And there are moments both grand and subtle even in the first 20 minutes of the game that develop Dunwall as a new game setting to be reckoned with- the sad majesty of a whale suspended in one of this world’s whaling vessels, the bits of ephemera scattered across a desk. The blubberpunk (don’t call it steampunk, please) fashion and architecture of an impossible world.

As for the gameplay, I was shocked that there weren’t the usual array of gauges and visual indicators that most stealth games depend on. At least for the first couple of segments of the game, which include a great prison breakout, you’ve got to rely on instinct and observation to stay unnoticed rather than on line of sight cones, super-camouflage, or a magic color-changing gem. It’s only later on that you unlock a power that gives you some of these observational abilities.

I made it out of the jail without killing anybody. There were moments of great tension, of feeling like a total badass because I dipped between columns right under the noses of two guards. A couple of times I failed and wound up in combat, which is pretty tough on the Hard setting. Checkpoints are generous. The game wants you to try different things to see what works, it doesn’t want you to get frustrated by experimentation.

There were some clever moments as well, like throwing a dead body to lure rats away from a door-controlling crank. There was a blast of excitement as I blew open the doors, alerted the guards, and made a break for the sewers. I wound up escorted by a boatman to a pub run by loyalists opposed to the attempted coup d’etat that sets the story into motion. There I met the game’s crafter, who made me that wicked metal skull mask and sold me some sleep bolts for the crossbow. I’m playing nonlethal as far as I can.

Then, sleep. In dreams I meet the Outsider, who gives me the Blink ability, a short range teleport that is a master assassin’s dream. He also gives me a magic heart, that whispers secrets and beats feverishly in the presence of upgrade-granting runes. In the real world, it’s 4am and I’ve really got to go to bed. But I haven’t even thrown rats at anybody yet!

I can’t wait to play this game again tonight, and even though I hear that it’s short I think it’s a game that I can imagine revisiting on the hardest difficulty. It’s such a confident, assured design that pretty much says “fuck you” to many of the things the second half of this console generation has done so wrong. There is no bullshit multiplayer with multiple Corvos running around trying to headshot each other with a crossbow. There is no bullshit co-op, where Corvo’s bro has to be boosted up to a fire escape or revived when he’s down. There is just you, this rich setting, this brilliant art design, and this devotion to classic gameplay. No blubber. This is a focused game that does something very specific and it doesn’t burden you down with silly filler or needless bulletpoints to appease stakeholders.

Most importantly, these guys knew better than to just mimic the successes of Call of Duty, Gears of War, and other AAA titans. They drank from a deeper, older well of inspiration. We are blessed that they chose to do so.

Fingers crossed that the remainder is as awesome as the first night.