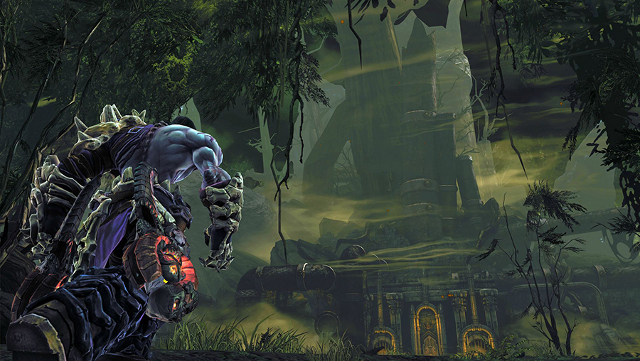 I was going to write a normal review for the Abyssal Forge, the latest piece of Darksiders II DLC and the first piece of DLC released under the season pass banner, but then I couldn’t figure out how I was going to take my criticisms of the last DLC and rephrase them for this DLC. I mean, sure, I could have done that, but I simply don’t want to. Plus, I don’t see that being particularly interesting for any parties involved.

If you want an extra hour, maybe hour and a half, in the world of Darksiders II and don’t mind that the enemies are all reskinned versions of stuff you fought in main game, by all means, download it and enjoy it. Sure, there’s new loot and if you’re not up to level 30 yet, I’m sure the experience points will come in handy. For me, though, there’s no reason to play this DLC, and, I’m guessing, the next piece. The carrot that the game dangled in front of my face for so long is gone and with no new carrot, there’s no reason to play, not when there are so many games currently filling up my backlog. I was willing to let the lack of any real challenge and lack of additional achievements go for the first DLC, in the hopes that these things would be offered in subsequent packs, but not so for this one. I’m not saying that there isn’t worth in playing the DLC just for the joy of exploring more dungeons, but for my Death, the only way I’d get a challenge would be to equip myself with crappy weapons and if I have to make my character less badass to enjoy your DLC, any interest evaporates quickly. Oh, and that level cap raise that was promised when the season pass was first announced? Yeah, nowhere to be found. Whether that’s a result of a dropped feature or a bug, I have no idea.

Like I mentioned before, if an hour in another dungeon interests you, then have at it. Me, I have so may new gaming experiences just waiting to be discovered, that my game time, both for fun and for review, is better spent elsewhere.

One thought to “Darksiders 2: The Abyssal Forge Mini-Review”