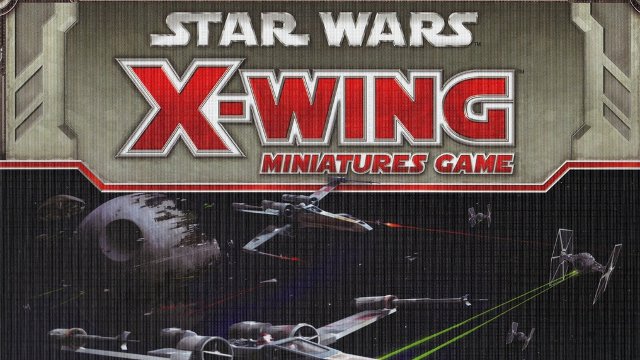 It is Christmas day, 1980, and I am six years old. I go running through the house, rich with the smells of festive cooking, past beaming adults, trailing behind me a full stocking, to sit on my Gran’s bed and open my presents. Tearing feverishly at the brightly coloured paper, I hope against hope that my hearts desire is nestled inside. And it is: Luke, Han and Leia come tumbling out onto the duvet in all their plastic glory and I am filled with the glee that only a child on Christmas morning can know.

In years since I have lost interest in Star Wars. Long before the prequels, without fanfare or particular reason I simply started to find Tolkien and Star Trek more interesting. As an adult, I left behind my childish things. Even the nostalgia worn thin: when I sat and watched A New Hope with my daughter recently, I consumed it like any other fun family action film. But when I opened a box and found the detailed, hand painted X-Wing miniatures inside for one moment, one brief flicker in time, I was back on that bed again, surrounded by the garish confetti of Christmas paper, trying to still my beating heart.

For some of you, that will be a siren call. If it is, you should stop reading, now, and go to buy this game. Those that remain will probably want to know a bit about the mechanics. It uses a points based system to allow each side to select a variety of starfighters and upgrades for them, and pilots picked from a roster of children’s dreams to fly them. Biggs Darklighter and Luke Skywalker in the base game. Wedge Antilles and Darth Vader amongst the expansions.

Each craft has a unique maneuver dial allowing the player to secretly pick a movement path, and once everyone has chosen these are revealed and the ships moved. Each fighter gets to pick an action from a roster individual to the type and then those in range and firing arc can attack. You roll attack dice and defence dice based on the ships stat line then compare hit results against evade results to see how much damage is inflicted. There’s a deck of damage cards, and critical hits provide unique disabling effects. Accumulate too much damage and a ship is destroyed. Last man standing wins. 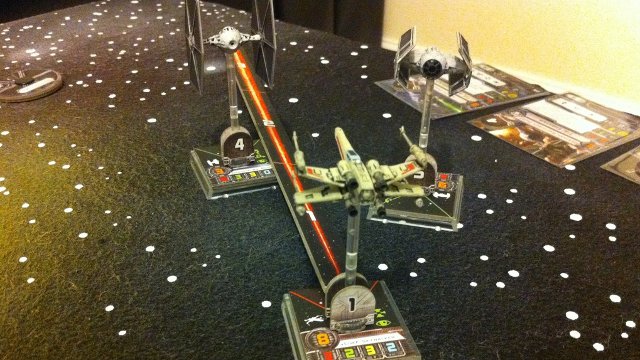 It’s a simple, streamlined game and makes for a smooth, fast play experience that feels the way it should, filled with tension as you try and predict where enemy ships might go and excitement as the dice spill over the table. The individual movement, action choice and statistics for each craft are spot on from the nimble but fragile TIE fighter to the bloated gun platform that is the Y-Wing, wallowing in the vacuum. Planning your own movement and trying to anticipate the enemy provides a tactical base into which action choices insert a solid extra peg. Dice and cards make a heavy contribution toward success. There seems a good balance of these two elements in determining a winner, the game rewarding both skill and luck.

But for gamers used to all the decision making happening as the game plays out, X-Wing may provide a surprise. Like most points-based squad building games there’s a significant amount of strategic pleasures to be gained from looking at ship, pilot and upgrade combinations and building the most effective force you can with your points allowance. But again, like most points-based squad building games that means there are so many possible combinations that they can’t all be balanced, and there’s a risk of one-sided games and petty squabbling over one faction being “better” than another. Ignore it. There’s strategy here, but what the game is really about is playing the Star Wars theme in the background, and pushing primal buttons in the collective geek brain.

The base game comes with one X-Wing and two TIE fighters, each with four pilots and a small collection of upgrades. It’s not enough. With only three craft there’s no synergy, no outflanking, little interest in squad building. To try and wring maximum value from just three ships the game provides scenarios to build on the basic dogfight. One heavily favours the rebels, another the imperials, but they do offer variety and they do work with custom-picked forces and they illustrate how much mileage there is for fans to do their own thing with the game. The box also has some tactics-free quick play rules which are of no interest to hobbyists but are simple enough to parents play the game with young children, and three ships will suffice for that.

Ideally though, you need more. Doubling-down on base game sets is the best value option but also the least interesting. Far better to pick from the expansion miniatures. The Y-Wing is my personal favourite as it feels qualitatively different to everything else available right now, with its ship-disabling turret weapon and ability to suck up punishment. Two expansions, one for each faction, is enough. More is better if you can afford it. Just be aware that it’s the sort of expandable game that can rapidly become a money pit. There are more and bigger ships coming in the near future, including the Millenium Falcon. You know you’ll want one. Budget for it in advance.

You’ll want one because when the ships are on the table and the dice are flying alongside them, you can’t help but get sucked into the slipstream. The painted figures look fantastic as they close to combat range, jockeying for position. The endless variety gained from open movement, squad combinations and different scenarios ensures a vast mine of narrative potential, each game, each thrilling ride inscribing its own little legends on the collective consciousness of your group.  The only barrier keeping you anchored in tedious reality is the lack of a star field background to play on. Make one.

X-Wing seems to be the realisation of something that I thought would never exist, but have often wished for: a miniatures game tailored for the board game hobbyist. You get all the value of customised army building and the joys of open, distance-based maneuver and combat on a tabletop, unconstrained by the confines of the board. You have none of the grind of assembling or painting figures, and clever design tweaks ensure measurement dispute over things like positioning and firing arcs are minimal. But if you’re prone to arguing about rules trivia, you’re playing it wrong. It’s a game about tension, excitement and reliving your childhood dreams. It’s an expensive game about priceless things. Play it.