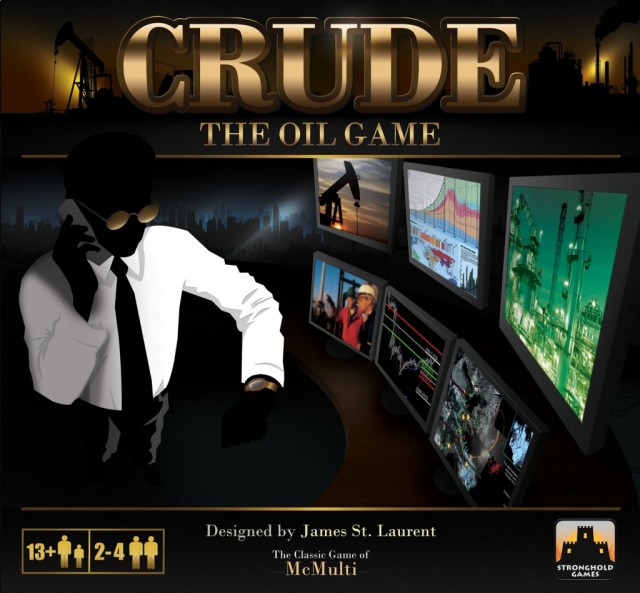 Stronghold Games’ new issue of Crude: the Oil Game is a significant reprint- not only because it is the only official reprint of the original 1974 design, but also because it’s an outstanding game that in some ways represents the missing link between early Sid Sackson-style abstract strategy games and more thematic European family games. And it’s also a really fun, compelling business game to boot with big, chunky plastic oil refineries and volatile economic conditions that precipitate the rise and fall of fortunes.

Crude was somewhat obscure during its original release, probably because there wasn’t quite yet a specific market for this kind of game. It disappeared, but in the late 1980s, a German publisher called Hexagames ran through two printings of an unauthorized version of the game that replaced all of the cardboard chits with plastic pieces and the old artwork with a very, very blue color scheme. They called their version McMulti, and that’s the edition that most gamers today might have seen- if they’ve seen the game at all. Prices for copies went through the roof, particularly as the Eurogame explosion happened and Crude/McMulti was regularly cited as a predecessor to Settlers of Catan.

Each player represents an oil tycoon, setting out with $200 million and a 6×6 grid upon which drilling sites, refineries, wells, and gas stations will be placed. The goal is to turn that $200 million seed into $750 million by buying low, selling high, and reacting to market demands. On each turn, a player has the option to buy or sell to either a foreign or domestic market with values automatically adjusted to reflect surplus or demand based on the quantity of oil barrels on each chart. Two standard six-sided dice are rolled, and these give a sort of coordinate to determine which space or spaces are activated. What’s more, the player on the left gets to activate based on one of the dice, and the player on the right does the same but using the die placed on the other side of the grid- see the Settlers resemblance?

So your sites can strike oil if they get hit by both dice, your wells produce black crude barrels, your refineries convert a crude barrel into a red gasoline barrel, and your gas stations let you sell gas barrels to a fluctuating consumer market. It’s a simple process with only two resources- a raw material and a finished product. Crude is one of the first games I know of where converting one resource into another is a defining mechanic.

Purchasing assets is particularly interesting because the values changes. During some economic climates, they may cost more or less. You might find yourself needing to purchase refineries to handle a surplus of crude, but hamstrung by a bad economy that’s made them too costly to be profitable. Economic conditions change based on a die-driven timer that counts the differential between the player’s die roll, so a sudden change can occur before you know it. What’s especially interesting is that each economic climate card is geared toward positive or negative growth, so it’s possible to do a little forecasting and speculation.

Add in some doubles-activated event cards, some of which can have a devastating financial impact on the unprepared players, you’ve got the makings of a simple but challenging business game. It’s definitely a game about gambling, speculating, and taking measured risks. Although direct player interaction is low and it’s a fairly abstract game, the narrative resides in these rising and falling fortunes and both strategic and tactical decision-making. I love that everything in the game can be sold for a profit- it’s even possible to liquidate your facilities if the economic conditions change and their aftermarket resale value goes up. Another thing I love about it is that it’s a game that lets you completely shift gears and try a different approach- adaptability is a key skill.

Crude definitely feels like a descendant of Acquire and a direct antecedent of Settlers or even more complex economic games like Power Grid, and that makes this something of a surprising design for 1974. It was a design ahead of its time, but it remains very accessible, playable, and appealing. Its present availability thanks to Stephen Bunocore and Stronghold Games is enough to earn Crude the highest praise, but the caveats are that the production is probably a little too stodgy-looking, it can be a fairly long (and sometimes repetitive) game, and you really want to have four players to capture the full dynamic of the crossover production rolls and market cycles.

It’s also worth noting that the game’s original designer, James St. Laurent, was directly involved with the new edition of Crude until he passed away last year. He never published another design. Maybe a one hit wonder, but that one hit is a significant one and a great, modern business game that may finally get the wider attention it deserves.