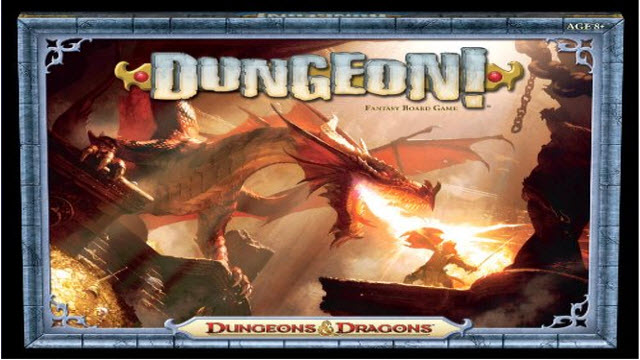 I can vividly remember the first time I saw a copy of Dungeon! Visiting some of my Dad’s friends who had a son a year or two older than me, he pulled a copy out from under his bed and suggested we play. I was gobsmacked, not only because I’d unwittingly stumbled into the company of a fellow geek in the making, but because up until that point I’d only ever considered Dungeons & Dragons as a role-playing franchise. The idea that it could extend to a board game seemed stunningly innovative to my young self.

But it seemed to cover the bases well, with a recognisable premise of heroes venturing into a multi-level dungeon to kill monsters and collect treasure, with danger and reward increasing the deeper you went. And the monsters and magic and treasure that I encountered that afternoon were all bona fide dungeons and dragons exports. So we played, and played, and played again. I was amazed that the considerable complexities of the role-playing game could be boiled down so simply and effectively.

Because it is simple. You pick a hero, and maybe a few spells from a choice of just three, move five spaces per turn and if you walk into a room you draw a monster card appropriate to its level and roll two dice to see if you can beat it. If so, collect a treasure card from that level. If not roll another two dice to see if it beats you. First to collect a set amount of treasure wins. Explore a dungeon, kill monsters, grab loot. It’s Tomb, only much faster and simpler. And much better.

Tomb, of course, was a game made for adult hobbyists. But its problem was it added length and complexity to the basic formula without adding strategy or fun. Dungeon! is a game for kids, and it does what it does in a wonderfully refreshing no-frills manner, caring little for the niceties of modern game design. In fact this new fifth edition of the game, originally published in 1975, has changed one rule, and one rule only: now, a trap causes you to lose a maximum of two turns, whereas previously it was up to six. That’s it. It’s an improvement, but it’s also like 30 years of game design never happened.

But why should anyone care? Remember, it’s a game intended primarily for children, not for adults to play against one another. Children don’t need complexity, or detailed narrative, because they have the imagination and the credulity to fill in all the gaps without the sort of creative hand-holding that adults need. Many of the classic children’s games that make up the staple of occasional family gaming are founded on similar principles to Dungeon! A lot of luck, a tasty serving of narrative and a bit of gambling. They haven’t changed in decades, so why should Dungeon!? 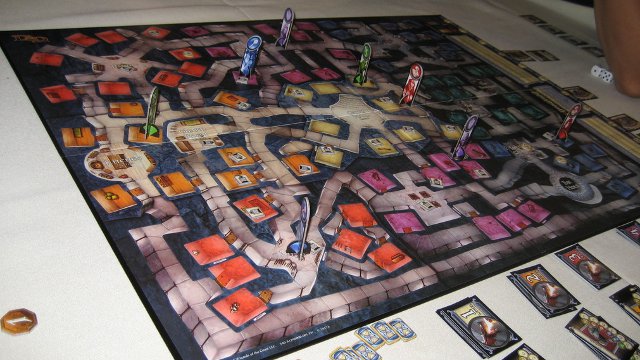 What has changed are the components and the price. Earlier editions were garish, clumsy things, furnished with art that looks laughable by modern standards and with components outsized beyond need which forced the price up. This edition has great art, especially on the new board and it has serviceable components. Cardboard standups instead of pawns is a bit annoying, and the cards have gone too far the other way, now being too small for comfort. But these small sacrifices have been made in the service of pushing the price to bargain basement levels, allowing it to undercut mass-market tat and even put it in the range of teenage pocket money.

One thing has been added, and that’s official solo rules. There are three suggested ways to play, two of which are badly flawed. The third, however, is a lot of fun. In hunted mode, you draw a powerful monster and scamper round the dungeon as it pursues you, trying desperately to gather enough treasure for the win before it kills you. Even more random than usual, but oddly tense and exhilarating. It’s probably the most enjoyable way to play without a child to share the experience with. And frankly, it’s probably worth the meagre cost of the game all by itself.

It’s worth it because it’s plain, dumb fun to trawl your way round the rooms on the board, actually encountering nasties you only ever read about in the Monster Manual, gloating over your hoard of gold, poking your atrophied adult imagination into wondering what might have been perpetrated in named rooms like The Torture Chamber or The Hole. And it’s not like it’s completely skill-free either. Dice win the day, but you can place tiny bulwarks against fate by choosing effective movement paths and balancing the risk to maximise your gain. 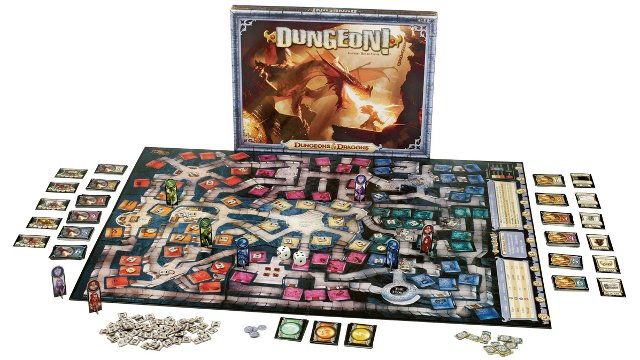 And if you do have kids, and you like a good thematic game, you can’t pass this up. The world is awash with mass-market children’s games based on dreary real-world or educational themes, and with European imports made especially for youngsters. The mantra of simple rules and short play times suits children’s games extremely well, after all. The style of game I fondly remember playing as a child, featuring vampires and giant spiders and battling robots, seems to have gone out of fashion. Dungeon! is back to remedy that, a game that theme lovers can use to introduce their offspring to the questionable delights of underworld delving. It’s Gulo Gulo for the Ameritrash crowd.

I hate to remind you all, but we’re coming up to Christmas, the one season where ordinary families can be relied on to gather round a roaring fire and play board games together. Games that, perhaps, have been newly birthed from their gift wrap and shrink after dwelling beneath the antiseptic smell of pine for a few days or weeks. You know the usual culprits: Monopoly, Life, Scrabble and others will be bringing joy and annoyance in equal measure to millions this December. If there is any justice in the world, Dungeon! deserves a place alongside its peers on that list.

One thought to “Dungeon! Review”