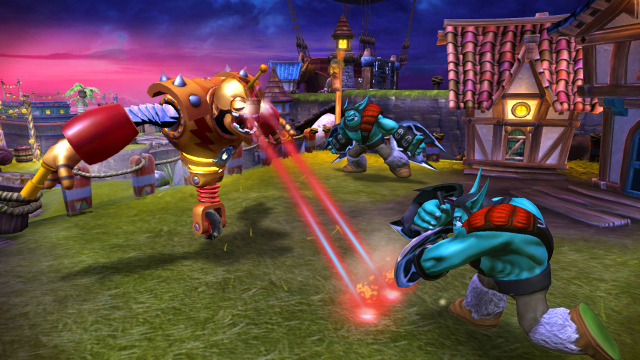 Given my penchant for toys, it shouldn’t be any surprise that I wanted to take Skylanders Giants for a spin. I successfully ignored the game/toy combination the first time around, knowing full well that heading down that path would lead to a Trigger Happy sized hole in my wallet. Alas, the pull of plastic figures that were now giant sized and also lit up was too much to resist and the game was mine.

Amazingly enough, not only is this a well done action game, but it’s also surprisingly easy to ignore the fundamental purpose of the game, namely to fill your home with oodles and oodles of toys. 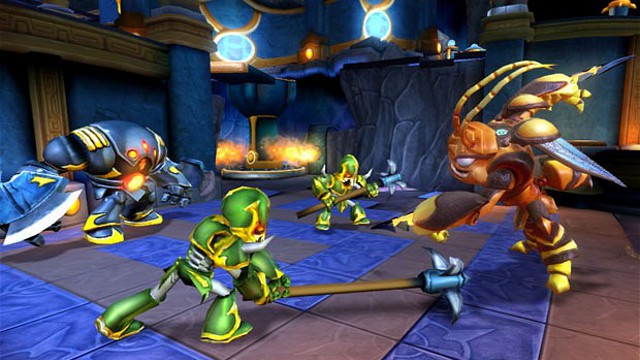 The central premise behind Skylanders is the ability to take a real life toy, or in this case, an incredibly detailed and colorful plastic statue, and make it come to life in a video game. As kids, we’ve all dreamed of our toys coming to life and having grand adventures, and this is exactly what the Skylanders series allows you to do. Place a toy on the Portal of Power and like magic, it comes to life in the game, complete with it’s own voice, statistics, attack moves and upgrade path.

As I mentioned before, the game comes with everything you need to play the game from start to finish, consisting of a portal, two regular characters and a giant. If you already have a portal, a separate version of the game is available with only a giant. I expected the game to shove advertisements for additional toys in my face like crazy, but Toys for Bob shows an incredible amount of restraint in this regard, presumably understanding that not every household can buy into the “gotta catch ’em all” mentality, especially when the figures start at ten bucks and go up to fifteen for giants. Sure, there are preview movies available for the characters, so you can see what you’re missing, but the fact that you can go through the entire game with what comes in the package should be commended.

Granted, if you do have a Skylander of each elemental type, there’s more content, and more opportunities to level up your characters, so you’ll probably end up wanting to pick up additional figures at some point. As you travel throughout the Skylands in your quest to defeat Kaos and stop him from resurrecting an army of robotic overlords, you’ll come across areas that require a Skylander of a particular elemental type to access. Once opened, any Skylander of any elemental type can traverse the puzzles and obtain the treasure, or stat boosting hat contained within, but seeing how Skylanders of the corresponding elemental type do extra damage and heal while in these areas, I found myself more than happy to let my lesser known figures stretch their legs in these areas. 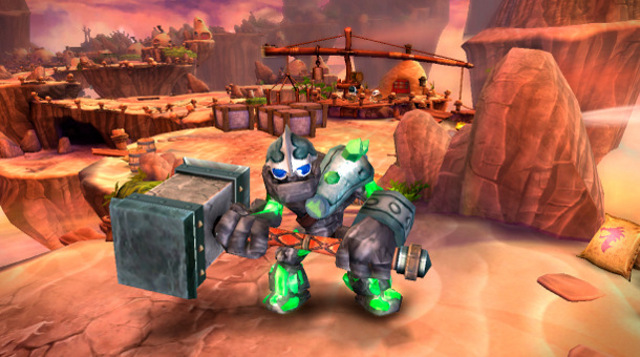 Similar areas are sprinkled throughout the game’s branching levels, allowing you to level up individual figures as well as give lower leveled figures a better chance of surviving. Choosing to stick with a particular figure until they reach the level 15 cap is certainly an option, however I found that switching figures as I moved through these zones ended up being a better use of my time. For one, if you use a Skylander that corresponds to the current elemental type, they get more experience, allowing them to level up more quickly, but also, the move sets and statistics of the various figures are all different enough to make you change your play style and come up with different strategies for facing the increasingly powerful enemies.

On a practical note, as the figures act as extra lives, having as many figures leveled up as possible gives you the best chance of surviving the late game levels. Of course, you can always drop the difficulty level if need be, but seeing how there are no mid-level checkpoints, running out of figures means doing the entire level all over again, an incentive to having the best army of plastic if ever there was one.

Unfortunately, the time spent leveling figures and the lack of any real incentive to having more than one figure of each elemental type works against the game’s purpose of selling you toys. Unlike in a Pokemon game, where catching them all requires a combination of timing, patience and in-game currency for Pokeballs, catching them all in Skylanders requires actual, real life money. Sure, each figures comes with a heroic challenge that any Skylander can take part in, but as these are usually timed challenges and not full levels, the main draw is the figure itself and the corresponding character. Seeing how your only option for leveling up your new figure is to play through the story all over again, or take part in battle arenas that you’ve no doubt already conquered, it may not be worth it to buy a new figure just to own it. 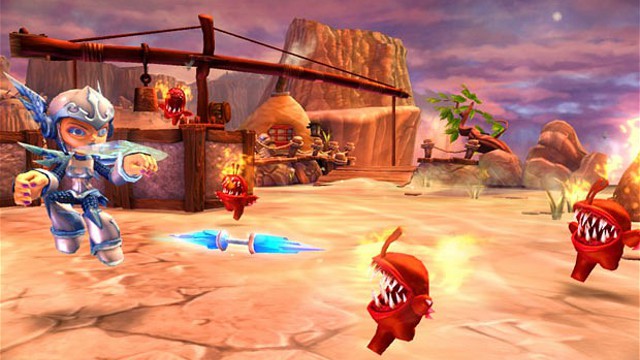 The only way the game encourages you to buy more toys than necessary to unlock everything is with the accolade system. Some accolades are earned through completing the story or defeating the battle arenas, but a good chunk are earned for buying more figures and placing them on the portal. At least the accolades earned through real life purchases give an experience boost to all figures, which should make leveling up your new Shroom Boom a little easier.

Then again, this is a game for kids and if kids are capable of anything, it’s repetition. The game supports local, two player co-op, and in a nice touch, everything about the characters, including their current hat, experience level, attack powers and bankroll is saved to the figure itself, so you can bring your figures over to a friend’s house, slap ’em on the portal and get to playing. It reminds me of when I used to bring my Star Wars figures over to my friend’s house to replay the epic battles of the movies, only now Han Solo is a anthropomorphic eagle with an air blaster. 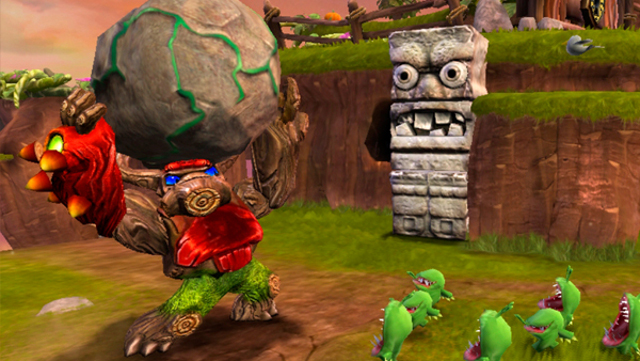 As much as I was interested in the game for the toys, the game itself is genuinely good. Kaos reminds me of the Saturday morning cartoon villains of my youth, all bluster and incompetence and the rest of the game’s characters are all well done, including an elderly British elf with a crippling fear of clouds. The various character models for the different Skylanders are distinctive, as are the attack moves and voices. Double Trouble plays completely differently from Drobot and once you start slapping turbans and bronze top hats atop their heads, the personality factor only goes up. The levels are well designed and encourage multiple runs in order to get all of the collectibles, find all of the areas and complete the level under a certain time limit to get three gold stars per level.

Activision knows it has a gold mine here, hence the newly unveiled iOS games, all of which allow you to use your physical Skylanders collection and the free, web based Skylanders Universe game. It certainly helps knowing that buying a new figure will allow you to bring it into other properties aside from the console game, but seeing how some of these other games also cost money, it’s also clear that the gold mine Activision is plumbing is located deep within your wallet. Still, if the game is well done, the toys are fun and their cheap enough to be purchased with allowance money, or money earned from doing chores, what’s to complain about? I’ve spent plenty of money on DLC over the years with nary to show for it but some achievement points. At least with this game I have a shelf of cool figures. That’s well worth ten bucks.

3 thoughts to “Skylanders Giants in Review”