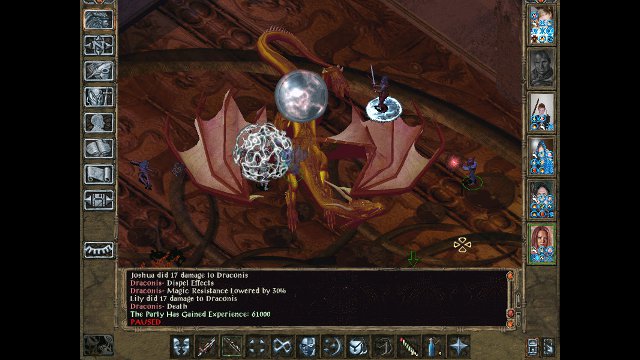 Today is the release of Baldur’s Gate: Enhanced Edition for the PC (iOS and Android versions coming soon) so I thought I’d mark the occasion with one of my absolute favorite gaming moments, from one of my all time favorite games, Baldur’s Gate II. I know, I know, Baldur’s Gate II is its own game, and shouldn’t be lumped in with Baldur’s Gate, but the truth is, while I enjoyed Baldur’s Gate, BG II became a way of life for me. I absolutely adored that game, to the point where I’m not sure if I would play a re-release or not, for fear that my memories would get sullied by harsh reality.

This particular moment comes from the Throne of Bhaal expansion pack, a set of quests that has the player character on a mission to defeat The Five, a collection of five Bhaalspawn who have gotten together to do terrible, rotten Bhaalspawn things. One such member of The Five was Abazigal, a nasty, half-dragon bugger guarded by all manner of foul beasts, including his son Draconis, another nasty, half-dragon bugger. This story is about how my player character, Tipsy McSwagger, the Drunken Thief, singlehandedly defeated Draconis using nothing but guile, trickery and a ton of gear my party had been toting around for like sixty hours.

Come with me, to Tethyr! 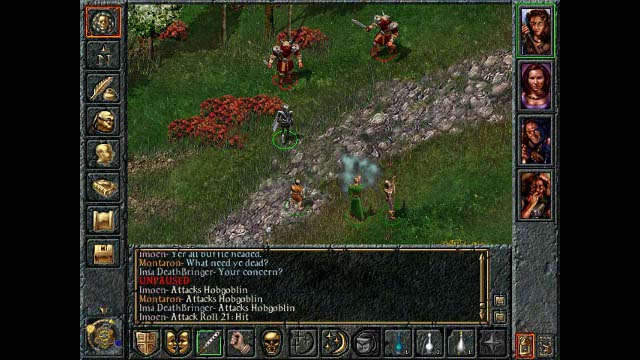 Draconis was a tough nut to crack, I’m not gonna lie. He starts out as a high level mage, so there was a lot of time stopping and high level spells being flung to and fro. If you managed to get Draconis down to about half of his hit points, he’d transform into a giant green dragon, and if you thought a high level mage was bad, dragons are even worse, what with them being high level mages, only high level mages with acid attacks, wing buffets and claw attacks. Those wind buffets were the worse, as any melee attack resulted in half my party getting scattered to the winds before they were assaulted with acid and foul majiks.

After a number of full party wipes, I stopped throwing my party to the dragon wolves and decided to get smart about the fight. In this case, “getting smart” meant looking at my skills, my inventory and my party’s inventory to come up with a strategy that was more than six people getting wiped out again and again. I realize this isn’t so much “smart” as “basic video gaming skills” but hey, we all have to start somewhere.

By the time you get to the Throne of Bhaal expansion, you’ve got some pretty jacked up party members, all of which have various epic level abilities. In Tipsy’s case, he had a number of spike traps and exploding traps as well as the ability to use any item. That last one is incredibly important as it meant Tipsy could use any scroll, magical wand, absolutely anything without any class restrictions. I guess if you steal enough things, you eventually get quite handy in their usage. It’s a far stretch of logic, sure, but I’ll take it. As I had chosen the Swashbuckler kit for Tipsy upon starting BGII, he also had improved whirlwind, which, combined with Tipsy’s dual wielding skills, meant he could lay the hurt on dudes in a quickness. 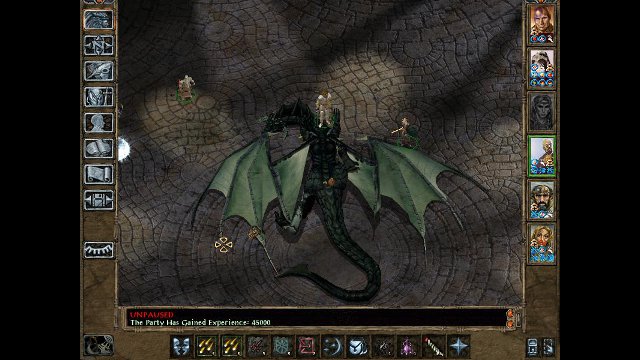 I had many times to observe the pattern of the fight, what with all of the dying and such, and one of the things I noticed is that Draconis always buffeted my party to the same place and then always came after to me to further torment me with acid death. As I thought about this, a plan started to take place, but a big component to the plan would be getting Draconis into his dragon form as quickly as possible and then me getting scarce just as quickly. Unfortunately, my ability to hide in the shadows wouldn’t be much use to me as I’d have a giant, pissed off dragon on my tail, but maybe I could use something else.

I picked through my party’s inventory and found exactly what I needed. I grabbed a couple of swords that lowered THAC0 with every hit, including one that did extra damage to dragons. From my mages I grabbed a time stop scroll and a wand of invisibility. I grabbed some other trinkets and potions, just to be safe, but the wand and scroll was the most important. Fully equipped, I set off.

The first thing I did was march my party to the edge of the map and then sternly tell them to stay the hell away from me. My plan’s success hinged on Draconis going after me and me only and my party would only distract my scaly friend from his intention to dismember me. Also, shit was about to get real and I needed them somewhere safe. Next, I used up all of my spike traps and exploding traps, seeding the map with a concentrated dose of what I hoped would be explosive death. The party stowed away and the traps set, I equipped both swords, used the wand of invisibility and marched to Draconis. 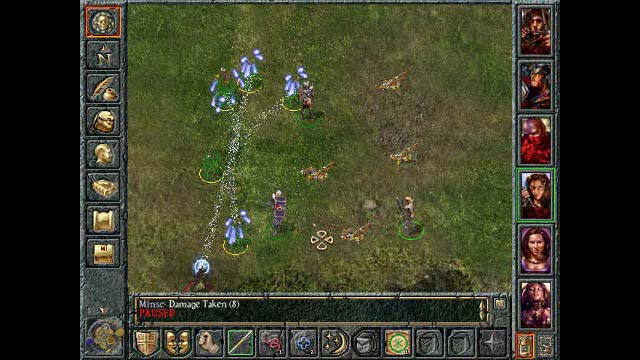 In an odd AI moment, once I got to Draconis, his scripted dialog began even if the AI didn’t know that I was there. Once he was done talking, Draconis went into attack mode, but without anyone to attack, he just kind of stood there. I took this opportunity to get behind him, pop off my time stop scroll and then whirlwind the ever living shit out of him. My goal was not to kill him, as I’m pretty sure I wouldn’t be able to, and once I went on the offensive, my invisibility wore off which meant that all of Draconis’ cronies would make short work of me. No, my goal was to get him to pop into dragon form, which he did, quite nicely, just as time resumed.

If was right, and man was I hoping that I was right, once Draconis went full on scaly, my melee proximity would trigger a wing buffet. In one of the rare A-Team moments where one of my plans comes together, once Draconis was in dragon form, there went the wing buffet, right on schedule. And where did he buffet me but right into the middle of the half dozen traps I laid for him. Not wasting a second, as soon as I was mobile, I popped off another usage of the invisibility wand, rendering me not only invisible, but immune to any ranged attacks from Draconis. If he wanted to hit me, he was going to have to come and find me.

As you find out by playing Baldur’s Gate II, there are plenty of Bhaalspawn in all shapes and sizes. Some are strong melee fighters, some are vicious spellcasters, some are drunken rapscallions and some are big, dumbass dragons who can’t tell a trap when they’re about to walk into one. Draconis marched right into my circle of slaughter, the traps all exploded and he died. Just like that, an enemy who had wiped my entire party multiple times was completely and utterly decimated by one guy with a stick, a piece of paper and two magic knives. Once he was dead, I let slip the dogs of war by telling my party to join me and they made quick work of Draconis’ followers.

I have no idea how the rest of the battles went for me, but seeing how I finished the game, I got through them somehow. I do remember this battle, though, not only because I came up with an awesome plan that totally worked, but because the game allowed me to come up with a plan like this in the first place and not through some weird exploit or other unintentional bit of digital trickery. Everything that I did, the game allowed me to do because I had chosen the right abilities to do it. When a game works that well with the rules it set out for itself, how can you not love it?