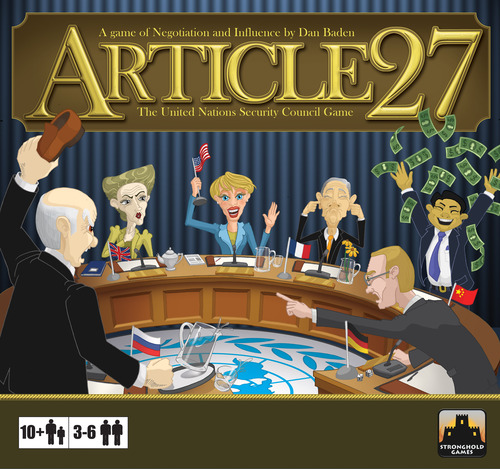 I’ve known Dan Baden, the designer of Article 27: The United Nations Security Council for years. The man is (or at least he was, before rehab) an insane game collector. In particular, he’s a collector of proto-hobby games like the old 3M bookshelf games, Sid Sackson classics, and I think he has like four copies of Jati- one of the rarest board games out there. So it’s not very surprising to me that Article 27 feels a lot like those kinds of games. And like the designer games from the late 1960s and 1970s, it’s a little mathy and probably too abstract for modern gamers playing under the mistaken belief that “theme” comes from flavor text and artwork. With that said, if it had come out as one of those 3M bookshelf games or under the early Avalon Hill imprint, we’d likely be hailing it as a timeless classic of the negotiation game genre.

Article 27 strikes you as different from the moment you open the box. Aside from the player screens and panels, where bribes and Security Council proposal offerings are tracked, the game comes with a freaking hammer. And yes- you will be pounding said hammer on the table. I can’t say that I’ve ever played a game with a hammer in it before. But I have played lots of pure negotiation games, and this is one of the more fun ones I’ve played in quite some time. It’s quick, fun, and feels quite original while subtly referencing genre classics like I’m the Boss and Intrigue.

The idea is that each player gets to be the Secretary General of the United Nations for one turn. Color-coded issue tokens are drawn from a bag and “tabled”, meaning that they’re up for discussion. Each token also has a symbol that corresponds to secret agenda tokens, one of which is handed to every player before the game. Each player, before negotiations start, also draws tokens to fill a chart behind their screen that designates what value each color (or “issue”) will have. Values can be positive or negative, and multiple tokens can combine for a sum value. This gives the player an idea of what they should be aiming for in a given round of negotiation.

Negotiation is free-form, but formalized. Players attempt to convince the Secretary General to include, exclude, or ignore tabled proposal tokens. Bribes, paid in game-winning influence points, can be offered and recorded on the Secretary General’s proposal panel. A player typically petitions to include certain issues that will earn points if it passes with four “yes” votes from the council, but exclude others that will cost points. Additionally, secret agenda issues that are included in a successful proposal are tracked and provide a bonus at the end of the game.

But one of the key mechanical differentiators that this game brings to the table is the wholly thematic concept of the single veto proposal-killer. It’s straight from the bylaws of the United Nations- if one member from the Security Council (which includes Germany in the game, extending reality just a touch to accommodate six players) lodges a veto, the entire vote is off. It’s an always-on nuclear option, and in a game with only as many rounds as there are players- it can be devastating. It’s a tremendous bargaining chip, and players will use to bluff, threaten, and intimidate throughout any given game- but I’ve played games where it’s never even actually used. The threat of it is what makes it brilliant, that any player can say “if black is in, I’m vetoing the whole thing”. Or they may demand influence points to withhold the veto. The single-vote veto creates some compelling and quite complicated situations between players, with the Secretary General scrambling against a sand timer to satisfy everyone while also securing his or her own agenda. It can get pretty hairy when you’ve got three players out of six all threatening to veto if their demands aren’t met.

So negotiations- once players get a feel for what’s at stake and what they can leverage- tend to develop into these crazy donnybrooks with occasional yelling and constant bartering. All players are involved at all times, and the tyranny of the sand timer- coupled with the inevitability of the Secretary General bringing down the hammer on talks- keep things brisk, lively, and engaging throughout. This is not a game where you’ll be staring face down at a player mat for its duration.

But it is one that has a little more math than I’d like. We’re talking simple addition and subtraction, not long division or anything like that. Since values are numerical and summed, the internal thought process behind negotiation too often falls into the “if this happens, I get X points…if that happens, I get Y” rut. It’s an analysis layer that some players will appreciate more than others, but for my part I’m not a big fan of weighing out X and Y at face value. This dovetails into the other minor issue I have with the game- despite its great sense of conceptual theme, the game falls somewhat short of bringing the subject matter around full circle. Notice that above I referred to the issues as colors. They have specific nomenclature tied to vaguely real-world issues, but no one will ever say “arms reduction” or “humanitarian efforts” during the game. You’ll just call out the colors.

It’s a minor issue, really, and as I stated before it keeps it in line with what you’d expect from an old fashioned game influenced by Sackson and the 3M bookshelf games. It also fits in with the scope of the game- this is a thirty to forty minute game, even with six players. And ultimately, it’s not really about those things, it’s about engaging with and bickering with your friends and family under the strong thematic concept of the UN Security Council. But that extra touch of verisimilitude might have added an even greater sense of high stakes and player involvement in the affairs presented.

Otherwise, Article 27 is another great release from Stronghold Games. I don’t usually review games designed by friends or people that I know personally, but this is one that I think deserves more attention than it may get this post-Essen holiday season. It fits right in with the kind of game that I currently favor- simple rules, short playtime, high player interaction, minimal components, and maximum fun.