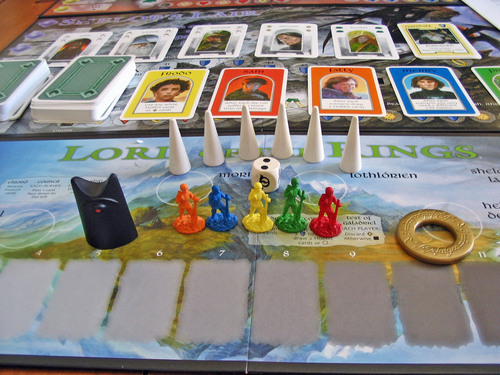 With The Hobbit soon to hit the theaters and a pretty great Lord of the Rings-themed MOBA just released on the consoles (review forthcoming) it looks like Tolkien’s in the charts again, so to speak. I’ve had a touch of Hobbit Fever myself and I’ve been slaking my thirst for all things Middle-Earth chiefly by playing the decade-and-change old Reiner Knizia Lord of the Rings board game. I’ve had an unusual history with this game. I bought it when it first came out, one of the very earliest Fantasy Flight Games releases published under license from Hasbro. It comes from a time before the Jacksonian epic, before Viggo and Magneto would become a part of the Lord of the Rings story. The artwork is vintage John Howe, the components look old-fashioned by today’s standards, and it falls somewhere in the middle of Knizia’s greatest era of design work. And it was also co-op when co-op wasn’t cool.

I have something of an up-and-down history with the game. I bought it when first came out, and it was during a period when Eurogames were still much closer to that classic German family style than the Boardgamegeek.com style that titles like Princes of Florence ushered in. I liked it but didn’t love it and the folks I was playing games with at the time really didn’t like it because it was co-op. They didn’t want to “play against the board”. As time went on and more baroque, elaborate games like War of the Ring showed up a couple of years later, Knizia’s LOTR lost favor with me altogether. It didn’t seem as thematic, narrative, or compelling. I fell into the idiot trap of assuming that playing Friendship cards couldn’t be thematic. Like many gamers tired of Eurogames in the mid-2000s, I bought into the lie of flavor text and superficial theme.

Around 2006, I came back around to the game. I actually wrote an apology to it at the old Fortress: Ameritrash blog. I was declared a “hypocrite” by some dogmatic Ameritrash types for changing my opinion on the game. I had played it a few times with a more receptive, fun group and with the great expansions, Friends and Foes and Sauron. I loved getting beat down and annihilated by the game. But then the Battlefields addition came out, and after playing it and being disappointed with it because it really was too abstract and I didn’t care for the Battle of Helm’s Deep depicted literally as a flowchart, the game was shelved again until just a couple of weeks ago.

Picking it up over a decade after publication and after playing countless other “thematic” games including several Tolkien-themed ones, I’m looking at the game with fresh eyes again. And what I’m seeing is a game that is a masterpiece of proper abstraction, conceptual theme, and player engagement.

Abstraction is a tricky thing because it’s where you can inadvertently disengage that bridge that connects the player’s imagination to both the subject matter and the process or structure of a game. There has to be adequate justification for that process and structure within the subject matter or you’re suddenly playing a mid-2000s Eurogame that is all mechanics with no actual game- or thematic meaning. But where Knizia gets this right in Lord of the Rings- even though you’re playing cards with friendship or travelling icons on them to move a pawn along a track that represents some facet of a particular section of the story and collecting shields to spend on Gandalf cards- is by connecting these mechanics very specifically to the major themes- not specific events, actions, or characters- of the novel.

Lord of the Rings is a supreme example of conceptual theme- the whole game is the journey from Bag End to Mount Doom, with the boards metering the specific, narrative details and providing some potential branches and alternative results based on outcomes. This is one of the key themes of Tolkien’s work- travelling. Travelling is more important in the stories than the martial action that most fans tend to favor when it comes to Tolkien gaming. But more than that, the cooperative nature of the game, the limited resources, and the crushing difficulty that inevitably requires players to sacrifice themselves to Corruption or face defeat illuminate the meanings and subtexts of the books far better than anything in War of the Ring, the LOTR LCG, or anything else. By the end of the game, whatever Hobbits are left to struggle through Mordor are going to feel exhausted, beaten, and facing impossible odds. But the game gives you plenty of opportunities for skin-of-the-teeth escapes and die-rolling uncertainty.

All of the above results in a fantastically engaging, emotional experience that transcends playing those Friendship cards to provide a higher gaming experience. This is a game about the same things that Lord of the Rings is about- it’s just occurring in a different medium. It attempts a retelling of the story, but allows plenty of player agency. Particularly in interacting and coordinating with other players to overcome adversity and make decisions. Sure, the game has that Alpha player problem. But that’s more a function of mammal nature than a flaw in the game’s design.

Decisions made early in the gamer end up as regrets later on. The gifts of Elrond may have been, in retrospect, squandered. A Hobbit may be facing down that glorious Eye of Sauron miniature, just a step away on the Corruption track, and really wishing that a Gandalf card or Hobbit ability wasn’t used before. This is a game where ideas like hope, faith, and shared responsibility can become factors. These are uncommon in board games.

I find it completely laughable when people argue that this game isn’t “thematic”, usually citing those darn Friendship cards or the linear sequencing of it all. Yet I fail to see how it’s any less thematic than anything occurring in War of the Ring or Middle-Earth Quest. And I fail to see how those enjoy so-called “thematic games” would not appreciate- and treasure- the intricate and very resonant ways in which this game describes the specific themes that Tolkien expressed in his work. There’s nothing particularly Tolkienian about rolling dice, drawing cards, or moving plastic miniatures around a map. But working together, making difficult choices, and overcoming the odds would fit that description at a thematic level.

But this is a different medium than fiction. The genius of Knizia’s work is that he is able to leverage the board game medium’s unique elements to tell the same (but possibly different) story with the same meanings and subtexts while using many of Tolkien’s proper-noun touch points and specific events from the books to define card and gameplay event functions while also providing the necessary settings. That it does all of this in a fairly slim set of standardized rules is amazing. That the game can bear two quite impactful expansions that manage to cram in more specific detail without becoming an overwrought burden is astonishing.

The bottom line is that there is no better adaptation of the Lord of the Rings to a gaming medium than Knizia’s adaptation. As far as the vaunted integration of theme and mechanics goes, it’s just as successful as Dune or Battlestar Galactica and in some finer, more subtle ways it is those great games’ better. It’s also far more thematic and narrative than many popular games that go to great lengths to prove to the player that they fit those descriptions, such as Arkham Horror. It is one of the world’s greatest stories made playable as one of the world’s greatest board games.