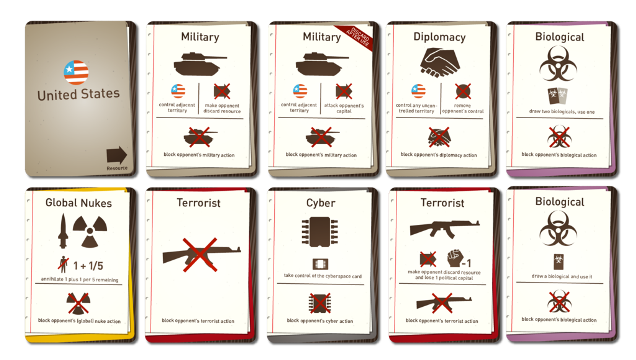 Our third project is now online at Kickstarter.

This is the project that I have most likely had the most direct input in its development. I urged Dirk to do the game — it was a project he had on the shelf for a while and a few months ago when we were discussing the project schedule for Conquistador, I inquired about a game that was at the time called The Next Superpower. When Dirk started to describe the idea behind the game I was immediately interested in doing it. It’s really unlike anything I have played before.

I strongly pushed for us to make this game and wanted to help develop it. It’s right in my wheelhouse. It has a lot of tough decisions to make and almost demands that the players at the table talk to one another. I really don’t know how you could play Tomorrow quietly. It’s a game of, “You’re hitting me with Maelificum’s Whisper Flu? OK, here ‘s a nuke.”

You can try to play the game in the shadows, trying to appease everyone but sooner or later the players will look at your country and at your population and decide that it’s time some of your people need to die. And the thing is — they are probably right. That’s when the negotiation, the pleading, the deal making, and the backstabbing kicks in.

Anyway, I posted the first run of the rules on BGG. Give them a look.I’m really excited about it.

I’d also like to once again thank Jason McMaster for doing the video editing work!

11 thoughts to “Time to Kickstart Tomorrow”