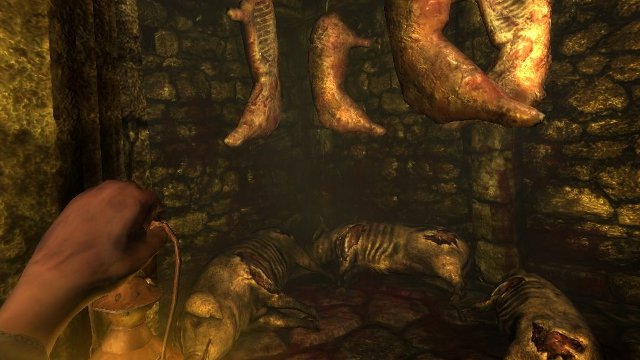 Amnesia: The Dark Descent is a bizarre and contradictory experience. It compels you to explore further, play more while dreading every minute. It leaves you thankful for wrapping up in eight hours, but wanting more. It makes you want to divert your hands from quaking over keys and mouse to pressing the off button. But you won’t.

The plot stumbles over the usual threadbare horror clichés an unreliable narrator, trapped in a crumbling ruin who must descend to murder his former tutor, piecing his chequered past together from diary fragments. A weak Lovecraftian pastiche. What sets the game apart is the uncanny skill with which the backdrop for the story is delivered.

Graphically, it’s satisfyingly bleak. The engine uses a simple but unusual conceit of mouse gestures mimicking physical ones which is intuitive and places you directly into the setting. But the crowning glory is the sound. An unsettling bass drone over which is washed a muted cacophony of scratchings, fevered breaths and minor chords. When this is rent by sudden growls and screams the effect is truly shocking, inducing sudden panic from nowhere.

This ability to conjure terror from thin air ensures the game remains compelling even when there’s nothing happening. The early stages consist of little but wandering the inky gloaming of the game’s environment but are still unsettling. Your avatar goes slowly mad if left in the dark resulting in hallucinations and paralysis. He has a lantern to ward against this eventuality, yet light leaves you exposed as prey to one of the many fiends that stalk the hallways. It creates a contradiction the player can never wholly resolve, resulting in constant tension.

So powerful is this effect that encountering one of the castle’s monstrous denizens actually feels like a release. But it’s short lived. There is no combat in Amnesia: anything you meet can kill you with ease. You can only hide or run, both piling the pressure straight back on. Fleeing the horrors, slamming doors behind you and hearing them being torn asunder by the pursuing nightmare is an experience that can leave you sick with stress.

There are puzzles too, oases of relative calm where you can solve conundrums without fear of molestation. They make good use of the tactile physics of the interface, encouraging you to open hatches and pull levers as you experiment with solutions. Some are fairly challenging, though experienced gamers should prove equal to the task.

There is a passage common to tiresome horror novels where moments seem to last forever as the protagonist waits, frozen in fear. Amnesia is the digital realisation of that feeling, a game where a thirty second dash through a lightless, flooded corridor with an invisible monster at your heels can stretch into a lifetime. It is many fine things: terrifying, unusual, compelling. But it is not, by any stretch of the imagination, pleasant.