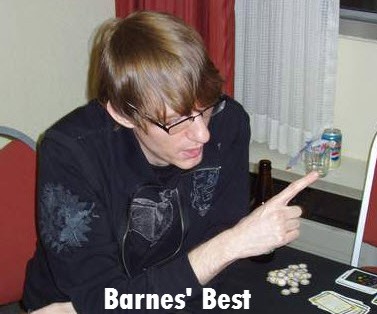 Quite frankly, I thought 2012 was a pretty shitty year for board games. Not just because I didn’t play them nearly as much as I have in recent years due to being in double baby jail with a one year old and a two year old, but also because the really outstanding games were few and far between. There was a whole lot of mediocrity, and then the Kickstarter thing made it possible for any yahoo to sell underdeveloped, unfinished beta prototypes to suckers. There weren’t really even all that many games in 2012 that I felt were compelling enough to try outside of the reprint cavalcade, which caught up this year with Crude, Wiz-War, Merchant of Venus, and Netrunner. I didn’t play Risk: Legacy, the new Descent, Mice & Mystics, or tons of expansions for pretty good games that came out this year. I couldn’t possibly care less about Zombicide, Seasons, or most of the new deckbuilders. Regardless, here are your Barnes’ Best board game picks for 2012.

There were, of course, a couple of really great games that rose above the clutter, made even more cluttersome by all of the Kickstarted crap that’s only just now disappointing “backers”. As usual in my Games of the Year articles, I’ve disqualified reprints and I’m only listing new-in-2012 titles. It just wouldn’t be fair to this year’s new games to shunt them out of recognition because a 30 year old masterpiece is back on the shelves. Because, I mean, seriously- was there a better game released this year than Netrunner? Not quite.

First up, the honorable mentions. Two of these are games designed by personal friends, Battle Beyond Space and Article 27. The former is a great 2-4 player space battle that is dramatic, surprising, and frequently hilarious. The latter is a classically designed pure negotiation game that would be considered a classic had it come in a 3M bookshelf box. John Clowdus did good by us again this year with Tooth & Nail and Donald X. Vaccarino delivered his best game to date with FFG’s excellent cyberpunk heist game Infiltration. Dungeon Command started out good and got better over the course of four releases, offering a simple but compelling dungeon brawl option. And then there’s the Star Wars LCG, which I just started playing in the final days of 2012 but will review favorably next week.

Now, on to the shortlist. The four best games of 2012 and my pick for Game of the Year. 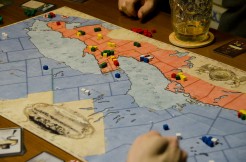 This was one of the first games I played in 2012, and in my review I mentioned that it set the bar pretty high for the year. I knew all year long that we’d see this game in this column. Play after play, this simple team-based wargame has delivered the goods. It’s fun, fast, and full of interesting strategy. The dice-based combat system allows for some surprising strategic detail, the battles range from complete washes to total devastation, and overall the game has an easy flow that rewards risky play- and cooperation between teammates- over rules exploitation, resource management, or other factors. The subject matter may not be the most scintillating and on the table it looks like total cube confusion , but this was one of the best ways to celebrate the 200th anniversary of the titular event.

Spartacus: A Game of Blood and Treachery

This is 2012’s Cinderella story, a game that beat the odds to emerge as one of the year’s top titles. The strikes against it were potential deal breakers. But these first-time designers, publishing through a company that has never done a board game before, came up with an innovative game that is as conceptually thematic as games like Battlestar Galactica and Dune are. Splitting the process between a nasty take-that card game and a one-on-one gladiator battle with a gambling element, Spartacus did an awful lot with the subject matter without getting bogged down in rules. It definitely has the best- and most necessary- rule of the year: don’t be an ass. This great game can be had for around $20, and with an expansion on the way I expect to be playing it into 2013.

The genius of Lords of Waterdeep is that is very much a back-to-basics Eurogame, offering a simple but not shallow worker placement mechanic paired up with a fun- but light- dusting of Dungeons and Dragons atmosphere. It’s hugely accessible, unlike so many games in its genre. In a year where I found myself more attracted to simpler, more minimalist designs I appreciated that the designers of this game really cut through all of the bullshit and got right down to key elements that make these kinds of games work. It’ll never be as deep or intricate as Caylus, but it’s a heck of a lot more fun to play and that counts for…well, everything. 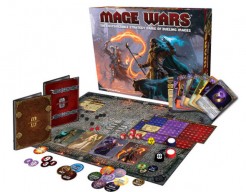 Of course, Mage Wars was hardly a simpler, more minimalist design at all. Instead, this game is a complex, detailed game that feels like an omnibus of hobby gaming concepts. It’s a board game, miniatures game, and collectible card game all in one. It really should have been a hot mess and reading through the rules I thought it would be, but in play Mage Wars offered some of the most rewarding gameplay of 2012. With an intriguing “open deck” style of play that uses binders to allow players access to every card in their deck, the designer made the most of several bottlenecks in the design to keep the decision-making interesting. But it ain’t dry- there’s also plenty of dice-rolling, PVP ass-kicking to do while you’re making all of those compelling decisions. Definitely looking forward to expansions on this one as well.

And finally, Barnes’ Best Game of the Year 2012…it’s probably no surprise, but here we go…

X-Wing is quite possibly the best tabletop miniatures game I have ever played, leveraging familiar subject matter and the particular style of Star Wars’ dogfighting scenes to present a fast-and-furious game that feels exactly right and is suitable for any player that knows what an X-Wing or a TIE fighter are. Low rules overhead and the use of templates to handle all of the measurement keep the usual miniatures table disagreements to a minimum, and the novel card-based method of building out and equipping ships makes for a great metagame. And the miniatures are truly impressive- any Star Wars fan that grew up with the toys is going to love them. Yes, this is an expensive game but if it sinks its teeth into you, you won’t notice that you’re spending your games budget on extra Y-Wings and TIE Advanced instead of on other games you won’t play nearly as much. This is a game that’s great as it is today with only four ships available, and will only get better in 2013 as more are released. This was- and is- the 2012 game I played and want to play again the most. A truly phenomenal game that builds on great ideas from its peers and improves everything across the board.

That’s it then. We’ll see what happens in 2013…it may turn out that X-Wing wins this year too! Stay tuned for the digital edition, in which I make one of those crazy statements about a currently popular game that may get me publically executed.