Now that I’ve thrown off the shackles of disappointment and have started looking at Need for Speed: Most Wanted Not the 2005 Version, The 2012 Version They Named the Same to Be Difficult as it’s own game, I’m having a much better time with it. There’s something to be said for accepting the things you can’t change and just moving on with one’s life. There’s also something to be said for not griping over video games, but if we said that too much, I’d have very few ideas for written pieces.

Having spent more time with the game, I better understand the decision to give the player access to so many cars from the beginning. Every car has five races that must be completed in order to score mods for that car but those races are shared across multiple cars. In other words, if a particular circuit race is a Hard race for the Aston Martin Vantage, it may be considered an Easy race for the Lambo Countach and so on. By giving the player access to a whole slew of cars, the game can cater to the racer who wants to knock down all of the races but could care less what car they use. At the same time, the mod reward system lets those who want to tune their particular ride work on obtaining all of the mods by sticking with a certain car. Plus, there’s going to come a time when all the mods in the world aren’t going to help you take down a Most Wanted racer, so being able to tool around the town and find a new car with which to try may help take the sting out of hitting the Great Wall of No More Progress.

I wish I could tell you that swapping out off-road tires for track tires, or choosing long gears over short gears makes for a completely different driving experience, but I’m just not good enough of a racer to say that. I guess it could be that the game isn’t good enough at showing me the differences, but I’m such a bad racer that I tend to defer to my own incompetence before accusing someone else of it. When I get the opportunity to apply a new mod, I look at the bars for my car’s various attributes. If the mod makes the bars bigger, I apply it. That’s the extent of it. If I keep failing an event, I’ll switch the mods up based on what seems like a logical combination, but other than succeeding where I had previously failed, I can’t tell a lick of difference. At this point, I’m bound and determined to get all of the mods for the Viper SRT not because I think it’s going to turn the car into an automotive super-beast but because there’s an achievement for it and in the process of getting all of the mods I’ll beat Tom’s score in a particular event. I’m coming for you, Chick.

Thankfully, switching between cars isn’t so nebulous in the results, but that’s to be expected in a game where a Ford pickup can be found around the corner from a Bugatti. Granted, if several cars are all roughly the same in terms of statistics, I can’t tell the difference between them, but again, I’m a terrible driver, so I tend to think that’s just me. Two cars slamming into a wall at 150 mph are going to react roughly the same way: badly.

One thing that does bug me about the car stats, though is that when I beat a Most Wanted driver, the car I win should be better than the car I used to win it, otherwise, why did I lose so frequently? I ended switching to the Viper SRT because the Alfa Romeo Concept 4C wasn’t cutting it to obtain the Shelby Cobra. As I cycled through all of my cars, the SRT had the biggest bars, so I went with it. After obtaining a few mods and taking on the Shelby a few times, I eventually won. When I went to compare the Shelby to the SRT, there was no comparison, the SRT was by far the better car. Sure, the Shelby had a head start, but come on. I know I’m bad, but I’m not so bad that my advantages would be negated that much. When I win a new car, it should be the gold standard of my garage until I beat the next Most Wanted racer. Otherwise, what’s the point? 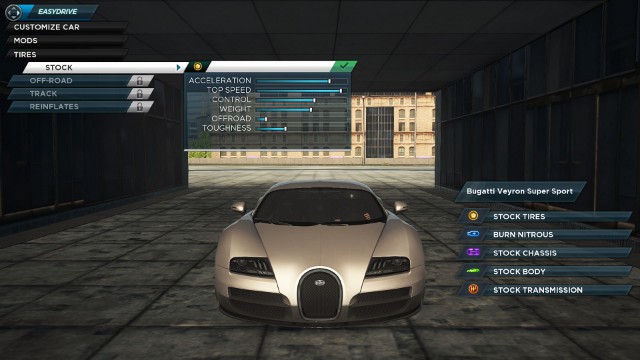 Having done all of the race types up to this point, the only ones that cause me to let out a groan of disappointment when I see them pop up on the Autolog is the speed run. If you ever raced the Burning Routes in Burnout, you know what I’m talking about. Speed runs have you going from point A to point B with the goal of reaching Point B with a target average speed. For example, the Downtown Run event, the only event I need to win so that I can get the aero body for my beloved SRT, has a target speed of 150 mph. That’s the average speed, so things like crashing or braking is generally frowned upon. I can successfully evade the cops in the ambushes (check your speedwall on The Hunted there, Tom), and find that the extra competition in the sprint races and circuit races affords me enough chaos to get a win despite my crappy driving, but speed runs are all about driving clean and “clean” is not an adjective I would use to describe my driving style. Now, if I only cared about the race itself I could switch to a Lexus or some other car and have an easier time, but I’m determined to get the last mod, so it’s back to the driving board I go.

When I’m not racing, which is pretty much all of the time, I spend my time trying to break as many billboard records as possible. There’s plenty of experience to get just driving around, although I still think that Paradise City was a better environment for this than Fairhaven, but so many actions end up in a pursuit chase, which I abhor outside of races. I’m content to tool around leisurely until I find a billboard at which point I try to bust through it and knock it off of my list. If that winds me in hot water with the police, that’s ok. It’s a small price for claiming a billboard from one of my friends.

Next time, getting down in the dirt with NFS:MW.

One thought to “NFS:MW – The Nuts and Bolts of It”