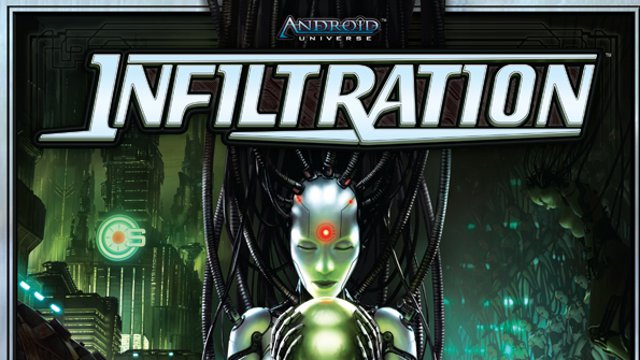 Gaming is littered with quirky little titles that play bait and switch with gamers, masquerading as a style of game they don’t actually provide. It’s not a problem, as long as the game is fun. Indeed it adds to the novelty and charm of the title for the open minded. Dungeonquest, for example, looks like a role-play mimic but is in fact a push-your-luck title and a wonderfully brutal one at that.

Infiltration is equally deceptive. At first glance you would expect this to be a fairly straightforward cyberpunk adventure, where the players take the place of criminals attempting to loot a research facility for information before the police arrive based on a partly-random timer. Collect the most data, and get out before time is up, and you win.

And in a sense, that’s what it is. The game is furnished with quality thematic art and the requisite background quotes and flavour text to add a fake air of authenticity. It also offers plenty of opportunity for the players to interact with people and things in the research facility and to do what criminals in botched heists do best: royally screw one another over for a profit.

However, played with these expectations the game is bound to disappoint to some extent. While the card decks that are dealt from to create a new set of rooms for the facility on each play through are richly varied, thematic and interesting, the same can’t be said of most of the other components of the game.

Players, for instance, have no special abilities. They can take only four actions – move forward or backward through the room cards, interact with the room’s function or loot some of its data. To supplement this they also start with four items which are mostly one-shot variations on the basic actions. But the items deck is pretty small. As a thematic exploration, it works moderately well. As a heist game it lacks the variety and tension required to support repeat plays and has a weak strategic framework against which to make interesting decisions. 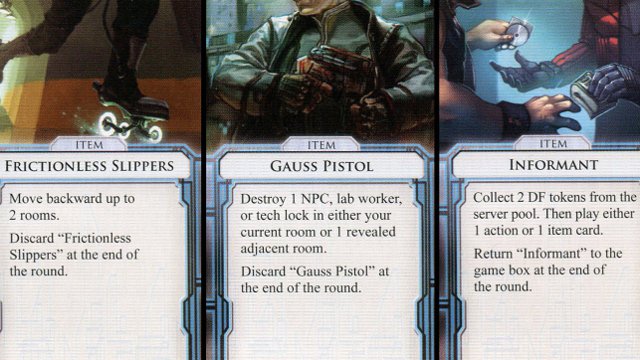 It is, therefore, a damn good job that Infiltration isn’t really either of those things. Sure it’d be nice to see some greater variety in actions and items, but it’s not necessary. Those elements are present but rather than make the game, they just add pleasing extra dimensions to Infiltration’s primary purpose. Which is to be a bluffing game.

The first clue is the way that so much of the game starts face down. Rooms cards can’t be seen until explored or examined via technology. The data files they contain are face-down chips of varying value, and it’s the value you score at game end, not the number of counters themselves. Players hands, and stacks of data files, are hidden from one another. Each turn they select an action individually, play it face down, and only resolve the effects once everyone has chosen.

All this hidden information is absolutely crucial to making the game fun. Many of the card effects add to the sleight and confusion, such as the “Blackmail” item which permits a player to cash in some of his hoarded data files to escape the facility with sublime ease. But its clearest in the action that allow players to steal data in the first place. There’s two variants for this (use “Extract”, trust me) but both mean that players get the most if they’re the first to resolve that action, and less if someone else got there first.

That one point of critical uncertainty alone injects massive tension and psychological manipulation into the game. Everyone has to grab as much data as possible in order to win, so if there’s some left where you are, stealing it has to be a prime consideration. But the same rule applies to everyone. So unless you’re first in turn sequence this round, dare you risk it? Action selection is suddenly transformed into a sweat-soaked frenzy of second guessing and double bluff as you try and work out what everyone else is holding and planning.

READ ALSO:  Might & Magic: Duel of Champions for PC and iPad

That’s just when it comes to downloading data. There is, of course, plenty more. Items can allow you to make sudden jumps back and forth through the facility. Others allow you to break tech-locks or murder employees in certain rooms, releasing more data. There are room effects and non-player characters which will hurt or hinder players encountering them. But you only have one action per turn. It’s all about dare, wondering whether you can waste a valuable action to set a trap for another player, or whether you may become an unwitting victim of your own schemes. It’s all down to those cards held and selected by your opponents in utmost secrecy. 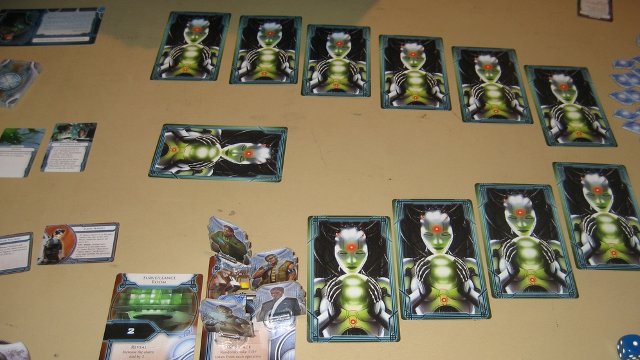 But of course making your decisions in an information vacuum means there’s little mechanical strategy. That’s the source of the common whine about it being excessively light and lacking replay value. The important decisions are all about bluffing and reading your opponents intentions correctly. The replay value is in interacting psychologically with the other players, not with the game itself. It’s a kind of strategy, but not the strategy some gamers might be looking for. Especially not from the same designer as the mechanically stripped down and low-interaction favourite Dominion.

So Infiltration turns out to be a bluffing game in disguise. In this category it stacks up against an impressive number of popular semi-abstract games like Poker which arguably do the whole psychological angle rather more impressively. What makes Infiltration special are the other strings to its bow. The simplistic maneuver and hand management aspects. The beguiling cyberpunk theme sitting on top the the mechanics like a graphical overlay on a pool of data. The direct and often rather nasty player interaction. The push you luck aspect of balancing the data grab with the need to escape alive. None alone may be done particularly impressively, but as props to the core bluff, they function brilliantly.

It’s that blending of relatively common elements into an unusual combination that makes Infiltration. It’s a fast playing and easily learned game that offers you a gripping hour of cyberpunk plot twists, tension and backstabbing and doesn’t let up until the final score tallies are made at the end. Single unexpected plays and events can totally change the course of the game and you have to be able to take that in your stride, while recognising that the skill comes in doing your best to anticipate and ensure things aren’t quite so unexpected. Manage that, and you’re in for a treat.