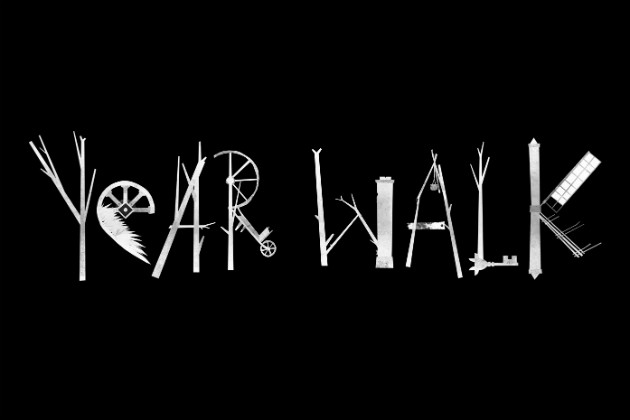 I’m not going to tell you much about Year Walk, a new IOS App from Swedish developers Simogo. You might remember them from a cute game/metaphor for relationships called Bumpy Road from last year. Year Walk isn’t anything like that. Roughly, it’s a very brief and hugely atmospheric adventure game with just a handful of puzzles. It’s based on an archaic Swedish tradition wherein a person would fast on typical feasting days such as New Year’s Eve and at midnight set out for a church. It’s a sort of vision quest myth, as the walker would encounter spectral entities and symbolic figures before reaching the church, where future events might be revealed.

If you really want to know more- because I’m just not going to spoil this masterpiece of chilly suspense, dread, and the impossible ways the supernatural intersects the “real” world- there’s a free companion App that Simogo has released. It’s a couple of pages of text with some very evocative and very spooky woodcut images. It’s all based on actual folk beliefs. And it’s really the key to Year Walk working as well as it does, touching upon deep-rooted, elemental fears and the psychology of myth.

In some ways, Year Walk is as profound a game as last year’s Journey, although it’s a much more insular experience. Its story is vague, revealing itself more after the credits than in its actual gameplay. In a sense, the game becomes a quest to discover this particular story- and for the player to learn the agency to alter how it occurs. I may be saying too much.

It is a horror game. But go ahead and toss out what your idea of a horror game is. This isn’t Dead Space or Resident Evil. The horror in this game is of being alone in the woods at night, the crunch of newly fallen snow crisp in the cold air, lost and wandering. Maybe you’ve been here before? Something has changed. And then, there’s something that should not be. Do you want to follow it?

Play this game with the lights off, headphones on. Play it in one sitting. If you get lost, bear in mind that’s part of the game. You’re supposed to wander- and think. The puzzles are sometimes vague, but you’ll figure them out. And when you’re done, stay after the credits. The game isn’t over.

I’m completely blown away by this simple, evocative game. As a devotee of sophisticated horror, it’s one of the best examples of that elusive quality that I’ve ever played. It’s never cheap. It knows that in the currency of terror, a spot of blood is worth far more than a gallon. It knows that the root of fear is in encountering things for which you have no frame of reference beyond what you believe- not in running from a mindless monster.

There are monsters in this game. Very scary monsters. But they are cool and detached, existing outside logic and residing somewhere between reality and those ancient woodcuts. The very modern papercraft look of the game belies an esoteric, alien darkness that maybe our forbearers were closer to than we are today. And maybe this game is one way that we can sense the proximity between folk belief and the physical world in a way that we’ve lost.