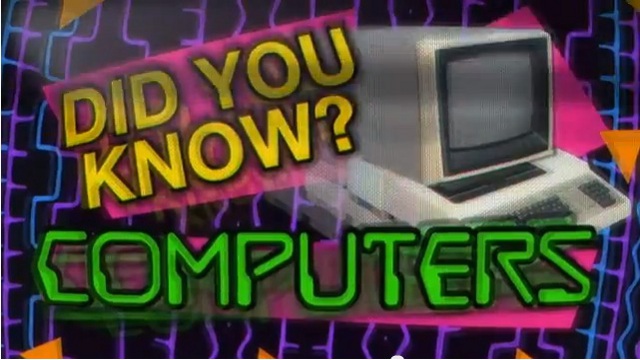 As I mentioned on the podcast a few weeks ago, Clayton Grey, No High Scores reader and Don’t Shoot the Food Photoshopper extraordinaire is currently working on Television, an adventure game/WarioWare-esque mashup for the Ouya. Clayton and his partner-in-games Sam Strick recently took the Most Surprising award in the Create game jam sponsored by Kill Screen and Ouya. Clayton was kind enough to answer some questions via email and give a glimpse as to what life is like for independent developers looking to make a go on the Ouya.

Once you’re done reading, be sure to head over to their Kickstarter for Shift, a single card CCG currently in development.

You describe Television as a WarioWare meets Myst endeavor, and the trailer shows off a number of different games that would have been at home on my television during the 80s. Can you expand some on what the game’s about and how the adventure parts mesh with the mini-game parts?

The basic idea is that you can approach the game from a couple different angles: You can casually play around with a myriad of quirky short games, or you can dig in and “read between the channels” for a more complex adventure experience. You can procure items from shows and introduce those into other shows. There will be secret shows and secret channels. We enjoy games about exploration. The idea is to provide a meta-goal for those that pick up the scent. But there’s no hand-holding and no serious tutorials.

How did the idea for Television come about?
The idea originated during a brainstorming session. We had after the contest announcement to decide if we wanted to put down our current work and have a go at this contest. We had already kick(start)ed in for a developer kit, so it made sense from a lot of perspectives. I did some brainstorming about what we could do. We already have a lot of ideas for projects at various stages of development, and this was an opportunity to do something different.

I had an idea that I had been tossing about for something called the “OUYA? Oh Yeah!”. It was an idea for something to put on a load screen or an interstitial between moments in a game. Totally random. The idea was that there was this weird insecure japanese gameshow host that keeps apologizing for how bad he is at his job. Players would see these questions cards that he would present, but they wouldn’t necessarily make any sense with one another.

We can’t remember the exact moment when it clicked, but once it happened, it just sort of flowered. We really hashed out a lot of the core game then and there. What are channels on TV? What kinds of shows are there? Which would work as games? Since then we’ve continued to flesh it out and nail down some of the core systems we need to make the games work.

What made you decide to switch from iOS development to Ouya development?

There haven’t been a lot of avenues open to independent developers, and that’s changing fast. We decided early on that we would make lots of game for lots of platforms – some of them analog. We’re doing digital games and boardgames. We think it’s important to be diverse. Mobile is a good starting point because it’s a big market, but we’ve never considered ourselves “mobile developers”. The OUYA seemed to have it’s ducks in a row, so we decided to spend the money and get a developer unit.

What kind of technical hurdles had to be overcome to switch development? How is the Ouya as a development platform?

We do our development using ActionScript and Adobe AIR. It’s easy for us to switch platforms from a technical perspective. The OUYA itself has very similar performance characteristics to a mobile device because it basically is a turbo-charged mobile device. Adobe as done an amazing job optimizing their virtual machine, and performance is great once you know what you’re doing! We used the Starling framework to get better performance for 2D on mobile platforms.

What have been the most challenging aspects of developing for the Ouya?

The OUYA team seems to have put a lot of thought into how to make working with the console as easy as they can manage. Right now I’d say the hardest part is waiting for the game data to install while you’re testing on the device. In short, it’s not a challenge, the device is a constraint. It’s not a desktop, and there are definitely things we’d love to do if we had more power. You make creative decisions around that.

Do you have ideas for expanding Television or are you more interested in taking the Create prize money to fund a different game idea altogether?

We’re very flattered to have won, and we’re excited that people were into the concept. The next step is planning. Kickstarter will probably be involved, so the prize money helps, but it’s really a good faith gesture. We’ll need to raise significantly a lot more to make it happen, as we will need to reach out to other tallent to do it in a reasonable amount of time. We’re having conversations.

Many iOS games end up being successful from a download perspective, but fail to make their creators any money. Is the same risk present on the Ouya or is the purchasing infrastructure more creator friendly and less reliant on in-app purchases to make money?

iOS has a known visibility problem. The key is getting enough awareness for your game. For our iOS game, we’re focusing on making a really premium game, because that’s all we can do. It really depends on your business model, and we’re hopeful but skeptical of iOS as a market for game developers. People like to talk about the outliers that made a lot of money, but that’s not an honest picture of what developers can expect. There’s no way to gloss over it. Making money on iOS is hard. There isn’t a single answer. Just make the best game you can afford to make, and really work to promote it and make people aware of it. No easy task.

The OUYA has some key differences. Firstly, the store is curated. That’s a big one. Secondly, they require all games to offer some part of their experience for free. Developers are given freedom to determine how they want to apply that to their game. So we have a lot of flexibility in determining how to monetize. For Television, we’re looking for inspiration from the concept. We’re looking at offering free “local channels” and then offering premium packages similar to cable or satellite. We’ll probably have Pay-Per-View content as well. ?? These are still just ideas, and we’re in the process of working that out. It’s still an in-app-purchase model, but that in app purchase can just be a license for the full game. We have total flexibility in that regard. Super neat.

Now that the Ouya will be available at Best Buy and other mainstream retailers, what’s the best strategy to make sure that Television rises to the top and gets played by all of those people picking up the console at launch?

We’re happy that they’re developing promising partnerships to sell the OUYA. That was a real question when we bought in, and they seem to be doing things right.

Television, like any piece of entertainment, isn’t trying to be for everyone. That said, we’re hoping to reach a broad group of people looking for something new. We feel winning CREATE will be a big boost to awareness. Keeping people informed about development, and telling your story is just as important. It seems the real key to indie game development is about persistence. Just keep making things!

What’s the best way for people to show their support for Television?

Television still needs support: follow us on Twitter and give us a Like us on Facebook. Everybody says that now, but that’s because it’s really important. It’s the best way for us to let you know what we’re up to, so when things happen, you’ll hear about it. We’re probably going the Kickstarter route for funding. That will probably happen in a month or so. So stay tuned!

2 thoughts to “Talking About Television on the Ouya”