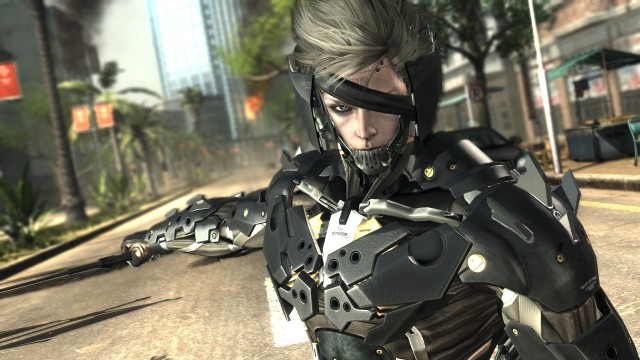 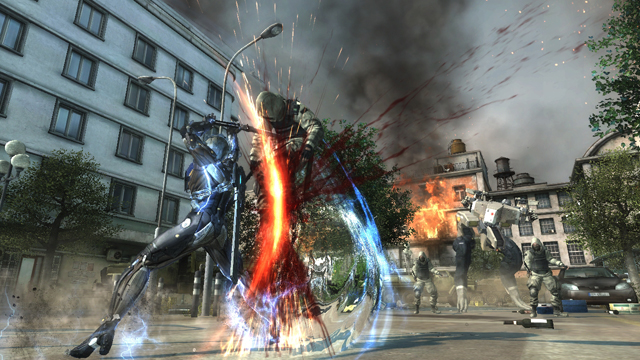 Irresponsible, irreverent, and illogical, Metal Gear Rising: Revengeance is a peanut butter and chocolate proposition for folks that love video games in the classical sense, pairing up Kojima with Platinum for an operatically absurd masterpiece. It is the heir apparent to two of this generation’s best action titles, Bayonetta and Vanquish, and it’s also one of the best and most focused Metal Gear games to date. It’s the kind of video game that makes me want to go out and gut punch every failed Hollywood screenwriter that thinks they can make it in this business by making games more like movies. It’s the kind of game that makes the claim that Japanese design is heartless or passionless look completely wrong, slicing and dicing with a rarified energy and a preposterous- but completely not macho- level of aggression.

With his high heels, eyeliner, and Aqua-Net abused hair, Raiden is a glitter rock cyber-ninja, the blatantly androgynous and homoerotic hero of the greatest electro-chanbara movie never made. He’s had his star turn in the Metal Gear Solid games before, sharing the bill with Solid Snake in Sons of Liberty, but never before has he been so fleet of feet and quick with a blade. Revengeance is fast as a shark, standing in stark contrast to the slower, measured pace and intentionally clunky controls of the core Metal Gear titles. Lightning Bolt Action indeed. The action is furious, with dramatic parries of skyscraper-sized swords and acrobatic counterattacks punctuated by the occasional slow-motion blade mode wherein Raiden can slice through a cyborg assailant and rip its spine out, drenching himself in precious nano-fluids.

Ludicrous, yes. But it’s small potatoes in a game where a boss throws helicopters at you. This is a very, very funny game that’s well aware that it’s a video game, never a movie, despite all of the expected cutscenes and QTEs. Oh, and the first boss? A Metal Gear Ray. This game doesn’t waste your time getting to the awesome, even if it feels like the cutaways and codec calls break up the relentless flow. If you liked the “Gears of War plus 1980s plus a mountain of cocaine” gameplay of Vanquish and the delirious technical qualities of Bayonetta’s combat system, you’ll dig this.

Once you plug into this game- and learn to play it, since this is an old fashioned video game where you need to develop skills- that flow is irresistible and disturbingly addictive. It feels great. You feel like a HF blade-wielding god. Unstoppable. And then there’s a character turn later in the game where Raiden can hear what his combatants are thinking before he slices them into 500 pieces (there’s an on-screen counter). It’s actually kind of chilling.

The writing is sometimes surprisingly sharp, but never too proud of itself to wallow in full-bore pulp ecstasy. A major plot element find Raiden trying to recover brains stolen from wayward children. All of the usual Metal Gear fare is here, like the off-hand Codec conversations. Don’t miss them. There are unexpected missives about “torture porn” horror films, Cambodian cuisine, and how war affects children. There is more questioning about the heroic motives of video game slaughter than just about anything else I’ve ever played. There are very clear messages here, as there are in Kojima’s other Metal Gear titles.

And it looks incredible, like all of Kojima’s work. The visual artistry on display- the production design- rivals and surpasses the best work in the science fiction cinema. It’s military, speculative, practical, and quintessentially Japanese. The environments don’t lie to you about how open they are (which they aren’t), and instead the scenery and settings serve to funnel the player straight down a dizzying flume ride of mayhem, surreal violence, and unexpected introspection.

It’s a grand slam title- every element is pitch-perfect, including the sleazy synth-metal soundtrack that cues up vocal passages at just the right moments to spur you into action. It is a short game- only about six or seven hours- but its all killer, no filler. There’s not an ounce of fat on its bones, no phony open world “agency”, no bullshit “bro-op”, no stakeholder dictated multiplayer. The DLC is genuinely optional and a complete game with no nonsense or microtransactions is on the disc. This is how it used to be. This is how it still should be.

I’ve been down on video games for a couple of months now, with virtually nothing interesting me other than DMC, another old fashioned video game. But Revengeance has completely blown me away by reminding me of the things that I have always liked about video games, going back to playing Atari 2600 games when I was five. It’s raw, unashamed entertainment but smartly framed and exquisitely presented. The bar is set for the remainder of the year.