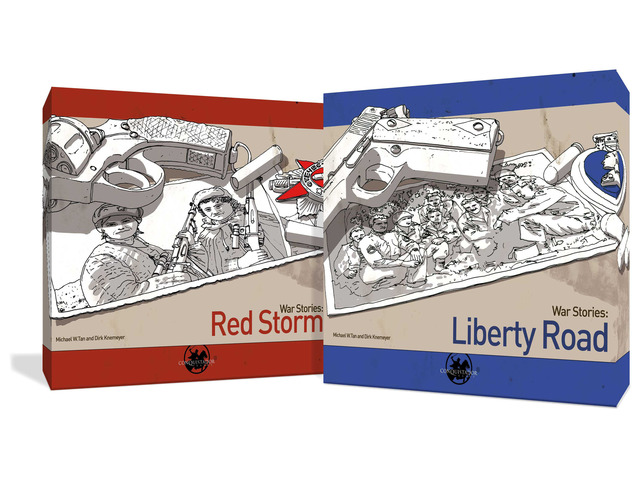 If you have been listening to the podcast you know that we have another game on Kickstarter called War Stories: Red Storm. Actually we have both Red Storm (east front) and War Stories: Liberty Road (western theater) both on Kickstarter simultaneously sold either separately or in one large package.

This is a World War II block game which can also be played as a miniatures game. We have the rights to the World of Tanks Museum minis as well as sculpts from 21st Century Toys for the Liberty Road minis. So basically we have a lot of cool pre-painted tanks, anti tanks, and trucks which may be used in the game. You don’t need the minis to play as it works great as a block only game. But the minis just look damn cool.

The idea behind War Stories is to take what is normally a fairly complex genre (World War II tactical games) and break it down into a very easy to learn and play game with all of the detail and charts and minutiae boiled down into cards.

Check out the Kickstarter videos. I made the videos so if they look cheap — that’s all me baby! It’s already funded but we’d like to keep it rolling.

In other news, I have been knee deep in the development of Tomorrow. It’s winding down and I am really happy with how it’s turned out. We have added stuff like espionage, new objectives, discovery cards, reworked how diplomacy and cyber warfare functions — a lot of new stuff. I submitted the first draft of the “final” manual and when that’s done I will post a link so people can download it.

I can’t wait to show if off this summer.