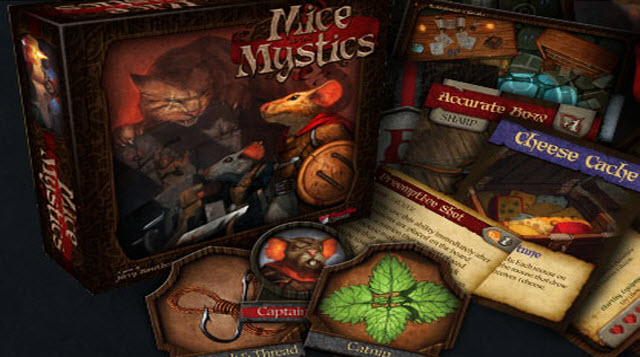 I’m not particular impressed by any aspect of the rules or mechanics that govern Jerry Hawthorne’s Mice & Mystics, a game that has proven over the past couple of months to be quite a blockbuster in terms of sales for Plaid Hat Games. Strip away the unique setting inspired by Brian Jacques’ Redwall novels, The Secret of NIMH and the comic books Mouse Guard and Mice Templar and what we’re left with is a fairly pedestrian light RPG adventure game descended from HeroQuest. It’s simplistic and like the Dungeons & Dragons Adventure System titles, it’s geared toward accessibility and loose rules in order to make for an easy and quick-playing dungeoncrawl that doesn’t get bogged down in tactical detail. There are few unique mechanics beyond the typical move-and-strike fare, I actively dislike one of the key systems and others like a card-based initiative system aren’t interesting. There’s also the usual raft of +1 swords and other typical fantasy equipment and events, although everything is mouse-sized and whimsically rustic.

So it’s a good thing that games are more than the sums of their rules, otherwise Mice & Mystics wouldn’t have much to offer in comparison to games like the D&D titles, Claustrophobia or Descent. This is not a game about the rules. This is a game about the story, and to that end this is one of the best-written and framed adventure games I’ve ever played.

During the first few turns of my first game, I was really disappointed in it. After being very excited to see that Plaid Hat was doing a fantasy game with mice and cats instead of dwarves and orcs and then months of hype and praise, I felt let down and bored despite the great illustrations and excellent production values. The scenario book seemed cool and far more detailed than most, but the first chapter- a more appropriate nomenclature than scenario- just didn’t seem interesting. But this game had something better than a cool set-up. It had a Moment.

The party of mice wound up in a sewer, with a rushing current dragging us all away. We had to try to reach the edge to pull ourselves out, which in game terms meant rolling a star on one of the custom dice. One mouse, Maginos the mage, didn’t make it. But once Prince Collin got his footing, he was able to add a die to the next mouse’s attempt. With Nez and Collin safe, they both reached out to pull in Tilda, who got to roll three dice.

This moment was such a perfect union of simple gameplay mechanics and storytelling that I found it almost touching that it really kind cements the notion of the adventuring party, friendship, and cooperation in a way that few games do. It wasn’t just a “all players must meet X target number” kind of thing, it was a life or death (well, capture- you don’t die in this game) situation and the mice have to help each other. It was vivid, felt very real, and since it occurs so early in the 11-chapter story that compromises the “Sorrow and Rembrance” scenario book it cements the characters’ relationship in a subtle, unique way.

I’ve never spoken of a game like the D&D Adventure System games or HeroQuest in quite that way before, particularly in regard to the characters. I think that’s quite significant. There is a far, far greater sense of continuity and actual character development between the chapters than in almost any other game of this type I’ve played, and it doesn’t require anything like the complex contrivances of Descent’s campaign system to work. It’s not even really appropriate, I think, to call the suite of scenarios a campaign- it is most definitely a story, and it is a story that players tell.

Maybe you didn’t help Miss Maggie early on, so in a later chapter you might have a slightly different situation occur in the kitchen. If you didn’t find the rat disguises, you might not get to trick a group of gambling rats into playing a dice game with you rather than fighting. Some characters, equipment, and abilities aren’t available until events in the story occur- one character can’t be played until you free her from a mousetrap in a particularly exciting scene where she’s immobile, desperately shooting her bow at adversaries until the other mice can rescue her. But my favorite scene is still racing across a courtyard to a tree while being attacked by rats and a rather indiscriminate crow that delights in picking off friend and foe alike- all while the cheese wheel timer had just two slots left before the game ended in defeat. Thrilling.

After playing through half the Sorrow and Remembrance storyline, I was surprised at how the mice felt like fully realized characters- not just an array of stats on a card and a display of accrued ability and equipment cards. I think this is an impressive stride in terms of delivering a board game that is a true narrative experience. You really want to play through the chapters in order and with the same group if you can. Played out of order, some of the branching and variations aren’t as meaningful. The demand for sequentially experiencing the story as written, along with the relative simplicity of the game, makes this an ideal game for families look for something to play with children.

Returning to the ho-hum mechanics, they definitely work even if they’re workmanlike and not particularly impressive. My chief complaint is this whole “cheese system” keyed to die rolls that affect the timing of the game and respawning bad guys. It’s also the function by which players get new skill cards. It doesn’t feel quite right at times, but it’s definitely not worth hemming and hawing about when the concept and execution of the game’s themes are so well defined. There are a lot of gray areas and vagaries in the rules which may irk some, but if you’re playing this game that seriously and with that much attention to the rules- you may be doing it wrong. If you’re not engaging with the story, reading the event text from each chapter, and thinking more about what the game is representing than how then this may not be a game for you.

But for a lot of folks, it seems to be working with sell-out print runs and promo cards escalating in aftermarket value. It’s important to note that Mice & Mystics is going to be supported by expansions and new storybooks that continue the tale. Not to say that what you get in the box isn’t replayable because it definitely is, but because of the way the story is integrated you’re going to want to see more of it not for new mechanics and adversaries, but to see where the game goes in terms of scenario and character development.

All it took was a single moment for me to see why Mice & Mystics is something really quite special and unique in its genre. It’s not the most mechanically compelling game of its type, but it’s by far the most charming and interesting to play through. It’s another feather in the Plaid Hat cap, and it will likely cement them as one of the top publishers of genre games in 2013.