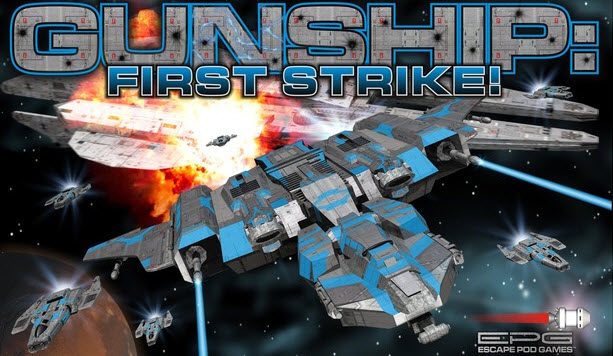 What I like best about Gunship: First Strike, a new crowdfunded spaceship combat title from Escape Pod Games, is how defiantly old school it is. I don’t mean “modern hybrid design with some old school trappings”. I mean that this is a game that you could send back in time and publish in a late era Avalon Hill game box circa 1990 or so and nobody would notice anything amiss. Back then , Gunship would have fit right in with games like Gammarauders, Attack Sub, Naval Battles, or Road Kill. In 2013, it’s anomaly in a sea of circuitous, repetitive, cannibalistic, or syncretic design. That means it’s really not quite like anything else on the market today, for better or worse. It is a singular game designed with a great deal of passion and commitment on the part of designer Steve Wood, and its homespun charm and out-of-time idiosyncracy count for a lot- if you’re receptive to those qualities.

Two to four players take command chiefly of the titular Gunships, sort of a corvette-class attack ship. Each player also has a card representing a fighter escort that provides screening for the gunship, but these craft can’t attack the enemy’s Assault Carrier, the capital-class ships player must attack and defend. There’s an odd mix of abstraction and specificity, with the Gunships represented by a diagram upon which players can slot cards into hit locations representing weapon systems, shields, and armor. But both the cruisers and fighters highly abstracted. There is no map, only three positions encompassing the space near each Carrier and a zone between. This means that the focus is sharply tuned to action- not anything so polite as resource management or area control. It’s a pew-pew and ‘splosions game. 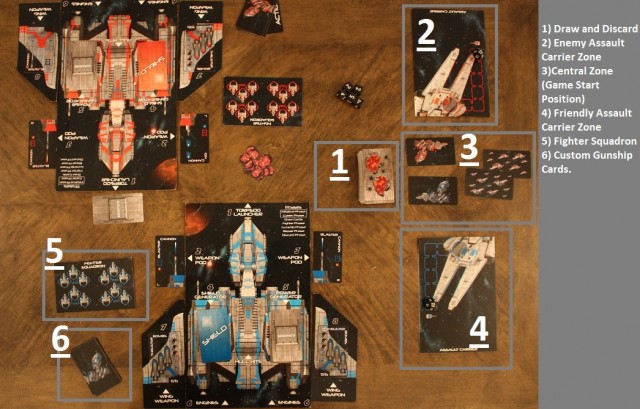 The idea is that you want to get your Gunship over to the other Carrier and drop a couple of torpedoes or thruster bombs on it, knocking out its shields and eventually carving into its hull damage. But along the way, you may want to try to cripple the other player or players by knocking out their fighters in simple, die-rolling dogfights. You can also go after their Gunship to reduce their striking capability. Modular weapon cards might be hit, or you might have to deal with engine damage. You might find yourself limping back to your carrier with the residual effects of an ion cannon shot disabling systems, your weapons trashed, shields depleted, and with your wings blown off but you can land, repair and refit, and get back into the fight.

Time is of the essence, in a way, because in addition to the direct damage the Gunships inflict there is also a card draw at the beginning that does one or two points of damage to each carrier in an abstraction of the ongoing barrage between the vessels. It’s really just a timing mechanic, but when the right cards are drawn, it can result in a tense, dramatic endgame. Or it could end in anticlimax.

Despite the medium-weight rules, which seem to me to be pared down to a still somewhat unwieldy minimum, the game plays light and fast. This is, as stated, a good example of old school American action game design. This is not a hardcore strategy title, it is not rife with tactical decisions and shot through with strategic depth. This is an ass kicking, bloody nose of a game where dice and cardplay mix things up with unpredictability and surprise.

The core mechanics of battle include matching cards with weapons systems to deliver attacks, ranged combat abilities, variable damage, and in the case of the fighters a mild strategic consideration in blocking movement or attack targeting. It’s nothing fancy, and it’s actually kind of refreshing to play a game with decidedly non-clever resolutions.

The production is kind of mixed bag. I would have liked to have seen some better component quality and cardstock overall, but I could level that complaint against any Kickstarter title. The look is fine but it lacks character, and given the potential of expansions, add-ons, campaigns, additional ship classes, and other content I would have liked to have seen a better concept for a game world to contain all of the above. There’s some fluff about the usual galactic civil wars and such, but there is an overarching whiff of the generic that keeps the story material and setting at arm’s length. This is a good game that has a lot of promise, but I’m afraid that the more Spartan elements of it don’t make a convincing case for Gunship as a brand name.

There are already numerous add-ons from the Kickstarter campaign and promos, most of them worthwhile. I particularly liked the crew members, as they increased the asymmetry and customization between sides. Asteroids and experimental equipment demonstrate further the range this game could be capable of and I’m definitely interested to see where else Mr. Wood takes it. If there’s any danger in expanding the game, it’s that it could become more cumbersome and top-heavy when it needs to remain close to the core action gameplay concept.