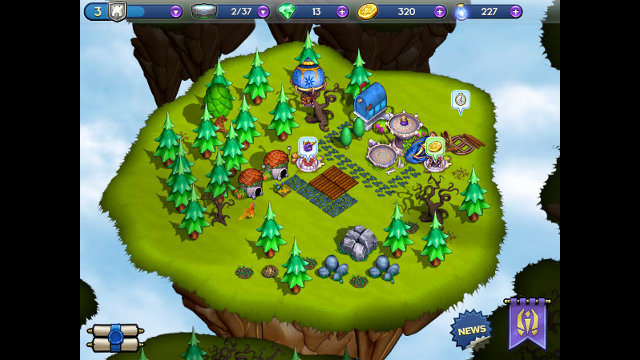 The game I spend the most time with on my iPad is Lost Islands, the free to play Skylanders game from Activision. I don’t usually play free to play games, in fact, with the exception of Jetpack Joyride, I actively avoid them. Lost Islands was another story though, a story with Skylanders in it. Skylanders has three iOS games and a PC game to tie in to the console games, all of which use the figures used in the console games. Cloud Patrol is a shooting gallery game, Battlegrounds is a hex-based, real time action-RPG and Lost Islands is a free to play, kingdom builder. The fact that you can use your figures across all three games made it all the easier to buy more figures for the main game, not that I needed a reason. I mean, come on, this is me. I don’t need reasons to buy toys, but as reasons go, increased utility is a pretty good one.

As I got more figures, my kingdom grew and grew in the usual free to play way. Characters use energy to go on missions, missions that reward them with gold and experience. Gold buys crops which in turn grow more energy. Gold also buys houses which attract Mabu citizens. The more Mabu you have living on your island, the more public buildings you can have. Public buildings and houses grant your kingdom experience. As your kingdom levels up, you can get better houses and better public buildings. As your characters level up, they can go on longer missions that give bigger rewards. Grafted on to all of this is a quest system that rewards you in money, experience and gems, a multi-purpose currency used to buy special buildings, buy new Skylanders and speed up missions and building construction. Finally, there’s a pretty nice “element of the day” mechanic in which Skylanders that match the element of the day get reward bonuses when completing missions and planted crops that match the day’s elements give additional energy. 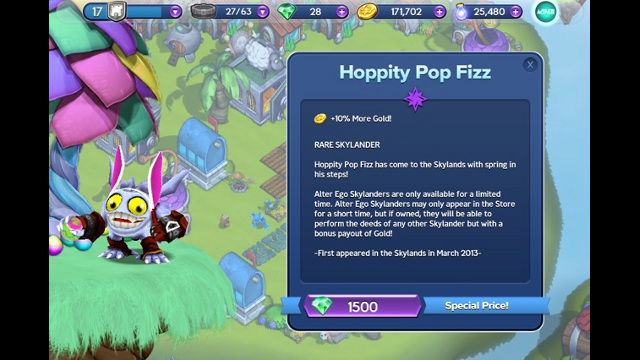 Everything was fine up until a week or so ago. I had established equilibrium in my economy, the best trade off between airships and crops, so that my economic engine was humming along quite efficiently. All of my Skylanders had leveled up to level 10, save for the Easter themed Pop Fizz that I won via the game’s wish stone mechanic. I was dutifully working towards level 30, needing only a keep and a Town Hall to finally finish up all of the quests. Once that happened, I was planning on putting the game aside and letting my kingdom crumble to dust. Cruel, I know, but when one sees the end of the tunnel, one doesn’t dwell on what’s on the other side.

A week or so ago, the game got a substantial update that not only added in companions, special residents of your kingdom that allow you to do new things like level up your characters to level 12 and level up your kingdom to level 35 (once you get your characters up to level 12, of course) but it also added a huge number of kingdom quests. Unfortunately, most of these quests involve the same thing, obtaining various items from all of the buildings in your kingdom. Now, I’m no stranger to these quests, having seen them many times before in this game, but this takes things to a whole new level. 200 snow globes from houses, a hundred armor pieces, fifty books from a library that gives up a book once every seven hours, hammers from the blacksmith, water from the waterworks. Worse still, is that there are multiple quests that need different things from the same place, so the pace of completing quests is piddling at best.

Now, I’m not stupid, I know why they did this. You can buy gold and gems with real life money and then use said gold and gems to get through these quests more quickly. This is a free to play game after all, and while I have been able to successfully play the game without shelling out any money other than for figures, figures I was purchasing any way for the sister product, my purchasing habits are not what Activision is hoping for. 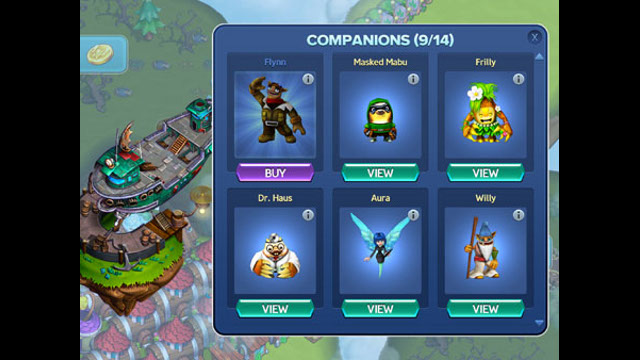 The problem is that I had the end game in sight. Level 30 had been obtained, my keep was under construction and I was on the grind to get enough citizens to get a town hall. I typically don’t have a problem walking away from a game if I’m done with it, but I had put so much time into this kingdom at this point, that it seemed wrong to walk away so close to the end. Now though, I dunno. Now I’m just randomly tapping on buildings, hoping that what I need from it pops out so that I can finish up and have a reason to walk away. If I stick around, I can go up to level 35 and get more buildings which will lead to more quests for more random items and so on, until what? Will it ever end? Is there an end or will the levels just keep going up until Swap Force comes out and they’ll integrate those figures in?

The bottom line is that I need to give myself permission to leave, despite what I’ve got invested. Otherwise, I’ll just be mindlessly tapping, hoping that what I want pops out, when what I really want is freedom.

4 thoughts to “Where Lost Islands Lost Me”