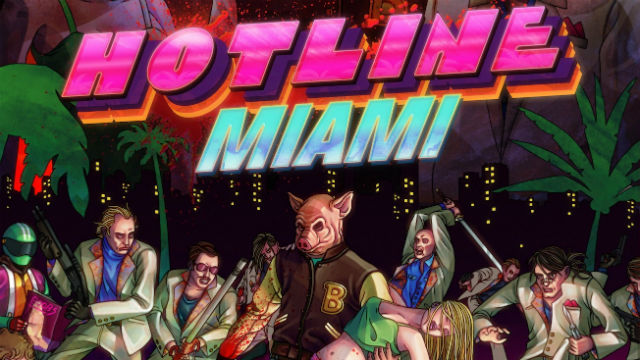 The first time you fire up Hotline Miami, you’ll swear your PC has gone wrong. It’ll likely hang for what seems like an age, and then take you to a title screen burnished with blocky text in Russian against an eye-straining dayglow backdrop. It’s the 80’s. It’s Acid House all over again.

What happens next most assuredly isn’t. An ugly, bearded man will swear at you repeatedly as he teaches you the basic concepts of the game. Sneak up on people by using the building topology to keep out of sight, then eviscerate them or shoot them, or just punch them to the floor and then brain them by smashing their heads repeatedly against a door frame.

And that, essentially is Hotline Miami. Twenty-one levels of appalling top-down violence rendered in cheerful fluorescent tones and backed by a thumping techno soundtrack. Except that it’s very hard to describe quite how something so brutally primal can be one of the most intelligent and knowing games I’ve played in years.

The whole thing is a beguilingly circular, self-referential piece of design. The extreme gore passes silent judgement on the acceptance of violence in games. The unreliability of the narrator is a window into into the virtual worlds that games construct. Even the plot bends back in on itself, but to delve too far therein would being giving too much away.

It’s a hard game, but it never feels unfair, and any gamer could beat it with patience and practice. A single hit will end your murderous rampages, so you need to be careful, using stealth and silence where appropriate and making calls on the right time to go in, all guns blazing.

As a game, just like as a piece of social commentary, what’s really impressive about Hotline Miami is how such a small thing manages to fill so many different shoes. A beat ‘em up. A stealth game. A tactical shooter. A puzzler. It’s all these things and more.

But ultimately the game gets hijacked by its compact and bijou nature. For most of your first playthroughs new guns, new powers, different enemies and novel scenery to interact with will keep you going. Toward the end you’ll notice that all the guns are pretty much the same. So are all the enemies. Many of the powers aren’t really useful, or even fun.

Completists will enjoy finding the considerable quantity of hidden things, and theorists will enjoy replaying the plot for the intriguing ambiguity it provides. Otherwise you’ve got perhaps one or two play-throughs of a two to four hour game.

But who cares. It’s cheap. Play it for its glorious inventiveness. Play it for the violence. Play it for an abject lesson in how much one clever designer can cram, Chinese-doll like, into one small package and then consider how little huge corporations manage to fit into vast, spacious AAA games, echoing like howling ruins in the desert. Just play it.