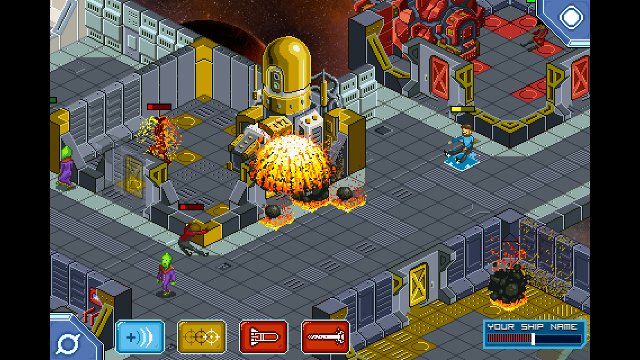 Star Command, the twice Kickstarted combination of Star Trek and Game Dev Story is finally here. Is this the game what was originally promised those that backed it? Not really, although there’s nothing keeping it from getting there. Is it still worth playing? That’s another matter entirely, and unfortunately, the things that hold the game back feel entrenched. In other words, the stuff that bugs me probably isn’t going anywhere. 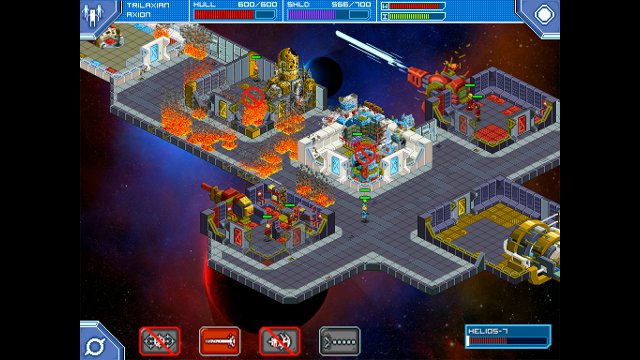 I’m not going to knock the game for the final version of this game differing from the version that people backed simply because I’m not sure how much it’s different from a previewed game differing from a final release. If you read a preview, pay for the game in full as a preorder and then the finished copy doesn’t have in it everything the previews mentioned, that’s the risk you take. You made the choice to give them your money prior to reading reviews. I put Kickstarter in that same category, and this is as someone who has Kickstarted several projects, including the upcoming Torment game. When you choose to support a Kickstarter project, there is an inherent risk that the finished product won’t match what was described, if it ever gets finished at all. Do I think that developers should strive to put in everything they’re promising, or better yet, adjust their promises towards what is reasonable? Sure, but things don’t always work out that way, which is why you need to be prudent when deciding what to back. Should the developers of Star Command been more reasonable with their projections given that they had to run two campaigns in order to get the game made? Absolutely, but that’s between them and their backers at this point. All I paid for the game was three bucks.

I will say though that if you’re looking at what is in this game, do not read the Kickstarter pages. There is no ability to customize your ship based on being tactical or diplomatic. You can pick ship layouts but there is no difference from ship to ship as to what rooms you can build. There are no away missions. There are no diplomacy missions. There is no exploring of derelict ships other than looking at said derelict ship from the comfort of your ship. There are no pets, no artifacts, no alien plants and no equipping of these items to make your crew more effective.

If you’re looking for a deep tactical space battle game, this is not it. If you’re looking for an X-Com type experience in which you juggle the skills of your various crew members in order to have the best chances of success against slavering alien hordes, this is not it. If you want to wait for buttons to recharge and then fight abysmal touch controls and brain-dead AI in order to keep your captain from being sucked out of a hull breach, well, welcome aboard! 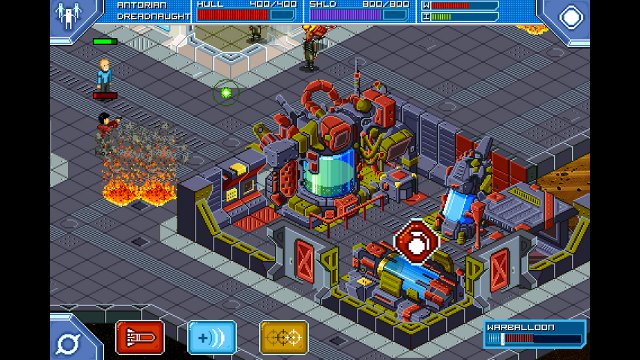 Ship battles involve your ship pointing towards an enemy ship and then waiting for weapons to recharge so that you can play a minigame to make the weapons fire. Depending on what other rooms you have built, you can also wait for your dodge generator to charge up, allowing you to dodge incoming attacks, provided you have dodge tokens. You can also instantly recharge your shields, provided you have a shield token. Oh, one of those weapons also needs tokens, but it’s pretty powerful, provided you don’t screw up the minigame.

During ship battles, the second your shield goes down, and I mean the second it goes down, enemies will board your ship and you’ll have to kill them, assuming your crew can keep themselves alive, a dodgy proposition at best. For one, your crew is incapable of saving themselves. If an alien comes at them, blaster a-firing, your crew will stand there and get shot. If the space that your crew member is actively occupying is on fire, your crew member will mutely burn to death. I’m all for remaining at one’s post, but for Christ’s sake, move over a square to one that is not on fire.

Your crew can fight back, but only crew members assigned to the bridge or the weapons stations. That’s what the medics and engineers get for spending all that time on fancy book learning. As crew members die, you can assign non combat crews to combat stations so that they can become combat crews. Granted, this may mean that there’s no one to man the other rooms, which means that crucial ship systems won’t be available, but it’s all part of managing your ship. 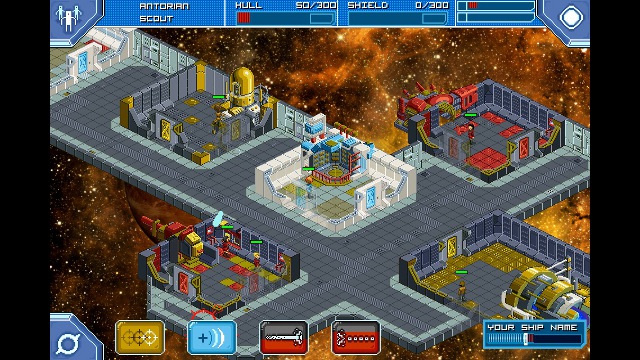 And that’s not accounting for all of the times the game will just up and crash on you. I played it on an iPad and I must have done one of the final missions for something like two hours before getting through it, half of which I spent on reloading the game due to crashes. I know that development is hard, I get that, but I thought the benefit of iOS is that there are much fewer variations, allowing for better quality control. Star Command did not get this memo.

Speaking of the iPad, I simply can not see how you could play this game on an iPhone and not want to jettison your phone out the airlock. The iPad was wonky enough. I can’t imagine having to constantly zoom in and zoom out, not to mention direct crew members from death by rapid decompression on the iPhone’s small screen. Those that backed the game a second time for the PC and Mac will hopefully have a better go of things with mouse control but by then they may have to pony up for additional Kickstarters to get the thing out the door.

Supposedly the PC/Mac versions will serve as test beds for adding new features to the mobile versions, which sounds pretty fishy to me, but whatever. Seems you should just ship your game with what you promised, but again, it’s their business to not meet their promises just as it’s the consumer’s business to decide whether or not they want to roll the Kickstarter dice.

As it stands, Star Command is not the game that was originally promised, nor is it a particularly good game. It can be, so hopefully it will become on, but as it is right now, I’d steer clear of it and maybe get their space strategy fix with Eclipse. I know that’s what I plan on doing.

4 thoughts to “Star Command in Review”