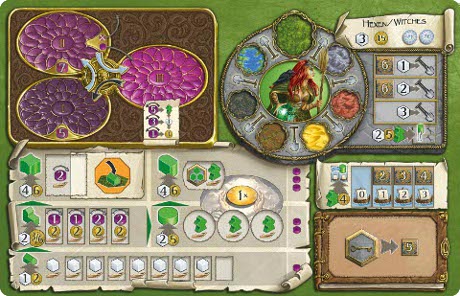 Terra Mystica, the new Z-Man title wherein players representing terraforming fantasy races attempt to change terrain hexes to suit their tastes and build structures on them, isn’t really about building civilizations. There is magic, but this is hardly an enchanting, mystical game. The subject matter is little more than a construct to codify its graphic design and nomenclatures. It’s a game more prone to victory point churning than charming you with its fiction with complex mechanics carrying the day over rich theming or a sense of setting. Terra Mystica is ultimately a game more about mitigating and overcoming restrictions or limitations and incrementally acquiring +1 bonuses that affect standard game procedures. This is a fairly common, high level design principle and it’s not particularly a fault of the designers to utilize it but since this is a mechanics-first game it’s immediately obvious and potentially off-putting.

If Terra Mystica, based on the above, sound very dry to you your impression isn’t far off from the truth. Despite appearing something like a kind of “Advanced Small World” with its Chaos Magicians, Dwarves, Witches, and Fakirs, it is a hardline Eurogame with minimal interaction, no hidden information, and zero luck. Theme is mostly relegated to a general gameplay concept at the highest level and a pair of special abilities or disadvantages for each player race. Conflict is abstracted to the point where friction is generated through four race-to-the-top tracks marking your race’s influence in four elemental cults or by its fixed geography where space is at a premium. High drama in Terra Mystica means plunking a building down on a spot before another player does.

As far as the latter goes, there is a neat mechanic that encourages players to build close to each other to receive a kickback by way of magic power. The magic system is particularly interesting. There’s three “bowls” for each player, and when you gain points you shift tokens into the next one. When they’re in bowl three, they’re ready to spend and cycle back down to bowl one. You can also just throw them out of the game permanently in a pinch. This is one of the more interesting aspects of the game, adding compelling incentives and offering some tough choices as to how to spend your power for maximum effect.

And you’ll be making those kinds of choices often. Overall, Terra Mystica is a heavy, brooding game where turns are defined by choices that fall into three categories: what you should do because of a net gain either in this turn or the next, what you can do but will net you less of a benefit, and what you can’t do at all because of a lack of resources. You’re always one worker, priest, gold, or magic point short. Part of the game is puzzling out how to spend wisely and not come up short or puzzle out ways to squeeze out the amounts that you need to accomplish short term goals.

Usually, those goals are connected to changing the landscape to suit your race based on a rondel-like schedule of terrain types. The further away it is from your desired land type, the more “spades” you’ve got to spend or have available to get it how you like it. Once you’ve turned deserts into forests or whatever, you can spend workers and money to construct a settlement, trading house, temple, sanctuary, or stronghold. Build the stronghold and you get an additional racial ability. Connect a series of four buildings with a total magic value of seven or more and you found a town. Granting, of course, points and a bonus. Temples and sanctuaries also grant you a favor when built, typically cult advancement and yep- a process modifying bonus. 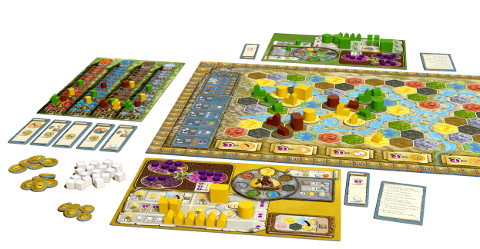 There’s also this cult business going on, with four tracks representing different elemental cults. Plop a priest down on one of the spots and you move up three or two spaces. At intervals, cult advancement also gives you magic. Eventually, you have to have a town to get into the upper echelons of cult leadership and there’s only room at the top for one player in each.

There are other discrete elements, like a river system that screws with the adjacency required to terraform and build. This is another example of how the game uses limitations and how you’ve got to mitigate them. You can build a bridge or you can advance along a shipping track, ostensibly improving your race’s riverboating skills or whatever, and enabling them to build downriver. Your race can also improve their spades by spending resources. Virtually everything you do in this game nets points of some kind, and it becomes a question of what action will net the most points at any given time.

I do not like this kind of “Action 1= X or Action 2=X+1” gameplay because it lends itself to analytical, calculatory gameplay rather than fun, interaction, and drama. That said, I do think that Terra Mystica is a strong Eurogame with some interesting concepts. But that doesn’t mean that I necessarily think it’s a fun game. I’m not sure that it is, and I’ve fortunately played only with friends that I would have fun playing Cootie or Hi-Ho Cherry-O with. I cannot imagine playing this game with strangers at a convention, or with human calculators that insist on taking 15 minutes per turn to parcel out each action, running the numbers and scratching their chins while someone coughs softly in the funeral silence.

This is also a language-independent game, which means that there is minimal text on any of the cards or components. It’s a wise cost-saving measure for publishers that are looking to print games that are saleable in all regions without having to pay for translation services and different language printings, but for the end user it means figuring out rebuses. This doesn’t ease the learning curve at all. I’m usually not too down on language independence because it often is justified, but in a more complex game like Terra Mystica it can be grating. You will not play a first, second, or even third game of it without constantly having to go to the rulebook to decipher a cryptogram that could have been printed on the player cards.

Despite a definite break-in period before players will become competent enough to play an interesting game and decidedly very right-brain gameplay that won’t appeal to some gamers, Terra Mystica is a very well-composed game with some worthwhile ideas. It’s definitely not fluff, and it’s definitely a very well-considered, measured design. It has a brainy crunch, and those that find value in games with the kinds of decisions that this title trucks in will probably completely flip for it. But for me and my gang, it’s the kind of game I’ve seen often where we play a couple of times, nod affirmatively about its interesting-ness, and no one ever requests to play it again. There’s lots of game here, but not much heart or soul. That said, this would be a dynamite IOS game.