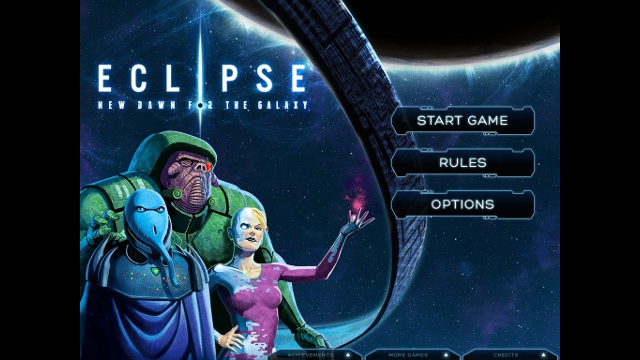 By now, I’ve become something of a master at losing against the AI in Eclipse. I’d go so far to say that no one loses in such spectacular fashion as I do. Truly, I have elevated it to an art form.

Come with me on my journey of life, loss and obscene, alien faced excess. 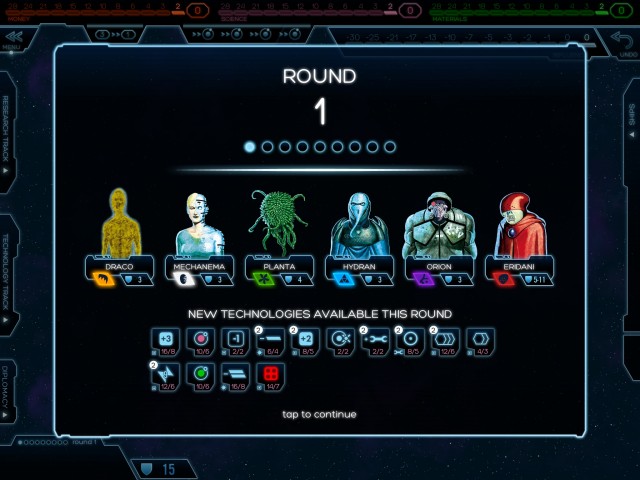 Game 1
After several failed attempts to finish the tutorial game due to the lack of a resume game option for the tutorial, I strike out on my own. Those pasty faced humans all looked so dour, except for the bald guy with the killer mustache who instead looks like a barista in some Brooklyn, hipster haven coffee house. Who wants to be one of those squares when I can be some cool ass alien? As I scrolled through the races, I decided to go with the Eridani Empire, the weird faced guys who get all the cash. They used to be the toast of the galaxy and then fell on hard times. Who can’t relate to that? The allure of those fat stacks of cash coupled with the possibility of bringing a race back from the brink of economic collapse was too much to pass up!

Unfortunately, what I failed to realize is that you don’t get all of that money at the beginning of every round, you just get it at the beginning of the game. After acting out the interstellar version of “The Queen of Versailles” , I was broke. Oh how I spent! I colonized planets, spread influence around like it grew on trees and generally made it rain in my section of the universe. I even had a planet made out of solid vibranium. Vibranuim! Vibranium isn’t even real, so I had to have my scientists invent it and then build me an entire planet out of it. What can I say? Mistakes were made. Here’s a pro tip for you, earthquakes are not fun normally but when on a planet made of vibranium they are super-mega not fun. 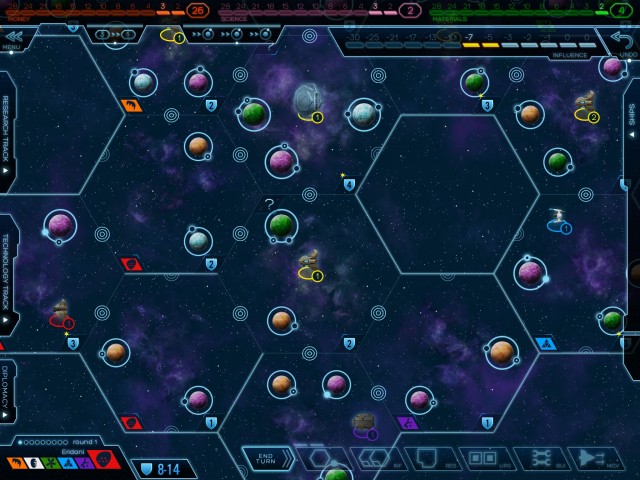 Game 2
Bill said I shouldn’t play as aliens, that I should play a two player game as a human vs a human so that’s what I did. I picked the buttoned up military guy and played against Greenie McCrankypants. Hey look, not as much money, but I can build things and research things. Hey, look, I made some ships. Cool. I wonder what that big round space ship thing in that common space is. I think I’ll send my ship there. What’s up, space station? Why are you shooting at me? Wait, no! GAH!

Ok, so that’s bad. That thing destroys ships. Well, it destroys my ships. Crankypants over there fast tracked plasma missiles so she went on a tear throughout her sectors and amassed victory points like my last game’s player amassed genetically engineered giraffes. Sigh. Back to the drawing board. 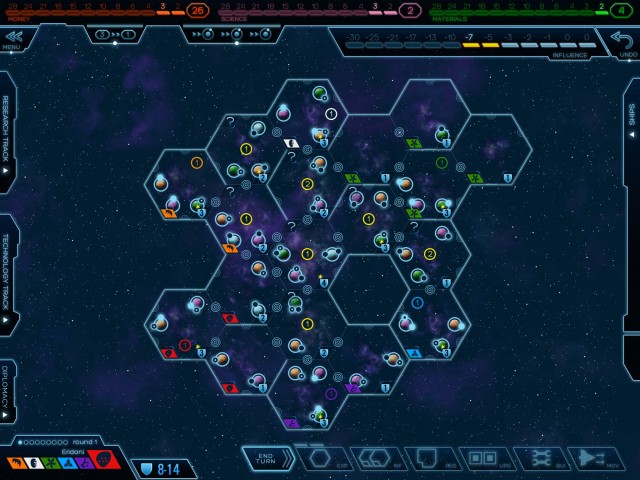 Games 3 – 7
Clearly, mixing up what humans battle what humans has no bearing on what I am able to accomplish, nor does aping my opponents’ moves in the hopes of learning something. At the end of the game, they always have heavily shielded dreadnoughts with plasma missiles that can tear through ancients like tissue paper while I have a nice collection of sectors. They always have like, a billion of everything, except influence. I have so much influence that I can’t influence anything else, despite having the cash to influence things. I end up passing on most rounds and sitting there, impotent. During one game I did bombard some of my enemy’s planets for fun, despite knowing I’d lose which not only makes me a poor loser but a genocidal monster.

Game 8, Maybe 9, Who the Hell Knows?
At this point, Hipster Bob is the only human I haven’t played, so why the hell not? I manage to balance things out pretty well during the game, getting some lucky ancient discoveries and other good turns. I build some respectable ships that can do OK for themselves. On the last round, I scrape together some money to build a monolith and I place one in a sector in a desperate attempt to not only win, but to move along the important neanderthal arms race. My opponent suffers some last minute financial mismanagement and has to remove influence to pay for his empire. I squeak out an all important, first victory with a meager one point differential.

Point margin be damned, clearly this is a turning point in my career as an Eclipse player. The dark days are now behind me and a glorious age of galactic exploration is ahead of me. Fellow humans, join me on our conquest to rule all of the universes, known and unknown! 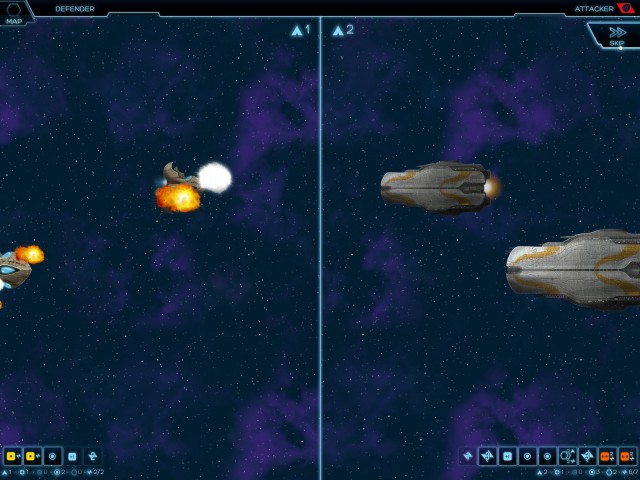 Every Game Since Then
Man, eff those plasma missles.

Clearly, I have no idea what I’m doing. I think that this is a great implementation of what is obviously a pretty complex game, but as someone who has never played it, there are just too many questions that pop up. Like, why do I go long stretches with the only actions available to me the stunted build and move actions? Why do I end up with so much influence that I can’t influence anything else, yet my opponent hovers around the 5 -7 influence range despite having as many sectors as me? Why should I take ancient techs when my opponent ignores them, takes the victory points instead and destroys me every time? Why do all of the humans look like they just tasted something awful?

4 thoughts to “Eclipse and the Art of Losing”