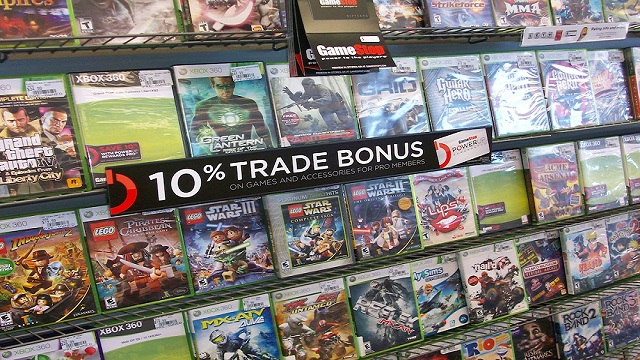 So, a few more cards are now on the table. I’m not going to write much (this time) about the console themselves. Matt already did a fantastic job assessing each company’s sales pitch. Do go read it, if you haven’t yet. (What I find interesting is that in a generation where both platforms are based on x86 architecture, they’ve certainly found ways to wholly differentiate themselves. Bravo!) What I’ve found fascinating to watch since the initial One unveiling and in the wake of Monday’s E3 press conferences is this love affair we all seem to be having with game “ownership,” now that console gamers everywhere are terrified of losing it.

Right now, the One’s current feature list has precisely one deal-breaker for me. The once every 24-hour check-in required for me to keep access to my games library is a non-starter. It’s a poison pill that will kill the console and I’d be shocked –SHOCKED!– if this policy doesn’t change by release (or within the first year). Take that away, however, and much of the vitriol directed towards the Xbox One has to do with the fact that it’s a blatant attempt to end the era in which we “own” our games, thus killing off the used game market as we know it. This is troubling to people who feel they’ve done quite well by its existence — Gamestop, people saving $5 on a used game, people spending $60 on a game knowing they can get a chunk back for their next purchase by turning it around right quick. It’s been a decent ride for you folks and Sony is shrewd to make continued embrace of this model a marketing point for the PS4. It’s still all going to end, though. It’s a matter of time.

Let’s pretend for a minute that the PS4 flops and when it goes, the used game market evaporates with it. (I do not think the PS4 will flop.) Do I feel for you that it’s going away? Not really. I’m a PC gamer, man. My hobby has all but already transitioned to this whole license purchasing thing. Yes there are solid alternatives, like GoG, but Steam owns the PC gaming roost and, with it, we stopped “owning” most of our games quite a while ago. And you know what? We’re all getting on just fine that way. In fact, our platform of choice is thriving, thank you very much.

Take away the check-ins and the only thing particularly new about what the One is purported to do is that it still wants the disc to be a part of the equation. I realize that’s important to your Gamestops and Best Buys, but why on earth would I buy the disc just to install it on my console and never touch it again? Why wouldn’t I just download the game as I do on Steam? (Yes, yes, exceptions for gamers not living in a broadband world. The One’s already bending you over anyway.)

READ ALSO:  This War of Mine Review

Whether the One’s model works or not will depend entirely on the same thing Steam’s model relies on — offering value. Steam isn’t the harbinger of doom. It’s not an enabler for a draconian future of oppressed gaming. It’s a service that successfully offered PC gamers a trade-off. I agree to ditch the cardboard box and plastic disc and tie my games to a personal account that Valve owns and in return I get convenience (purchasing games from home), easy access on any PC device I own, and dirt cheap bargains on existing catalog. This is all good enough for me (and a hoard of others), even if I do still miss good manuals… but those went bye-bye a long time ago.

(Please note that this post has nothing to do with game quality and the impossibilities of AAA game development. That’s another story, one I’ve been railing about for quite some time. Games shown off for the One at the E3 presser that I care about? Zero.)

EDIT: Check that. One. Witcher 3. Which I’ll play on the PC.

What it comes down to is that I can’t muster up much Internet-rage about finding ways to preserve the Culture of Ownership. More and more I feel like it’s mainly out of habit that we care so much about having ownership of such highly disposable products. For most of my life (and yours too, I’d imagine), media-based entertainment has required the acquisition of things. Music on cassette or CD (or vinyl or 8-track). Games on floppy or optical disc. Movies on cassette or optical disc. You bought it, you owned it forever or until you sold it or gave it away.

There was something comforting in that fallacy. And make no mistake, it is a fallacy. Media gets damaged or degrades. Tech gets abandoned. It all goes eventually. And that’s okay.

I’m about to be 39 years old. When I was a wee lad playing Starflight, Wasteland, and earlier Ultimas all the way until my relatively recent adulthood I have believed that my life would be incomplete if I couldn’t go back and access these games whenever I wanted. What if 65 year old me wants to become the Avatar One. More. Time? What if nobody ever makes another good fantasy D&D game like Baldur’s Gate II? I want my kids to have these experiences! I need these games to be a part of my future! AHHHH!

Sure, it’s nice to have a few choice titles on the shelf to be nostalgic about, but we don’t need to carry this stuff with us. None of it. Ownership of our media is overrated. And console fans should know that better than anybody. When was the last time you fired up a game for the original Xbox or Sega Genesis? Console games have always come with expiration dates. Not owning discs is not going to destroy gaming any more than the rise of legally downloadable MP3s destroyed music. What’s really happening right now is that the ecosystem surrounding how you purchase and play games is changing.

I remember a period in my young adult life when I would go to music shops with my buddies and pour through the used CD sections. Most of those stores are gone now and of those that remain, I really couldn’t be less interested in browsing all those scratched and cracked jewel cases. It wasn’t the apocalypse. Apple came along with the iTunes store and I thought it sucked so I ignored it and then Amazon came along with a better offering (MP3s and legitimate deals on whole albums) and I thought, “This works for me.” And it worked for a lot of people, so much so that iTunes adjusted their model too. I ended up buying and downloading a whole lot more $5 albums, at far better value than the new or used CD market offered, than I ever had in my life. And then Spotify came along and my album buying habit has all but ceased because I can pretty much call up whatever I want, whenever I want, and it doesn’t cost me a dime. True, I could lose access to all that stuff on Spotify tomorrow, but if I did, what have I really lost? The music isn’t going to go away. It’ll come out in some other form or factor and if the value proposition is good enough then I’ll adopt it. If it doesn’t, I’ll move on to something else.

And, you know what? Most people know and understand that. This isn’t really about the sanctity of the used games market. It’s about value. What really bothers people is that used games have been the place for console gamers to get value in a market that pathologically overestimates the value of games. I get it. Just don’t confuse the two. Getting value isn’t tied to the existence of used games. The Xbox One? Maybe it’ll provide a good value proposition for gamers and maybe it won’t. It probably won’t right away. But if it doesn’t, something else will and people will flock to that. Nature abhors a vacuum.

We talk all the time about how publishers need to “get with the times,” but there are times, and this is one of them, when we, as gamers, need to do the same. Yes, absolutely lobby for your rights to get good value for your gaming dollar! I’m not advocating that you throw money at bad value. (Read: the host of “shitty” dudebro games MS expected us to salivate over at the E3 presser.) Just don’t make the used game corner of your local outlet the rallying cry for your rights as a consumer. That’s a red herring. The days of you going into said shop, saying “hey” to the friendly bloke behind the register, and grabbing something off the new release shelf or browsing the used games collection? Those days are ending, just as they are for music and film purchases. And, yes, there are good things we’re going to lose when it goes, but no one ever said change was a wholly positive thing. There are costs and benefits to all change, but ideally the benefits outweigh the costs. Most often, they do. It’s precisely what motivates this sort of change.

The world is moving on. And if the world of gaming evolves into something that doesn’t interest you? Big whoop. You’ll find something else to be interested in. One thing we’re not short of in modern society is diversions. These aren’t things that require outcry, merely an even-minded assessment of the value of your entertainment and an understanding that times change. In the meantime, I’m casting off the shackles of ownership. There comes a point where having possessions means that they start owning you instead. Tossing all my game boxes and plastic discs, all this “stuff,” to the side in favor of on-demand versions of the same products that I can access where and when I want, even if I don’t truly “own” them, doesn’t make me feel repressed. It makes me feel free.

40 thoughts to “Tuesday Pontificat’n – The Ownership is Overrated Edition”