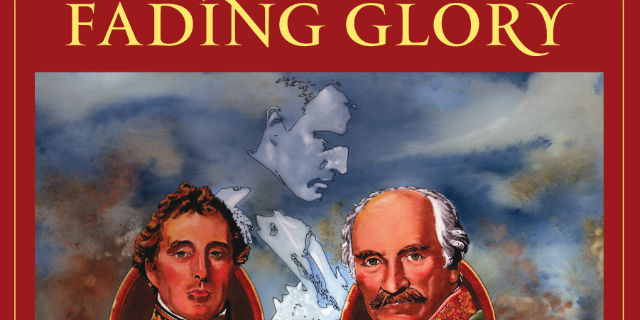 I’ve always wanted to like traditional hex and counter wargames more than I actually do. The idea of recreating the strategic intricacies of historical battles is wonderful, but the execution too often involves hundreds of counters, irritating mental maths and quickly becomes dry and stolid. The aspect of Generalship they seem to reward is logistics rather than strategy.

Enter Fading Glory. It’s a collection of four scenarios based on Victory Point Game’s Napoleonic 20 series which is simple to learn, has no more than 20 counters per side, and will play in an hour or two. It’s been given a visual makeover by GMT who’ve added lovely art, mounted boards and a new scenario, Salamanca, not in the original VPG lineup.

It’s a luscious package, a cut above the bland art and drab components that most wargames are saddled with. Unfortunately the revision process has completely screwed up the rules. It really isn’t a difficult game but with rules sections that are never used, discrepancies between the rulebook and the player aid and often confusing terminology, neophyte players are unlikely to realise that. It should be simple, but has been made maddeningly inaccessible.

Thankfully GMT has already addressed most of the issues with a FAQ. Yes, they should have got it right the first time, but in this instance the publisher deserves to be cut some slack. Not only because are GMT the nicest, most gamer-friendly publisher in the business, but also because Fading Glory is an excellent game.

When hex and counter games get it right, what results is an absorbing compound of puzzling over maneuvers, planning ahead and strategizing with the undeniable thrills of raw chaos. In the past, smaller scale games have had trouble in recreating this heady mixture simply because they lack the potential for variety that keeps things interesting.

Fading Glory doesn’t just break that mold but grinds it into powder. For starters you’ve got four distinct scenarios here, each with its own board and counter set. Then you’ll find that they have super-fast “historical” variants based on late battle positioning, and other alternative history options to explore. Add some optional rules such as face-down counters for fog of war and personalised leader counters which completely transform the way the game plays and you’ve got a recipe for enormous replayability.

But the game is compelling even without all of these options. The standard rules set has zones of control and a combat resolution table and all the things you’d expect of a stripped down hex wargame. But it does two simple things that make it incredibly exciting.

The first is that each side has a morale track, which wears down as units are defeated in combat and results in a loss if it reaches zero. Nothing new there. The catch is that these points can be spent for a significant advantage: extra movement, more favourable combat odds or a better chance of reviving destroyed units. Morale is rationed incredibly thinly – it starts at less than ten and rarely increases – so spending it is like amputating fingers. But the temptation to blow it all to achieve one decisive action is a constant torment. 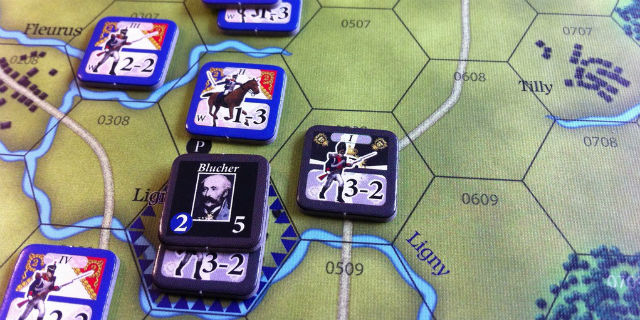 The other is that adjacent units all have to fight each other: there’s no ganging up on a single victim if it has supporting counters close by, and no passing up a combat just because the odds are unfavourable. This makes every movement phase where you’re in striking distance of the enemy a maze of thorns as you desperately try to plan around the eventualities and buy a slight advantage, and it means the game punishes mistakes with extreme severity. It also seems appropriately Napleonic, since it would seem difficult to coordinate the monolithic formations of the time with a light enough touch to avoid engaging nearby enemy.

There are other small touches of period flavour, such as the ability of cavalry to counterattack or withdraw before being assaulted by infantry and a lovely no take-backs rule that’s designed to mimic the not infrequent blunders of command and control that plagued the age of rifles. Each scenario also has a small deck of event cards related to the way the battle unfolded. But on the whole, and perhaps appropriately for a game at the one counter per division scale, there’s not a lot beyond the scenarios that make it feel historically Napoleonic.

And annoyingly, having built such a wonderful framework for them, it’s the scenarios themselves which are the weakest link. They just don’t seem to have quite enough valid strategic options to explore and regrettably the most famous battle, Waterloo, is the worst offender in this regard. I guess it’s the same old problem of insufficient variety that so plagues other small wargames. But thankfully the tactical nuances in Fading Glory are sufficient to make up for slightly staid strategy.

The remaining two scenarios are set in Russia, the historical Borodino and the alternative history Smolensk. All of them follow a slightly unusual pattern of allowing several turns of pre-battle maneuvering and buildup before forces get close enough to actually clash. And when they do come to blow, all hell can break lose as the dice mercilessly crush your tactical options. It’s not so much the combat mechanics that are responsible for this. They correctly reward the use of overwhelming force, and crowding enemy units before combat. Rather it’s the big morale adjustments you get when you manage to break a unit. But as a commander, you feel largely in control and the sudden swings of fortune add considerably to the thrills and charm. The small number of pieces mean there are relatively few dice rolls, but almost every one feels crucial to success.

It’s unfortunate that the game made such a mess of presenting the rules, else we’d have had a strong contender for the best-ever introductory wargames on our hands. As it stands we’ve got a fascinating game which utilizes creative tweaks to a tried and tested formula and wraps it in a manageable package that should give seasoned gamers of any stripe hours of pleasure. The martial glory of Wellington and Napoleon might be on the wane, but on this evidence their gaming stock is as strong as ever.