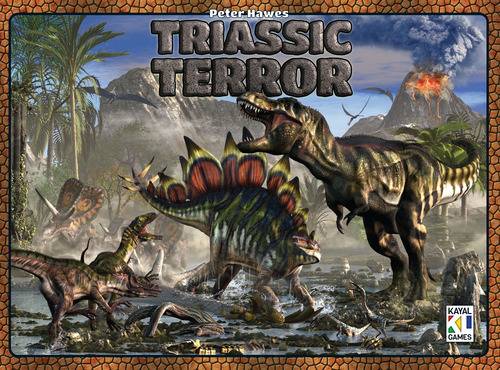 Triassic Terror is a new area control game from Australian designer Peter Hawes, who did the somewhat underrated War of the Roses: Lancaster Versus York a couple of years ago through Z-Man Games. This time, the historical setting is dialed back several milllions of years and the publisher is Eagle/Gryphon, but Mr. Hawes has delivered another quality design with some very old school German game sensibilities that may likewise wind up under the radar and underappreciated. It’s one of those games that really should sell itself with the always awesome dinosaurs theme, but the competition in the area control genre is stiff- this game is up against greats like El Grande and more recent masterworks like Chaos in the Old World.

With its work cut out for itself, Triassic Terror still manages to impress with a highly refined design that’s unique enough where it counts, and not just because the titular terror of rampaging Tyrannousaurs, Pteranadons, and Velociraptors that give the game a very nasty edge. As in most area control games, the idea is to have the most of your pieces (in this case dinosaur herds) in certain areas (three-tiered concentric environments with differing terrain) to score points at intervals throughout the game. It’s a six to nine turn game, and it moves fairly quickly with familiar players thanks to some smart streamlining that doesn’t foreclose on thematic details like losing dinosaurs due to adaptation if a herd moves to a new environment. I like that the game supports six players, which is becoming too rare these days, and it still plays in a reasonable amount of time even with single game veterans.

Key to this streamlining is how Mr. Hawes handles the action selection in the game, condensing pretty much every kind of action that is typical for this kind of game in a set of six action tiles that are displayed on a turn order chart. Migrating pieces, splitting herds into new groups, adding to existing herds, and taking control of the common predator pieces are keyed to turn sequence, so you might want to use the T-Rex to clean house in the swamp area you’re trying to dominate but at the expense of going last. Or, you can wait until the next turn in hopes that the T-Rex tile is higher in the order. The valuation of actions such as hatching or migrating can change dramatically when you might be facing a follow-up turn where you’re picking your action last.

This streamlining- wisely paired up with a shifting value mechanic- means that Triassic Terror’s core actions are tightly focused, with each player looking at between one and six options depending on their advantage in the turn order. The tactics of using these actions is where the depth lies, and although it’s great that it’s very easy to get a quick eyeball read of who controls which areas because only one herd can exist in each of the three spaces in each ring of the environment, but this is where some analysis paralysis can easily creep in and slow the pace of the game. Expect to see a lot of thinking as players debate whether moving a herd here will result in X points or there will net X+1 points. I’m not overly fond of this kind of deliberation in games, but the fact that there’s so much opportunity to really wreak havoc on other players keeps things light and malleable. In other words, don’t waste my time over-thinking your turn because I’m going to eat your dinosaurs next turn anyway.

Without a doubt, using the predators to eat and scatter other players’ dinosaurs is big draw of the game, and it adds a great sense of danger. Your herds are never safe, unless you play a once-per-interval volcano tile to lock down a region from any kind of interference. It’s really fun that the predators are controlled by every player, and it’s not uncommon to see vendettas break out with players just destroying each other every turn. With that said, Triassic Terror does run the risk quite frequently of being one of those games where the players who were attacked or attacked the least wind up winning. For those sensitive to “beat on the leader” issues, I’m not sure what’s wrong with that in a competitive game, but you’re definitely going to see that happen here particularly with no hidden information and open values for everything.

The production quality is high, and although some may shirk I actually like that the predators are gumball machine dinosaurs instead of custom miniatures. They’re one of those things that evokes childhood, fun, and there’s absolutely no pretense about them. I wish that the whole game were packed with them instead of the wooden dinosaur herd markers, but that would probably raise the retail price to high and create an awful lot of clutter on the board. The illustrations are good but somewhat murky and the look would have benefitted from a brighter color palette and better typography, but there’s nothing here that I’d regard as a particularly egregious artistic embarrassment.

The problem with Triassic Terror isn’t one of embarrassment anyway. The central issue is that it’s tough to recommend the game over some of the top titles in the well-heeled genre. I don’t know that my group would ask for it over the previously mentioned El Grande or Chaos in the World, but I would argue that Triassic Terror plays smoothly, quickly, and offers enough fun to warrant a look as an alternative to those titles. It’s definitely more “hell yeah” than El Grande is in all of its austerity and it’s definitely less complex than Chaos in the Old World. Compared to some of the other dinosaur games out there, this one eschews the usual evolution mechanics seen in everything from Evo to Dominant Species and focuses more on traditional, old school German game mechanics. It may not be as thematically rich or narrative as some may like, but for an easy to play, appealing dinosaur-themed area control game it’s a fairly differentiated success.