Haunted house type horror board games like Mansions of Madness and Betrayal at House on the Hill tend to suffer from one overriding problem which is that they’re pulled in all sorts of different directions by their requirements. How do you create a game that’s full of both mystery and well-informed decisions? How do you give it variety and replayability with limited tile stock and table space? How do you make it competitive and exciting without giving one player too much power?

The answer, obviously, is to make it into a computer game instead, and have the CPU handle all the fiddly bits for you. Enter upcoming game The Occult Chronicles, currently available to purchase as a playable beta-test. But in a twist worthy of the dark and disgusting gods that inspired the game, developer Cryptic Comet (also responsible for indie strategy titles Armageddon Empires and Solis Infernum) has seen fit to breed in elements of a Rogue-like as well.

In some respects the result is no more than what you might expect. After creating a character with a points-based system and choosing from a number of loose scenario templates, you’re unleashed into a large mansion populated which in turn unleashes eldritch horrors upon you. As you’d expect from a title inspired by Rogue and board games, it’s a turn based affair where you move from room to room on a geometric grid, trying to reach the bottom cellar of the house and defeat the ancient evil lurking therein.

That simple framework could have been a disaster. It could have been a re-run of the most laughable elements of ZAngband where your overpowered paladin squared up against Cthulhu, triumphed and looted gold pieces from his stinking cephalopod remains. It isn’t a disaster. It’s a game where you’ll gnaw frantically at tender fingernails as you wait to die horribly for merely trying to open a door.

A big part of what makes it work is the writing and presentation which are absolutely top-drawer. The game has a wonderfully self-aware line in dry parodies of Lovecraft and other popular horror tropes, and balances perfectly between the yawning pits of becoming ludicrous and becoming comedy. There’s a lot of text, and you’ll learn to read almost all of it, because it’s excellent.

The words are well supported with comic-strip style pictures which walk a similarly fine line between humour and horror. And the designer has crammed in not just every Lovecraft reference you can imagine, but sucked in everything from the realms of literary and televisual terror too. I spotted sly and often amusing homages to a number of popular horror memes, and I probably missed many more. 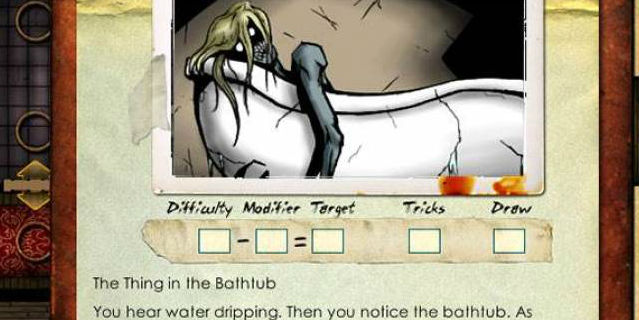 Mechanically, it’s currently a mixed bag although I suspect that’s more down to bad documentation and minor usability niggles than it is to actual problems with the system. Most challenges are resolved with a trick-taking game using, slightly predictably, tarot cards. The number of cards in your hand, the number of tricks you can attempt to take and the number you need to win are determined by your stats and what you’re trying to do.

You get choices. So, if some nightmare denizen of the outer planes comes slithering in to view you might be given a choice to fight it with sorcery or flee. Mentally capable characters will get more promising numbers for the former, while dexterous ones will have an easier time with the latter. But success is never guaranteed, and as the available tricks tick down without a win the sense of tension that builds up is palpable.

The problems start right afterwards. Following a challenge you pick a number of cards to find out how good or bad the results are, depending on if you won or lost. This seems a slightly pointless extravagance, eating up play time for no real benefit.

You can earn experience tokens when you win, and spend them on improving your character, but they’re not tracked on the central screen and it’s easy to forget about the ones you’ve collected. Likewise with the item and trait cards you character can start with or acquire: you need to frequently check your personnel file on a separate screen to properly track your character.

Various other tabs and screens hold other important pieces of information like traits, heroic feats and “bones” (dice). This is where the current documentation and the game interface get confusing. It’s not always clear when and how to use these things. Many of them require dice rolls, but you have to have the right kind of dice before you can roll. It’s all as mysterious as the plot of the average horror novel.

In that respect I guess it’s not that different to a lot of Roguelike games, but it seems a little basic by modern standards. You can’t even use the arrow keys to move: instead they scroll the map and you have to click around like a lumbering elephant.

This is, remember, a beta, so there’s plenty of time to sort some of this stuff out before the final product goes live. And I hope some of it does get smoothed over, because playing this you really get a sense of how a haunted house game really ought to be done, and why none of the current crop of board game contenders have never quite lived up to the billing.

For starters, it’s a Roguelike, and that means permanent death, which is far more terrifying in and of itself than any plastic miniature of a tentacled horror from outer space. The huge variety and random room tiles means each game is a true mystery and creates believable layouts without heavy-handed preparation. Your character can gain and track the progress of quests as you creep through the house, without shuffling new cards into decks or worrying about the right item being in the right place.

Speaking of quests, they’re mere sideshows to the main event, Banishing Elder Gods Back From Whence They Came. But as if the game wasn’t mean enough already, you can’t just build up your character and plunge down. Instead there’s a timer ticking down on each and every move. Every so often these trips a story event based on your choice of scenario which adds a nice sense of metagame to the proceedings. But tick off too many and time runs out, ending your game in ignominious defeat.

The Occult Chronicles suffers from some very rough edges at the moment, but it’s an inventive and addictive take on an old genre, which has the potential to please board and video gamers alike. If you’re interested, get in there now and starting sending feedback to help the developer sandpaper down the splintery bits

3 thoughts to “The Occult Chronicles Preview”