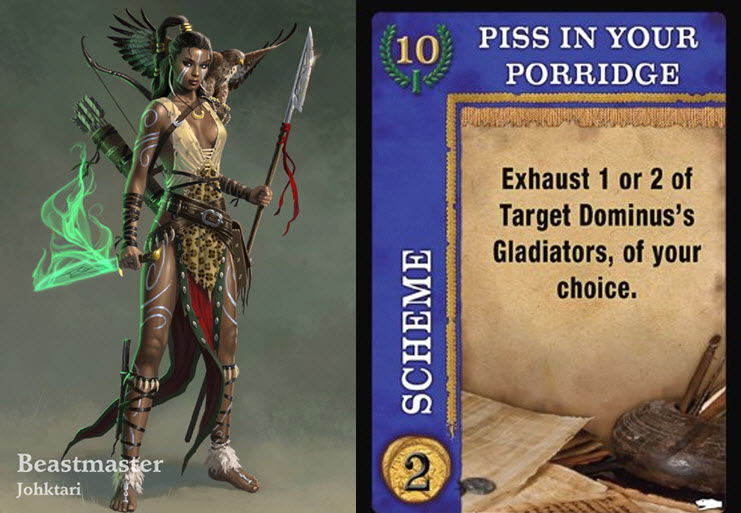 It’s time again to take a look at some expansions for my 2012 Game of the Year picks- Spartacus and Mage Wars were deserving shortlisters and I’m happy to see both of these great titles supported with new content. Let’s cut to the chase and get to the crude locker room humour, shall we?

While playing last year’s surprise smash Spartacus- one of my top picks for the Game of the Year prize- you might have found yourself playing the “Jupiter’s Cock” card and wishing you had it to screw over one of your buddies again. Gale Force Nine has answered your call, and in the new Serpents and the Wolf expansion, there’s a new card called “My Cock Rages On” that will let you retrieve said godly genital from the discard pile. Just be prepared for when the target of your treachery plays a card entreating you to “Accept Deeper Ramming”.

Spartacus was one of the top games of last year not only because it perfectly captured the bawdy, lascivious, and bloodthirsty pulp tone of the Starz television show, but also because it offered a hugely entertaining combination of take-that card play, intense player action, endless opportunities for intrigue, gambling, and of course the spectacle of gladiatorial combat. The new expansion addresses one of my few complaints about that game, that it needed to field more players. With a fifth and/or sixth player on board thanks to the add-on, I feel like the game is where it needs to be and I’d be inclined to call it an essential purchase for fans of the base game.

The new Roman characters are great and there’s a stack of new Intrigue and Market cards (including, of course, some bad-ass new gladiators like The Egyptian). Some of the new Intrigue cards introduce a minor balance mechanic, requiring that the target Dominus either have more or less influence than the playing Dominus. But by far the most fun and exciting addition is a new format for the gladiatorial combat- the Primus.

As in the base game, the hosting Dominus calls players to glory in the arena but in a Primus event, up to four gladiators may participate and the host gets to sort the pairs into teams as they see fit- which can certainly result in some strange bedfellows once relationships, rivalries, and partnerships have been established in the game. Some of the new gladiators are treacherous and can choose to switch teams in the fight, resulting in three-on-one contest. Wagers for victories, injuries, or the beloved decapitations are placed for teams, not individuals. The Primus events rule, and they create even more opportunities for nastiness and some of the subtler mechanics like calling a player to fight with two combatants when they’ve only got one gladiator come into play more.

My only other complaint about Spartacus back in 2012 was that it felt a little long and of course the Primus events and two more players at the table make it even longer. Yet I didn’t seem to notice the time as much with a full table because the game felt more engaging and dramatic overall. I think it’s a fair trade-off to make Spartacus a three hour event with six players, and I’ve actually come to like the game even more overall because of the expansion. It’s one of the most original and highly conceptual games in the past couple of years, and if you liked it before, I think you’ll love it now.

Mage Wars in a lot of ways was as much of a surprise as Spartacus because I thought there was no way such a “kitchen sink” design would be fun, playable, and not completely tedious. It’s a deep, rich game that suffers only from its own scope. It’s difficult to really get at those deeper, richer deposits of gaming greatness without digging in, learning the cards, building spellbooks, and most importantly playing the game with someone else equally committed to exploring what this compelling title has to offer. The core set of four mages offers plenty for most gamers, but Arcane Wonder has given those willing to take the deep dive the Forcemaster and Warlord Spell Tome expansion earlier this year and they’re already following it up with another Spell Tome addition, bringing a Priest and a Beastmaster into the Fray.

One thing that I thought was immediately striking about this expansion, called Conquest of Kumanjaro, is that it has something rarely seen in the board game hobby right there on its cover. The Johktari Beastmaster is an African-ish woman. It’s really refreshing to see a non-white character with a non-European/non-Asian theme. Despite Kumanjaro being described as a sort of fantasy Africa- which could be a potentially awesome and original fantasy setting- the Priest of Malakai is just a boring old white guy.

She comes equipped with a spellbook with lots of cool thematic elements- hunting bows, lots of animals, and an expected focus on the Nature school throughout her conjurations, enchantments, and incantations. The Beastmaster has a couple of great skills increasing range and mobility and she also gets a Wounded Prey token to drop on a damaged creature, imparting a bonus to all friendly animals to melee it to death.

He, of course, hails from the Holy school with lots of typically clerical light magic, defensive buffs, and healing effects. There are also the expected Knight and Unicorn allies. His big unique ability is to place a Holy Avenger token on one of his creatures that imparts a serious life boon and a nasty bonus for retaliating against an enemy that damaged a friendly creature during the turn.

I really like the Beastmaster character and anyone that plays green in Magic: The Gathering will certainly have an affinity for her spellbook. The priest is good too, but he doesn’t feel quite as unique as some of the other characters like the Forcemaster from the previous expansion. Nonetheless, more characters and new spells to add to your collection can’t be a bad thing, right?

As I stated in my review of the Forcemaster and Warlord set, it can be. This is already a big, sometimes overwhelming game out of the box and like I said here, if you’re not really digging into it with another players or a group of players then you’re not going to get the most out of it. Let alone bringing a bunch of new spells and characters into the mix. I appreciate that Arcane Wonders includes a sort of “stock” spellbook for each character so it’s not like you won’t be able just to pick up and play, but if you’re not entrenched with the game then the new deckbuilding opportunities might be lost on you.

I’d say that it’ a definite “yes” for those that are already getting a lot of play out of the core set and the first expansion but want to bring something fresh into it. For those just now dabbling in the game, playing casually, or satisfied with the core set then it may be best to hold off on picking it up until you can fully integrate the new elements into the larger game. The Necromancer and Druid are up next, and I’m be interested to see what their spellbooks and abilities look like. Mage Wars is a great game that deserves the time it takes to savor.