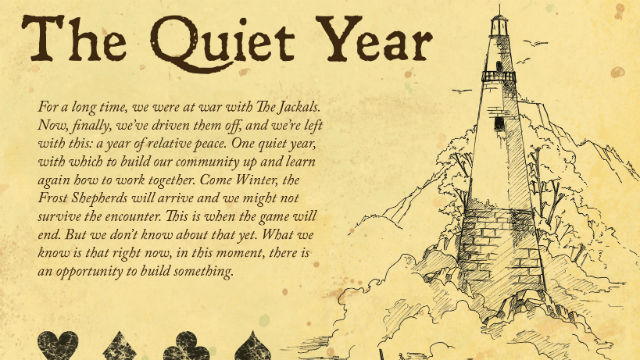 The world is full of things that should not work, but somehow do: pineapple on Pizza, or mixing opera and hip-hop, or making jokes about death. Some examples are personal, others largely universal. And to that last list we can now add a game called The Quiet Year.

The Quiet Year calls itself a map-making game, but it isn’t really, even though you do make a map as you play it. A lot of people seem to refer to it as a role-playing game but it isn’t that either, since it actively discourages you from the minutiae of its character’s lives. It’s one of a small but growing group of storytelling games, where a simple structure is used to explore the player’s imaginations.

All games share the same basic setting: a year in the life of a small post-apocalyptic community. They’ve just survived one war and at some point in the next twelve months another will begin, ending the game. What happens in between is up to you, a deck of playing cards, and some pencils and paper.

The setting is left deliberately light on detail. At the beginning the players collaborate to chose a physical setting for their community and flesh it out with a few key details. Some wooden huts, for instance, built near a poisoned lake in a forest clearing, short on food. These details are drawn on paper to begin the map that will be the focus of the game. What ended modern civilisation is not explained, nor is the founding of the community or the nature of the conflicts that shape its past and future.

This lack of detail feels very strange at first. With such a minimal framework, players start out grasping for foundations on which to build their tale. Plentiful examples in the short rulebook help a bit, but the whole thing is just too overwhelmingly strange. Not to mention the social awkwardness associated with telling a collaborative tale, not wanting to speak out with a bad idea, or accidentally choosing a wrong narrative turn and annoying your peers.

To try and combat this, the game then proceeds with players taking highly structured individual turns. First they take a card, look up its meaning in the rulebook, and choose one of two options listed to resolve. For example the six of diamonds says that outsiders arrive in the area, and asks that player to decide either why they are a threat, or how they are greeted.

It’s these cards that are the heart and soul of what makes the game work. The designer is clearly some sort of terrifying psychic. Or possibly he spent a very long time refining the choices on them to make sure they were likely to mould in to the evolving nature of the story. Either way, it’s the cards that suddenly provide the missing pieces of structure that the players need to work with.

And they’ll grasp on to those structures like they’re drowning in the limitless seas of their own imaginations. Grasp the structures, haul their bodies up onto the land and start to build. What began as awkward, hesitant suggestions will become stronger, more confident, start to interweave with one another into a coherent whole.

And this is where the cards reveal their majesty. The first few times you play the manner in which the questions and choices they pose will mirror things you’ve already mentioned in your fragile narrative threads and help you explore and strengthen them defies belief. I guess there are things about a post-apocalyptic community that are more likely to come up for discussion than others: finding food, avoiding predators, other survivors. But it still feels just a little bit like magic. 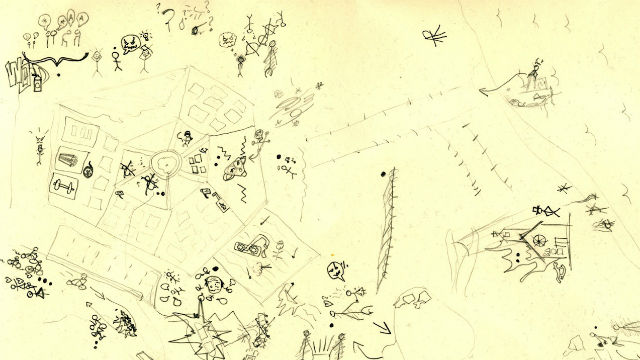 Once they’re decided on the effects of the card, the player then gets to choose from introducing a new thing to the map, starting a discussion about something that affects the community, or beginning a project, the progress of which is tracked by counting down a dice.

Through both card and action, the active player is totally in control: they decide how the card is interpreted and how their chosen action impacts the game. Discussion isn’t forbidden, but the clear intent is to keep it limited, leave the active player in charge and thus keep the game moving along. Other players can signal dissatisfaction or disagreement with the active player by taking something called Contempt Tokens.

The purpose of these tokens is simply to remember disagreements. They’re an interesting idea: there are curious social dynamics around accruing too many, or indeed too few of them which can start to leak into the game. They can be put back into the pool if someone feels the Contempt has been atoned for, or spent to allow a player to make a deliberately selfish decision.

But they’re the one thing in the game that doesn’t seem to work very well. Players are generally more interested in collaborating to make a compelling story to have serious disagreement or indeed to spend their Contempt to do nasty things to the community. There’s a shared goal to move things forward and that makes major disagreement rare. Or maybe I just played it with polite people.

Eventually the cards begin to dwindle and at some point, late in proceedings, the Frost Shepherds arrive and end the game. Their nature is left as obscure as everything else in the metagame, for the players to explore and decide themselves. As you do so, you’ll realise that you’ve told a tale of extraordinary richness, full of detail and wonder and drama. And you’ll wonder how those bare-bones mechanics helped your group fill in so many of the blanks you started out with.

There will still be blanks at the end. The sudden conclusion will undoubtedly leave many unresolved crises, unexplained mysteries and unexplored areas. But then again, so do most of the best stories. It’s disappointing, but strangely satisfying. And you’re left with a filled map to remember your exploits.

You can play the game with minimal household equipment. Buy a rules pdf, stick it on your smartphone and you can play it anywhere. Alternatively there’s a properly produced version with text on the cards and spiky contempt tokens in a little bag. The designer takes seriously the idea that his games should bring people together: if you want to buy The Quiet Year, or another one of his games, you can pay for it with good deeds.

I like this game a lot. I like the way it helps people pull the gossamer threads of a story they never knew existed out of thin air with minimal effort. It’s easier to pick up and play than trendy storytelling RPGs like Fiasco. But it’s not for everyone. Many of those I played it with were hardcore board gamers, most were quite suspicious of such an open ended game and some remained so after playing. But others joined the flow and watched their minds blossom into strange and wonderful shapes. Take a Quiet Year to yourself, and find out where it takes you.

One thought to “The Quiet Year Review”