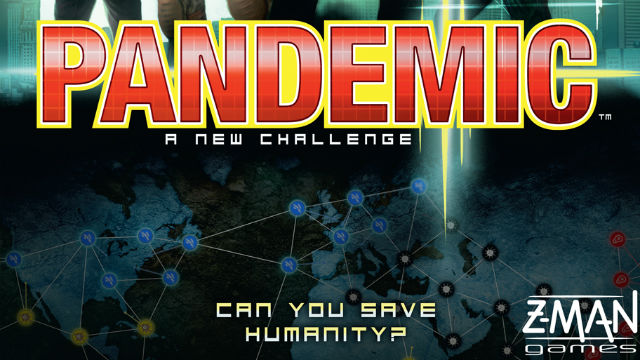 Pandemic was the co-operative game that launched a thousand flabby imitators. The genre became fashionable and designers and publishers started churning out identikit games to satisfy the kind of uncritical, rabid demand that only glaze-eyed, obsessed nerds can muster. Most were awful, and the few co-op games that really satisfied did so by breaking the mold and doing something different. And in the morass, Pandemic went out of print and kind of sank out of sight.

But now its back in a spanking new edition. New art furnishes the board and cards, and the wooden disease cubes have been replaced by transparent plastic in suitably lurid colours. The gameplay, aside from a couple of new role cards, has hardly changed. And we’re here to see if we can remember just why playing Pandemic made the co-operative model so appealing in the first place.

Each player gets a random special role such as scientist or dispatcher, and the team must pool skills and resources to travel the world attempting to cure four lethal diseases that have somehow arisen simultaneously to plague humanity. How this happened is not explained. Neither is why the governments of the globe have seen fit to fund no more than four individuals to fight this crisis. But this is a European-style game after all, so we’ll forgive that and get down to business.

The meat of the game is that players travel from city to city, trying to accumulate a set of matching coloured cards to find a cure for the disease of the same hue, while firefighting outbreaks by curing groups of infected individuals in places they pass through. It’s full of the sorts of checks and balances you’ve seen a hundred times before: the tug between accumulating or spending cards, a limited action pool with tons to do, co-ordinating board positions to swap resources.

Where Pandemic really takes off is its chillingly realistic disease model. If too much infection accumulates in one place, it spreads, increasing the amount of disease in adjacent cities. Which may, in turn, trigger the malady in that city to burst and splatter over its neighbours and so on, in a repulsively virulent chain reaction.

That’s bad enough, but naturally the game goes to considerably length to make this as likely as possible. Normally, each turn, a few cities get extra disease by flipping cards off the top of the infection deck. But the other deck, the player deck, is loaded with horrible epidemic cards. Draw one of these and the discarded infection cards get put back into the main deck. But here’s the kicker: you don’t shuffle them back in, but shuffle them and put them on the top so all the cities already diseased are in line to get another dose all over again.

These linked mechanics are what really sets Pandemic apart from its many imitators. They all share the basic concept of a situation that gradually gets more and more out of control as the players struggle to contain it. But in Pandemic, the problem doesn’t simply rise at a relatively gradual rate, it can suddenly and unexpectedly explode. The situation can transform from one of relative stability to utter chaos in the space of a single turn. And that means every card draw carries with it the delightful aroma of seat-edge terror. 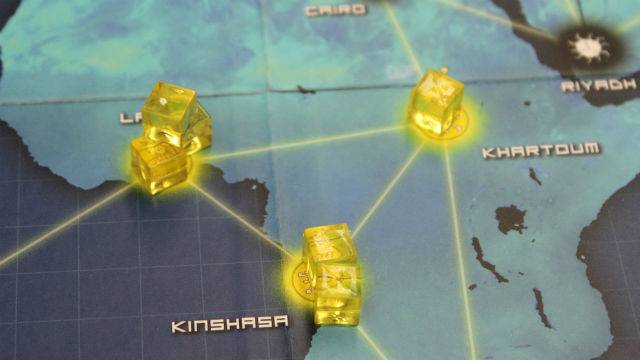 You might imagine this would suck all the strategy out of the game, but it doesn’t. The fact that infections go back on top of the draw pile means card counting can make a big difference. As can doing your level best to ensure that cities don’t accumulate enough disease to cause an outbreak or, if that’s just not possible, at least make sure that adjacent spaces aren’t in a situation to kick each other off and spread like wildfire.

But then again, while player decisions do make a difference, it’s here that the game starts to fall foul of the problems that bedevil the genre. If the decks are loaded against you, you’re stuffed no matter how skillfully you co-ordinate your globetrotting mercy missions. Some people don’t mind this, but personally I find the idea that you might have lost before you’ve ever drawn a card rather off-putting.

Worse, the strategy isn’t really deep enough to avoid the dreaded alpha-dog syndrome in which the most experienced or skillful player just bosses the others around. And they agree to playing second fiddle because it’s in the groups shared interest to take the best option and thus the collective win. It’s an all too common situation in co-ops, and nothing is more guaranteed to suck all the fun and cleverly wrought tension of the game. Pandemic offers a feeble sop in the form of individual roles with their own powers, but it doesn’t really help.

Some of the more complex and varied co-operatives that came after managed to overcome these inherent problems basically by throwing in detail, variety and dice. When you’ve got a bigger number of interlinked decks, more decision points and the mechanics between them are mediated by un-stackable, random dice it gets harder both to see an unarguably “best” choice at any given point, or to believe that the starting situation is predestined for failure.

Pandemic, though, is a European style game through and through and that means it’s at pains to be as simple and quick as possible. And it is: it’s easy enough that my eight-year old could play it with me, and games play to conclusion in less than ninety minutes, sometimes much less once you’ve practiced with the administrative overhead of the game.

That is, of course, a sword that cuts both ways. While stripping back the mechanics means the game struggles to overcome the inertia inherent in the co-operative model, it does make it wonderfully accessible. And in happy coincidence, many of those people who might easily be turned off a board game due to perceived inaccessibility are also delighted by the idea of playing a non-competitive game.

And that’s Pandemic’s saving grace. It’s possibly the ultimate family game, easy to get into, difficult to beat and free from the acrimony that unfortunately creeps in to competitive gaming even in the most loving families. It’s even slightly educational, thanks to that clever chain infection mechanic and the geographically accurate board. If you’re gaming with gamers, and in it for the long haul, pick another co-operative game. For any other situation Pandemic is the original, and still the best.