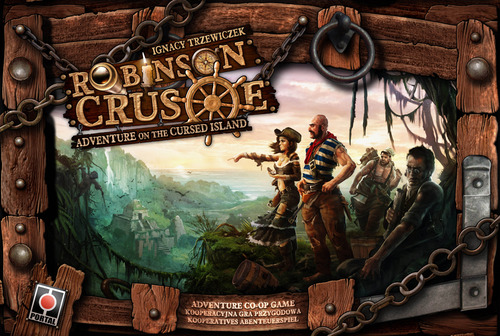 When we talk about hybrids in terms of game design, what we tend to mean are American-style, narrative-focused and explicitly themed games that have accrued certain mechanical and design elements of the “Eurogames” sensibility. Robinson Crusoe: Adventures on the Cursed Island, designed by Polish designer Ignacy Trzewiczek and published in the US by Z-Man Games, approaches the concept of hybridization backwards. Despite how it may appear on the surface, this title is really a “hardcore”, complex Eurogame. Paradoxically, it is also one of the very best adventure games that I’ve ever played. Its idiosyncrasy means that the design references Agricola more than Talisman, its genius is that it manages to create a tremendously malleable, modular survival story rife with life-or-death decisions, branching narrative paths, and a more complete sense of setting than many other adventure games are able to manage with reams of flavor text or illustrations.

For many gamers, the co-op trend has run its course and undoubtedly some will groan when they hear that Robinson Crusoe is another “us versus the game” title. This would be a grievous mistake. Mr. Trzewiczek’s design, which essentially has not so much to do with the Daniel Defoe novel as it does a general “stranded on a mysterious island” archetype, manages to create a stronger, more meaningful sense of collusion and codependency in its mechanics than other games in its class. Other gamers may balk at the fact that this title runs on a worker placement chassis, claiming that mechanical construct is somehow anti-thematic, but that again would be an error of prejudice. You can’t tell me that it doesn’t make holistic narrative sense to indicate by worker placement that the Explorer is spending the day hacking through the brush, looking for a river to build a dam across while the Cook is out foraging for wood and food sources.

One to four players take on the roles of these and other shipwrecked survivors, each with a number of special talents and each with a special invention that they can share with the group if they decide to build it. There are also options to include a Man Friday and a dog to aid lower player counts or to make the game easier for a full group. On a turn, players essentially place two pawns on the actions they’ll take for the day: dealing with event card-driven situations, hunting the native fauna, building accommodations or makeshift inventions, exploring new island tiles, arranging the camp to improve morale, or simply resting. The trick is that if you only place one pawn to perform the core building, foraging, and exploring actions then you’ve got to roll three dice to see if you succeed or not, if you get hurt doing it, and if you draw an event card. Bring along another player’s pawn or one of the helper pawns earned in different ways throughout the game, and it’s an automatic success. You really have to come together in a meaningful, thematic way if you’re going to survive.

This means that division of labor, situational awareness, anticipation of coming events or shortages, and keeping pace with each of the six scenarios’ timelines is essential to a successful group strategy. But then there are matters such as weather die rolls at the end of each round that may cause you to burn up all your wood if it gets cold or to discard your ruined food if the rain destroys the roof of your ramshackle shelter. Then there are the occasional booby-trapped ruined temples, in which treasure-seekers might find a useful weapon or tool and discoveries earned from venturing deeper into the island’s interior. Morale is a constant concern, and it worsens as players become injured and exhausted. 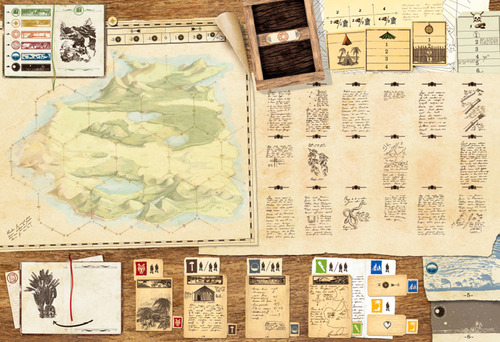 All of this detail comes at a cost. This is a quite complex game with lots of things to consider at any given time and one of the only complaints I have is that the rulebook isn’t the best at explaining it all and the cards create a host of potential FAQ candidates. The complexity and occasional confusion are absolutely worth it for the rich level of detail and story-building that this game accomplishes. I don’t even really care if the game tops four hours, or if someone spends too long trying to work out how we’re going to get an extra food to make sure someone doesn’t starve while also building a roof. It’s immersive in a way that few Eurogames have ever been. It all comes back to the stories this game is capable of telling.

The six scenarios are outstanding, ranging from a simple castaways setup to a really awesome one telling the tale of a failed expedition to exorcise a cursed island. The ship wrecks and the survivors that make it to the beach go about the task of building crosses on it while an ominous fog rolls in over the course of the game. There’s a Swiss Family Robinson- themed story, a rescue mission, and a pulpy volcano island setup focused on treasure-hunting. And then there’s one where the island is populated by cannibals- one of the more direct references to the titular source material. Player-made scenarios based on King Kong and the voyages of the H.M.S Beagle are already online. It’s just a matter of time before Lost and Gilligan’s Island ones appear.

The great storytelling isn’t just in these scenarios and the special rules that define them, it’s also written directly into the mechanics. One of my favorite elements of the game is how an event card will often offer the player a decision or create a lasting injury marker. These cards get shuffled into the main event card deck, and later in the game that gash you got on your head while digging a pit to store food might come back to reduce your health or morale later on- unless you and your mates spent some time to try to find the terrain type that unlocks the Cure invention. Or you may be offered some wood at an opportune moment- only to find out later those poor materials causes your roof to take damage. This is a brilliant way of maintaining storyline and making events have resonance throughout the game. It also creates immediate short-term goals to mitigate loss or damage. 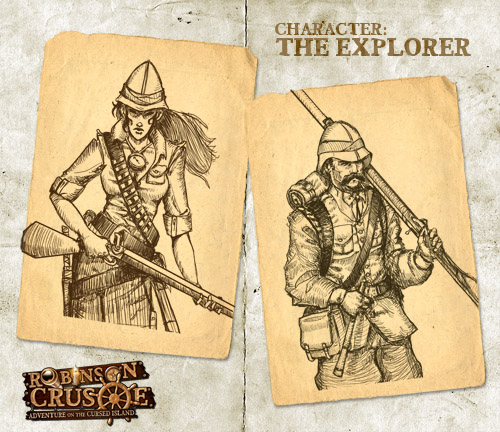 Beautifully produced, wonderfully illustrated, and atmospheric, Robinson Crusoe is also one of the best looking games of the year. It’s the kind of title that sits on your shelf and when you see it, you think “oh man, that game is really awesome”. Hands down, it is the best game that I’ve played this year. It’s a bona fide masterpiece of adventure game design- very modern, very evolutionary, and very innovative. I’ve played the game every day since I received my press copy from Z-Man, with other players and also by myself- it’s on track to become one of my favorite solitaire games. I find myself still wanting to go back to that island again to try different characters, different inventions, and just to see what happens as the stories unfold.

7 thoughts to “Cracked LCD- Robinson Crusoe: Adventures on the Cursed Island in Review”