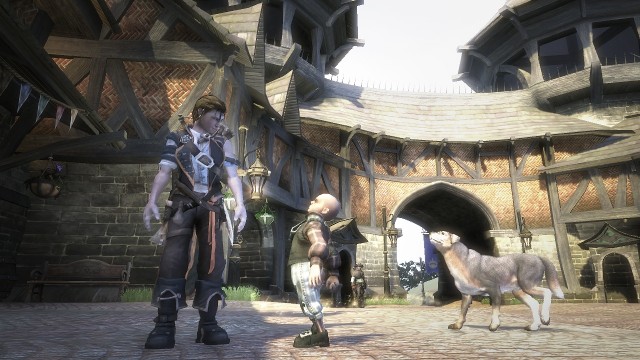 Editor’s Note: This is the follow-up to this piece regarding my time in Albion as a woman. This one gets more into the possibilities of video games as tools to give folks an idea of what it’s like to live as another gender. Unfortunately, it’s pretty blatantly cisgendered so I apologize for appearing ignorant or dismissive of those whose gender identification doesn’t break down into ‘male’ or ‘female’. Had I to do it again I’d be more inclusive. Alas, I’m not a big fan of rewriting history, so here it is.

Right, so Tim the sex crazed husband is no more, sacrificed at the Shadow Temple in a quest for an achievement. Shortly after dropping Timothy off in the underworld I met Jennifer the traveler. Jennifer the lesbian traveler to be more specific. I liked her, she liked me and despite her being from the upper class, which means she requires a nicer house, she conceded to marry me.

Now, Jennifer is exactly like Tim in that she wants sex a lot, and she’s the only one who makes noise during the act but for some reason I find this perfectly acceptable. In fact, I’ve grown quite attached to young Jennifer and don’t mind at all traveling home to give her a gift or spending time with her.

I realized the other day though that even though I picked a female when I started the game, I was dressed as a man (mostly because I hadn’t found a place that sold nice women’s clothing), I acted likea man, belching and farting for laughs and I was married to a woman. Basically, I was playing a man.

I have since remedied that by buying clothes that show off my girlish figure, a figure that needs some toning down due to my penchant for gourmet Filet Mignon pies, and by getting pigtails to further accentuate my womanliness, but the whole thing got me thinking about whether a role playing game could truly provide a different experience based on gender without stumbling into various offensive stereotypes about male and female behaviour.

Now, there have been games in the past that give women lower strength ratings and higher wisdom ratings or something along that line, but the truth is that most RPG’s treat men and women the same. Sure, you may have a line here or there to remind the player of their gender, but I can’t recall any game that was played differently based on your gender rather than a game that simply reacted differently to you based on your gender.

There’s no doubt that men and women think and approach problems differently. Certainly there is commonality there too, as well as folks crossing gender lines in how they approach things, but I think it’s still safe to say that men and women approach things differently. Is it possible to craft a role playing game around those differences? Men’s brains seem to be wired better for math and science, women’s for language and writing. How would you design a game that stresses these skills yet doesn’t have quests like “The king needs to know what 6 times 4 is!” or “Some bandits have stolen the prince’s term paper!”

Quests aside, can you create a living, breathing world that reacts to the player’s gender to the point where they have an idea of what it’s like to be a member of that gender? Would players even want that? In my limited time in Fable 2, a game that treats male and female characters alike, I read so much into the romantic harassment I was receiving that I had to mentally turn myself into a man just so that I didn’t find it bothersome any more. If I was playing a game where, as a woman, I was getting less gold per quest than my male, adventuring counterparts would I keep playing? Is that even valid or just another example of a stereotype that a game like this could easily fall into?

In the end, it’s a moot point as most of the people making the games are men, which makes it difficult to make a game that tries to present a world from a woman’s point of view. I have no doubt that there are designers out there smart enough to present choices to the player that build off of various conceptual starting points to problem solving. I do have doubts that men could present a female gaming experience that didn’t devolve into some male fantasy world of lingerie and pillow fights.

The real question though is if it even matters. If you’re just looking to have some fun, are these ideas even relevant to what you’re looking for? Probably not however if you’re looking at games as a place where game presentation and player choice can give them more insight into how people relate to one another, then I think there’s a real potential here to see how the other half lives, so to speak. Fable 2’s implementation of your dog scratches the surface of marrying emotional resonance with player choice, but it’s still miles away from what would be needed to truly get into the guts of how men and women treat each other, and are treated differently by the world.

As the game progresses, it will be interesting to see if my gender makes more of a difference or if I make more subconscious choices to play her as a man. I’m going to try not to, but I didn’t know I was doing it in the first place, so I can’t say with confidence that I won’t do it again. Those pigtails should help.