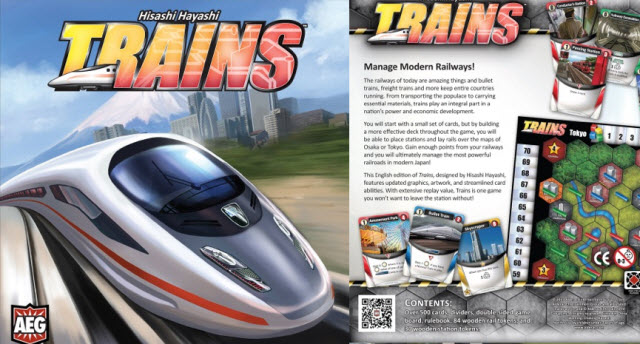 Hisashi Hayashi’s Trains, just released in the US by AEG, is a very good game that unfortunately has an indelible issue of identity. You simply can’t discuss this title, which is effectively a deckbuilder that drives rail game inspired board play, without Dominion. Even if I did not mention it, every single aspect of this game’s fundamental design would still say it out loud. Trains is probably even closer to the cornerstone Dominion design than Ascension, Thunderstone, or any of the other deckbuilders we’ve seen over the past few years. But then again, continually referencing Dominion, even if the design’s goal is to “fix” an aspect of that game like its notorious lack of meaningful theme, is the pandemic problem with the entire genre. It all goes back to Dominion, and the big question mark hovering over all of these designs is to what degree any of them could actually be considered “great” or “significant” when ultimately all are iterative designs typically with a couple of modifications or twists to distinguish them from their forbears.

Even Trains’ post-Dominion stab at intervention isn’t particularly novel. From Starcraft to For a Few Acres of Snow to City of Remnants, the notion of driving a board game with Dominion-inspired deckbuilding mechanics is quite common at this point. So Trains has its work cut out for itself- it needs to emerge as something more than “Dominion with a board”, and it needs to make an argument that this particularly mechanical/processional chassis can run a train game where geography, proximity, economy, and development are as important as cycling your deck and developing a good card mix. It also needs to overcome Dominion’s inability to connect abstract action with concrete meaning as well as its mostly passive sense of competition.

The good news is that Mr. Hayashi’s design is actually quite successful in accomplishing these goals, regardless of how easy (and lazy) it is to dismiss the game as Dominion with a board. Trains is slickly designed with a solid out-of-the-box card mix, a real sense of growth and change as decks are built and refined, and plenty of on-board friction. Some really smart design work creates some unique strategic considerations and the simple rail building makes the game as a whole feel richer, more complex, and satisfying.

The format at this point barely needs describing. You start with a seed deck of ten cards. Seven basic “Normal Train” cards, two cards to build tracks with, and a station expansion card that lets you build a station on a city where you have a rail built. The train cards generate a dollar each when played, and you’ll need money not only to buy cards from the common display but also to pay fees for when you build rails over certain terrain and most significantly when you attempt to build in a hex where someone else has already laid track. Of course, there are upgrades to the Normal Train cards available at a cost, and many action cards generate additional per-turn funds before you flush everything away and redraw to five.

Buying cards to increase revenue, mitigate costs, and capitalize on what is in your deck are of course key concerns. Like Dominion, there are also three types of cards (representing urban development) that do nothing but generate VPs at the end of the game. When it comes to a close, you get points for having connections to cities that have one or more stations as well as connecting to “distant places” on the edges of the map that have a printed point value.

The value of on-board competition can not be overstated in Trains because it makes a tremendous difference. Having to watch what other players are building and weighting the opportunity cost of building an expensive track in a spot where one or more players have already built (thus jacking the price up) is a different game than developing a couple of combos and cycling them for victory points. You may not be able to outright block another player in Trains, but you can certainly make things more expensive for them. And in a game where money is tight and doesn’t accumulate, that’s a powerful ability.

Waste is a key factor in the game as well. Playing a Lay Tracks or Station Expansion card puts a do-nothing Waste card into your deck. Playing one of those cards to build where someone has already broken ground before you not only incurs a financial cost, it also puts an extra Waste into your deck- the cost of competition. As the game progresses, decks naturally become more and more choked by Waste, throttling them down and limiting their growth potential. There is a pass action whereby you can throw out your entire hand and send any Waste back to supply, but it can put you down a turn on the competition. Other cards effectively let you recycle the Waste into money, card draws, or other benefits- provided you can keep control of the mounting uselessness in your card pool.

I really like Trains, particularly as a three or four player game which is something that I definitely don’t say about Dominion. But I can’t shake the feeling that this game should be- and could be- more than it is. As a proof-of-concept, the idea of a rail game driven by deckbuilding totally works. But it needs to be more than just Dominion on a board, and hopefully with expansion it can be. What I don’t want to see are expansions that are little more than additional maps and new cards that aren’t much more than modified versions of the cards in the core box. I’d like to see more train game elements incorporated into the mix like deliveries, demand, goods production, and other aspects. I think it can be done, and since AEG is great about supporting its card game lines with expansions the possibilities are at least out there.