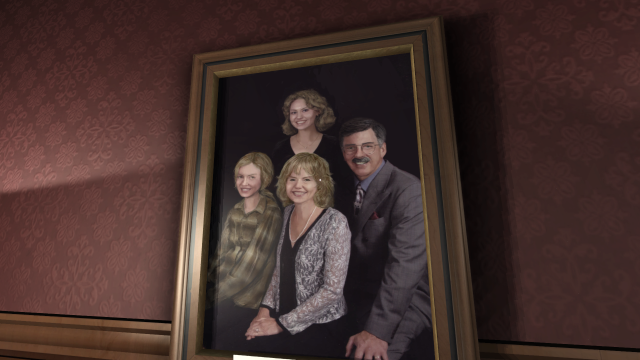 You arrive at the doorstep of a mansion. Your parents recently moved there with your kid sister but you are seeing it for the first time because you have just arrived from your backpack trip across Europe. It’s dark, stormy, and the place looks like it’s been ripped out of a King novel (one of the good ones). No one is home. The lights flicker. The TV is on but it’s just white noise. You enter the house looking for signs of your family.

It’s difficult to talk about Gone Home without venturing into spoiler territory. The game, if you insist on calling it that, is all about the story. There are no controls to speak of, no inventory to rifle through, no health meters, no reflexes are required, your amazing hand eye coordination is meaningless, and there is nary a weapon in sight.

Ah, so it’s an adventure game!

There is no “adventure” here, either; at least not in the typical way we tend to view adventure games. There are no “puzzles” to solve, no riddles to think your way through and no dialogue options from which to choose. If you thought a game like The Waking Dead was devoid of actual game mechanics then Gone Home will feel like a school project.

But that’s part of what makes the “game” work. In Gone Home you are merely along for the ride; a passenger on a ghost train that only reveals itself as you muddle your way through a seemingly abandoned mansion one room at a time.

READ ALSO:  How About a Crusader Kings II Contest?

Is that enough? Is sitting down in front of your PC for two hours (literally) and piecing together an interesting story worth your $20? We like to debate the merits of “value” of a game when discussing its critique and while I still strongly believe that price has no place in the evaluation process of a game, (then again neither do stars, ratings, or any other ridiculous measuring stick) but in this specific case you need to at least know what you are getting into.

Gone Home is short – two hours short, but that’s somewhat irrelevant. More than that, the writers know you are playing a videogame where you are wandering alone inside in a spooky abandoned mansion that looks like it should be a terrifying place to wander around alone – it plays on that emotion at every possible turn. And this is where it’s difficult to really talk about Gone Home without giving anything away, and I do think you should play the game, which is really all a “used to be game critic” can offer, right? I’m glad I played it, but I’m not nearly as happy that I spent $20 to do so.

That said, the writers and designers of this game deserve great praise for their ability to tell an engaging story via spoken dialogue (journal entries), sound effects and music, Post-It notes, and by strategically placing mundane objects around the house that help you slowly piece together what happened to the family that lives there. It’s an amazing achievement that the writers can tell such an emotional story via post cards, letters, and travel brochures. As far as pure storytelling is concerned Gone Home is equal to and in most cases is far superior to anything you see in today’s so-called blockbuster videogames. Of course since the game is all about the narrative – it better be damn good or it simply won’t work.

But I can’t help but feel a little manipulated by Gone Home. Not because of its length or its lack of any real gameplay, but because it knows…the game knows I play videogames and it knows it IS a videogame and it takes that fact that uses it against me; when you strip that away you are left with a sad, emotional and ultimately wonderfully told story trapped inside a mediocre game.